With athletes training in quarantine, taking regular COVID tests and competing in empty stadiums, Tokyo 2021 will be an Olympics like we have never seen before. 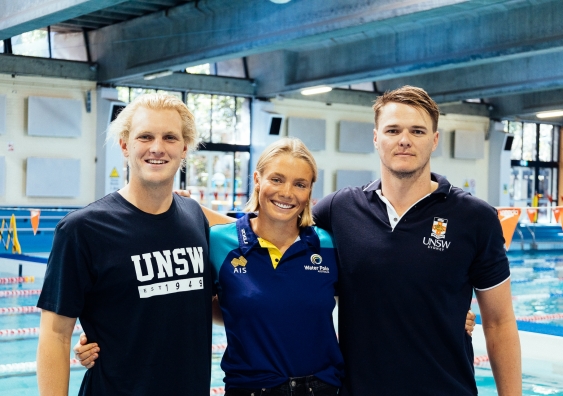 It’s the Olympics – but not as you know it. Back in the heady days of Sydney 2000, the city was alive with visitors, the precinct at Homebush was packed with spectators and the streets of the CBD were sprinkled with live music and big screens showing the Games.

Olympic athletes train most of their lives for this experience – to take part in something bigger than themselves and put out their best effort on the world’s biggest stage.

Unfortunately, the athletes competing in Tokyo this year will not have the traditional Olympic experience.

Instead they have spent the past 18 months in limbo, at first not sure whether the Olympics would go ahead as scheduled in 2020, then gearing up for an extra year of training and preparation – much of which had to be completed in isolation.

Through all this uncertainty and instability, the elite athletes at UNSW have maintained their focus on both sport and study, with eight current students and four alumni preparing to compete in Tokyo.

For the seasoned competitors, such as UNSW Commerce student and Australian Men’s Rugby Sevens vice-captain Henry Hutchison, the contrast between Olympics will be stark in multiple ways.

“I think at the last Olympics, it all happened so fast and I was just there as a young 19-year-old,” he said.

“The whole tournament just kind of just went by me and I left Rio thinking ‘Oh, did that just happen?’

“Five years on I've got a bit of a better idea of how to approach it.”

For others, such as Hutchison’s Rugby Sevens teammate and UNSW Arts student Dylan Pietsch, this will be the first Olympics they have experienced.

Pietsch is incredibly proud to be competing at his first Games.

“It’s been five years in the making, so I’m ecstatic – but once you get there, it’s just about looking after that job.

“Afterwards is probably when I’ll feel all my emotions.”

Growing up in the small town of Narrandera in the NSW Riverina, Pietsch never imagined he would one day have the opportunity to represent Australia at the Olympics.

“It’s a massive thing – not only representing my country, but also my people.

“I’m a proud Wiradjuri man, so to represent them and pull on a jersey knowing I’m going to inspire kids and future players is pretty awesome.”

UNSW Arts/Law student and Australian water polo player Amy Ridge has dreamed of playing at Olympics since watching the Australian women’s water polo team win gold at the Sydney 2000 Game as a child.

“This has been my life for five years, my dream,” she said. “The Tokyo Olympics will be the pinnacle of all our careers.”

Also making her Olympic debut is 3000-metre steeplechase runner Georgia Winkcup, who graduated from UNSW with a Bachelor of Arts/Law in 2020.

“It’s everybody’s goal – it’s what we’re all aiming for,” she said.

“It’s not just a testament to my effort and what I’ve been able to do, it’s also the people who have been behind me and believed in me when there have been tough times with injury and setbacks.

“So [making the Olympic team] feels like a bit of a thank you to the people who helped me get there.”

Although the world has been rocked by the events of 2020 and 2021, the Olympics will be an opportunity to show the strength and resilience of the sporting community.

Though they may be performing their incredible feats in empty stadiums, the support of their friends, family and the UNSW community back at home will inspire these athletes to achieve their very best.