A discussion on gender representation in politics has heard Australia risks going backwards if more is not done to help female politicians. 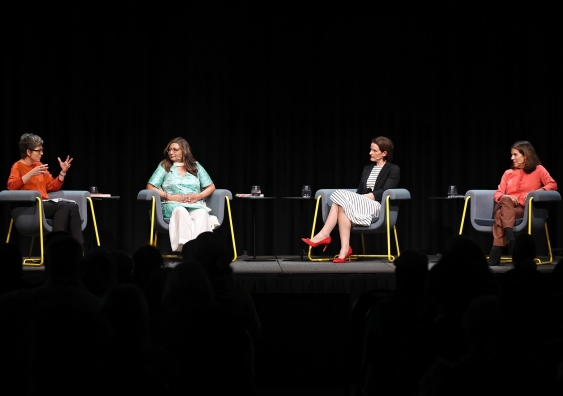 As Australians head to the polls in less than two weeks, Prof Dixon said it was important to “reflect on the role of women in our politics, the challenges and opportunities, and the role of voters”.

Despite Australian women being among the first in the world to gain both the right to vote and the right to be elected to parliament, in 2022, women only make up a third of Australia’s elected representatives.

Former federal MP, Julia Banks, said the Australian parliament can be an unsafe place for women and she wasn’t surprised by the federal government’s handling of the alleged rape of former Liberal staffer Brittany Higgins in 2021. Unlike in the corporate world, there are no systems in place to protect women in parliament, Ms Banks said.

“There is literally nowhere in that house for women to go. Particularly women where there is a power disparity, where they’re not an MP. There is nothing they can do, there is no structure in place for either of the parties.”

Dr Faruqi spoke of the “vile, visceral sexism and racism” she received when she first entered politics. “It was a bit of a shock to the system coming into parliament and facing that hate and racism every single day,” she said.

Independent candidate Georgia Steele said she gets daily social media attacks as a woman on the federal election campaign trail. In one recent experience, which happened in person, she said she was left feeling extremely rattled.

“You have immediate concerns for your safety, and you are put off your game momentarily,” Ms Steele said. “But then you have to pick yourself up, dust yourself off, and remember that if you don’t do this, none of that will ever change. It can become quite the motivator.”

Ms Banks said there needs to be better leadership in federal parliament.

“What we saw in 2021 out of our parliament was not zero tolerance of that behaviour, we saw zero accountability,” she said.

Ms Banks also finds it concerning the media are not regulated for their use of sexist language.

“When I ran as an Independent, there was a headline that people like Zali Steggall, Kerryn Phelps and I were ‘Labor mutton dressed as Liberal lamb’. It’s extraordinary that that’s allowable in this country,” she said. “Freedom of the press sure but why … would women submit to taking defamation action and why should we have to? Why is that language allowed in headlines about women?”

“It’s not even embraced in a code of conduct,” she said.

Dr Faruqi said women of colour face the extra challenge of not being considered for pathways into politics or being preselected for key winnable seats, and the media often treats them as second rate.

“Part of my role for the last seven years since I’ve been in politics is to provide platforms for young women of colour and for First Nations women and I think it is our responsibility, people like me, who may have been firsts in some ways, to do that so that more of us can be there,” she said.

Ms Steele and Ms Banks agreed that female quotas in parliament would make a difference to equal representation.

“Until we get 50/50 women and men in our Federal parliament, we’re not going to make the progress that we need to make,” Ms Banks said. “We’ve seen the success of the Labor party’s quota program. Until the Liberals get out of their paradigm and implement a quota system in this country, we will never have equal representation of men and women in our parliament.”

Step up and step aside

"As a general society, we can’t continue to put this burden on women. We need men in power to step up. Let’s face it, most of the people who are in positional power in this country are men and we need them to step up,” she said.

Dr Faruqi said a big part of allyship is moving aside to make room for women and people of colour.

“I for one, am just sick and tired of chipping away at (change). We’re going backwards so we have to make some big bold steps,” she said.

“I want the walls to break down. Enough is enough, and I feel that it’s quite palpable that sentiment in society.”

“It is about telling it like it is. I don’t care if people feel threatened. You have to deal with it. How long will we go on being sidelined and oppressed and bypassed?”

Julia Banks is an author, businesswoman, lawyer and keynote speaker who runs her own consultancy business and holds several non-executive advisory positions. She has extensive experience in the corporate and legal sector and served as a Federal Member of the Parliament of Australia.

Dr Mehreen Faruqi is the Greens Senator for NSW and Spokesperson for Anti-racism, Education, Housing, Industry, International Aid, and Animal Welfare. She is a civil and environmental engineer and a life-long activist for social and environmental justice.

Georgia Steele is a lawyer, and now independent candidate running for the House of Representatives in the Federal seat of Hughes. In her former professional life, she practised as a corporate and commercial litigator at Allens and Freshfields, for 15 years, across four continents, and then for a major Australian retail bank.

Prof. Rosalind Dixon at UNSW Law & Justice and Director of the Gilbert + Tobin Centre of Public Law is a graduate of UNSW and Harvard. She has taught at law schools around the world – including Harvard, Columbia, University of Chicago and National University Singapore, and is the author of a new book, with Richard Holden, From Free to Fair Markets: Liberalism after COVID out later this year. She is passionate about law and politics, and currently Director of the Pathways to Politics for Women Program at UNSW.

Listen to the podcast of the ‘Vote for Women’ panel.