The two former Sydney Swans swapped footy guernseys for mortarboard hats this week as they celebrated their graduation from UNSW. 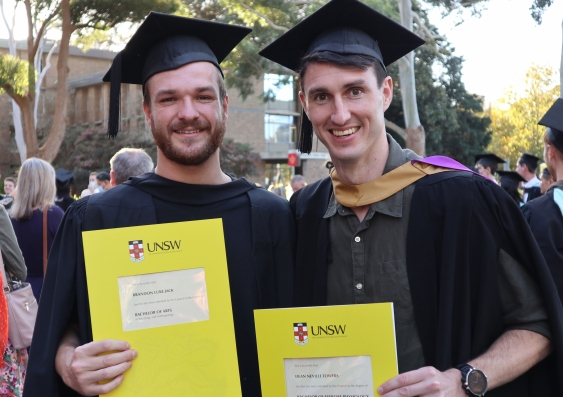 We see them out on the fields, courts and swimming pools of Australia every week – but when our star athletes fade from view, where does life take them next?

Though some athletes remain visible in coaching and commentary roles, the reality is that these opportunities are limited and most often to go to big name players, who spend over a decade at the top of their sport.

The average professional sporting career lasts just three years and while every athlete hopes they will be in that top echelon who can make a lifelong career out of sport, it pays to plan for a future away from the field.

Both were delisted from the Swans – Jack in 2017 and Towers in 2018 – before they would have hoped to see their football careers end.

However, they found a lifeline at UNSW, playing for the UNSW-Eastern Suburbs Bulldogs, where Towers is the captain-coach of the Men’s Premier Division team and Jack one of his key players.

The two football players graduated from their degrees this week, with Towers already enjoying his new career as an exercise physiologist.

“I feel like the uni has really prepared me quite well to step straight into the role that I'm trained to do and make an impact straightaway,” he said.

“The credit goes to all the great staff that the University employs, because their passion for teaching their subjects and passing on their experiences in the field that I'm going into has really helped me develop into the ready-made EP that I am.”

Although he considered other universities before choosing UNSW, Towers said the decision was quite straightforward.

“UNSW were just miles ahead and miles more organised than any other uni that I visited in New South Wales,” he said.

“They just made it so easy to transition from football into uni life and the support from Helen Bryson (UNSW Elite Athlete Program Manager) and the team at UNSW was just so great.

“It was a very easy decision – I can't believe I've wasted my time considering anywhere else.” 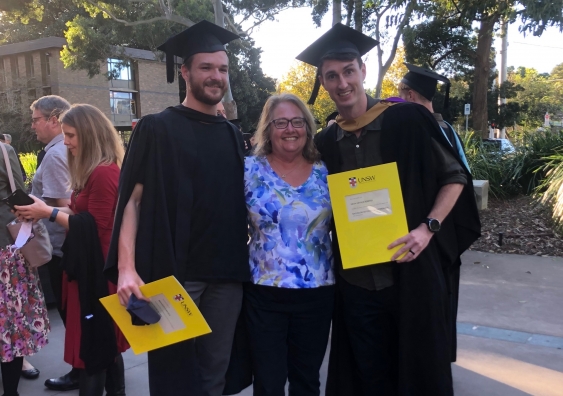 Jack’s trajectory was a little different – he entered UNSW straight from high school on an academic scholarship but altered his workload to fit around football and changed courses a number of times over the years, graduating this week with a Bachelor of Arts.

“It's just a great campus, I always felt like all the lecturers and tutors were approachable.

“I went part time over eight years and I always enjoyed coming in on my day off or having an hour in here for a tute – it was a nice escape for me from football.”

Jack’s Arts degree has also proved fruitful already – in 2021 he published his first book 28, which is a memoir of his life in football and beyond.

“I did my first my first bout of creative writing at this uni and some of the courses I did here really aligned to (my book),” he said.

“I did some nonfiction writing courses about writing memoirs and those were pretty influential in shaping what I ended up writing. I wouldn't have the book that I wrote without this uni.”

While the two teammates are forging very different career paths, they remain the firmest of friends – their bonds cemented through experiences in football and study.

Towers has a clear idea of where he wants to take his career in the future.

“At the moment, I'm working in private practice and I think if I continue down this path, it'll be as a business owner, taking on new EPs to teach them and help them develop their craft while trying to run a successful business.

“But there are so many different pathways that are opening up for EPs - it's a really exciting career.

Jack too has an idea of what his future holds.

“I'll write the books that people read in Dean's waiting room,” he said.

“More books, more writing – every couple of years I’ll hopefully have a book out.”

It is unsurprising that these two high achievers have ambitious goals and the determination and resilience they have built throughout their football careers and university studies will provide them with every chance at success.