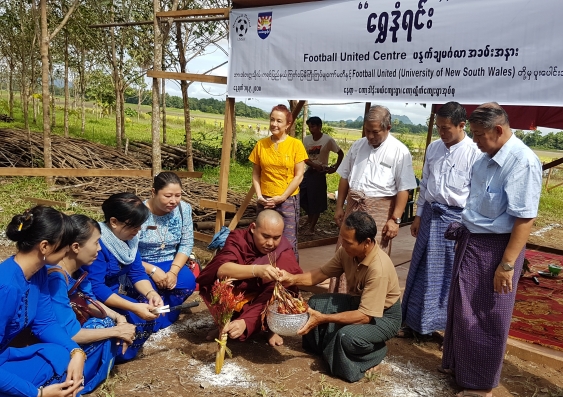 Ceremony to mark the breaking of ground at the new Football United facility in Hpa-An, Myanmar

UNSW Football United have broken ground on a new sports and community centre designed to help bring peace and social cohesion in Myanmar.

Football United, an initiative out of UNSW’s School of Public Health and Community Medicine, is a sport-for-social-change program that was founded in 2006 and has been running in Myanmar since 2013.

Now, thanks to an initial grant from the UEFA Foundation – set up by European football’s governing body – Football United are building a permanent facility in Hpa-An to develop and widen the reach of their activities.

The groundbreaking ceremony heralds the start of the process to construct a football pitch and hostel that will accommodate people attending residential courses at the site, with a second hostel and main meeting hall and office building to follow once further funding has been secured.

Dr Anne Bunde-Birouste, the founder of Football United at UNSW, said: “A seed grant from UNSW in 2013 helped us to start this ‘football for social inclusion’ work in different Myanmar universities – the same as we’ve done in Australia. We have been self-funding the program since.

“Then last year we got funding from the UEFA Foundation to set up a community centre which will focus on peace building through football and related activities. The football brings the whole community together and from there we are able to offer all sorts of different opportunities – various training, some social enterprise to address poverty, as well as English language teaching.” 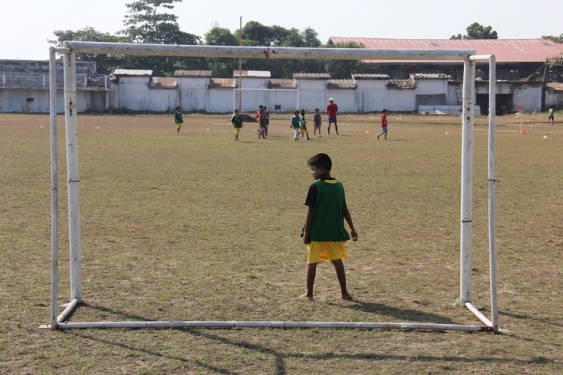 Since gaining independence from the United Kingdom in 1948, Myanmar has been ravaged by civil war and conflict among the large number of different ethnic groups across the country.

Kayin (formerly Karen) State, where the new Football United centre is being built, declared war on central government to defend their independent status as soon as national independence was granted. The 67-year conflict only came to an end in 2015 when a nationwide ceasefire between a number of different factions was agreed.

Football United hope their facility – which is due to open officially on January 7 – will help to build a continued peace, assist with reconciliation in the community and provide a vital social cohesion program.

Dr Tun Aung Shwe, who was born and raised in Myanmar, is a UNSW PhD candidate who has led the program’s development in his homeland.

He said: “There are four different villages around the centre, so we will bring the local community of about 2,000 people together – but it is designed to serve the whole Kayin State and ultimately the whole country.

“Once the centre is fully built, we would be able to invite anyone from across Myanmar to bring a group to stay here for a few days and be involved in the football-for-peacebuilding program.” 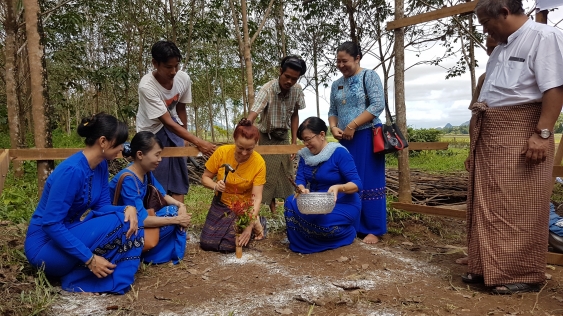 Dr Anne Bunde-Birouste (in yellow), founder and CEO of Football United, helps to break ground for a new permanent facility in Hpa-An, Myanmar

Football United are confident the new centre will be a big success and are hopeful that additional funding will soon be secured to complete the building work.

“We’ve designed it so it’s all modifiable, so the early structure will be able to have some meeting space as well as lodging. And then as we grow, we reorientate that until we get to the final set-up,” Dr Bunde-Birouste explained.

“We are looking for A$120,000 to fund the completion of stages 2 and 3 of the project, but we are very encouraged and we’ve already seen the positive power these programs can have. One of our great successes already is that former conflicting factions are working all together on this project.”

Anybody wishing to donate money to the Football United project in Myanmar can click here.