Pat Anderson has been honoured for her advocacy of social justice and lasting change for Australia’s First Peoples. 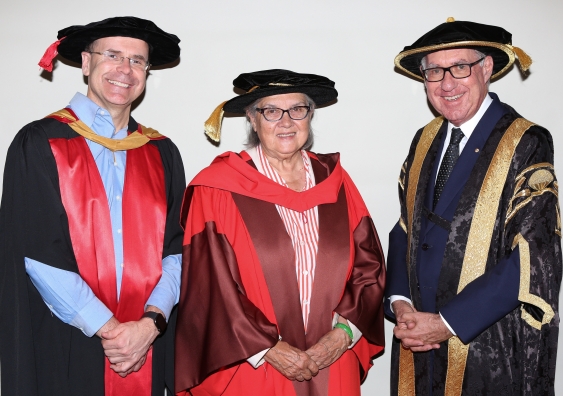 Aboriginal health and education champion Pat Anderson AO has been awarded an honorary UNSW Law doctorate in recognition of her lifetime campaign for social justice.

Ms Anderson, an Alyawarre woman who grew up in Parap Camp in Darwin, is honoured for her eminent service and long-standing dedication to advocacy for Australia’s First Peoples.

With a focus on education, health, early childhood development and violence against women and children, Ms Anderson has worked extensively across all levels of advocacy including community development, policy formation and research ethics.

George Williams, Dean of Law at UNSW, said: “Pat Anderson is a visionary leader and activist for social justice and constitutional reform.

“She is an exemplary role model for young Australians and a woman with a deep and abiding commitment to creating lasting change for Australia’s First Peoples.” 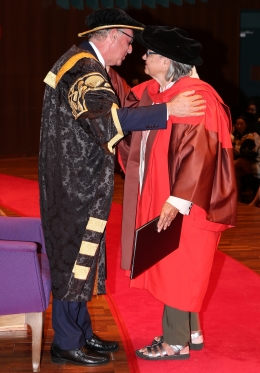 UNSW Chancellor David Gonski with Pat Anderson at the ceremony.

Ms Anderson, who was appointed an Officer of the Order of Australia in 2014 for distinguished service to the Indigenous community as a social justice advocate, was a legal secretary to the Woodward Royal Commission into Aboriginal Land Rights in 1973.

She then became one of the first Aboriginal women to graduate from the University of Western Australia when she was awarded a Bachelor of Arts (Literature) in 1980.

Ms Anderson began her career as an education advocate for Aboriginal children in Victoria and Tasmania and later played a significant role in a number of important Aboriginal health organisations.

In 1997, Ms Anderson led the founding of the Cooperative Research Centre for Aboriginal and Tropical Health, a predecessor organisation to the Lowitja Institute. In 2007, in recognition of her notable achievements, Ms Anderson was awarded the Public Health Association of Australia’s Sidney Sax Public Health Medal.

Ms Anderson was appointed co-chair to the Prime Minister’s Referendum Council in 2016, a landmark body formed to report to the federal government on the desires of Australia’s First Peoples in constitutional recognition.

A visionary leader throughout the process, together with UNSW Pro Vice-Chancellor Megan Davis and lawyer Noel Pearson, Ms Anderson played a pivotal role in 13 regional dialogues that culminated in the First Nations National Convention at Uluru in 2017.

Here, Ms Anderson led the creation of the 'Uluru Statement from the Heart', an inspired proclamation from Australia’s First Peoples that called for a constitutionally mandated First Nations voice to parliament together with a Makarrata Commission, a treaty to supervise a process of conflict resolution, peacemaking and justice between government and First Nations.