The Grand Challenge on Inequality has hit the ground running, with a student-led hackathon, a giant book club and a range of events locked in for 2017. 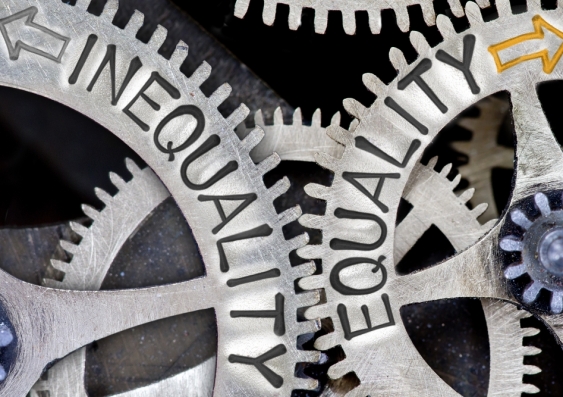 “Inequality poses a fundamental threat to humanity,” UNSW President and Vice-Chancellor Professor Ian Jacobs declared as he launched the third of the University’s Grand Challenges.

Despite equality being enshrined in national and international laws, real inequality existed and the problem was growing worse, Professor Jacobs said.  “The challenge is becoming greater and it demands urgent solutions, and that’s what our Grand Challenge is about.”

Led by Professors Richard Holden and Rosalind Dixon, Inequality joins the Grand Challenges on Climate Change and Refugees and Migrants, some of the world’s most pressing issues.

Dixon told the launch that the Grand Challenge program was about “curating and bringing together the ideas and the work being done by people on campus … it’s about building a community and making connections and increasing the visibility and policy orientation of existing work”.

The student-led hackathon, hosted by the Michael Crouch Innovation Centre, resulted in the development of ideas for apps including ethical reward systems that crossed over inequality, sustainable development and climate change; connecting refugees with volunteers from the community; and electronic notification of Indigenous detentions.

In a wide-ranging discussion, the panellists ruminated on the idea of offering stock options to workers so they could share in a company’s wealth; the urgent need for tax reform (especially around superannuation and capital gains); the impact of housing affordability on inequality in Australia and the merits of limiting negative gearing to new properties; the impact on policy of a 24-hour news cycle (politicians are forced to respond quickly and have less thinking time); how lengthening the school year could arrest the decline in numeracy and literacy; and why the benefits of free trade and openness on migration need to be made clearer.

As for future events, on 8 March, the Grand Challenge on Inequality and Workplace Diversity at UNSW will co-host the International Women’s Day breakfast on the Library Lawn, highlighting the ground-breaking research and initiatives led by UNSW staff and students that are driving change for women.

Other events slated for this year include a Sydney Writers’ Festival event in May, a Constitutions, Human Rights and Economic Inequality Conference in August and an exploration of urbanisation and its effect on inequality.

Holden and Dixon welcome suggestions from alumni, staff and students.

For details on all Grand Challenges events go to grandchallenges.unsw.edu.au.