For the love of music

The Australia Ensemble@UNSW will this Saturday premiere 'Ten Suns Ablaze', a new work commissioned by subscriber Sean Buck in celebration of his 50th anniversary of moving to Australia. 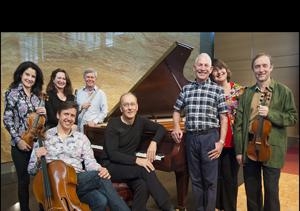 The Australia Ensemble will this Saturday premiere Ten Suns Ablaze, a new work commissioned by subscriber Sean Buck in celebration of his 50th anniversary of moving to Australia.

Buck donated $10,000 towards the new work, written by renowned Australian composer Maria Grenfell for the Ensemble, which is resident at UNSW.

Emigrating from South Africa in 1962, Buck says the donation is a way for him to mark this significant milestone.

“Music has wide appeal and it can live on in other places and times. I was looking for a way to celebrate the Australian people accepting me and giving me a good life, a better life than I would have had in South Africa.

“I also wanted to do something that could be shared and would give pleasure to others beyond a mere calendar date.”

While not a musician himself, Buck has developed a deep appreciation for classical music. As a teenager, he would listen to the late Dr A E Floyd and John Cargher on ABC Radio every Sunday evening.

“They were particularly influential in filling the gap of my musical knowledge. They didn’t preach – they would just make you think and listen.”

With assistance from the manager of the Australia Ensemble, Sonia Maddock, Buck chose Tasmanian-based composer Maria Grenfell to write the new piece.

“Sean gave us great freedom to choose someone as accomplished as Maria Grenfell to work with, and it is this kind of generosity that keeps the arts alive in Australia. Sean’s vision to celebrate his life in Australia through a new work for the Ensemble is a wonderful contribution to our country’s culture,” Maddock says.

Buck chose Grenfell because her scores “employ colourful musical idioms and adventurous instrumentation. Her music is exciting and joyful,” he explains.

Much of Grenfell’s inspiration comes from non-Western music and literature, and Ten Suns Ablaze draws its roots from a Chinese legend. Written for flute, clarinet, piano and string quartet, the score is celebratory in nature.

Music is central to Buck’s life – he has been an Ensemble subscriber for several years and travels extensively with his partner, continuously seeking out different orchestras.

“I’m very fortunate to have done so. But I have also realised that the quality of music is very high in Australia. We’ve got some wonderful musicians. My donation is a way of celebrating the people who make music for us, particularly for people like me who have no musical training.”

Ten Suns Ablaze premieres on Saturday, October 20 as part of the Ensemble’s annual subscription series. A free lunch-hour workshop with Maria Grenfell will be held on Thursday, October 18. For more information and tickets, visit the website.

Watch a video on the Australia Ensemble here.

New prize is music to the ears of choral composers