An initiative launched with UNSW Sydney will support the statecraft underpinning the AUKUS security pact. 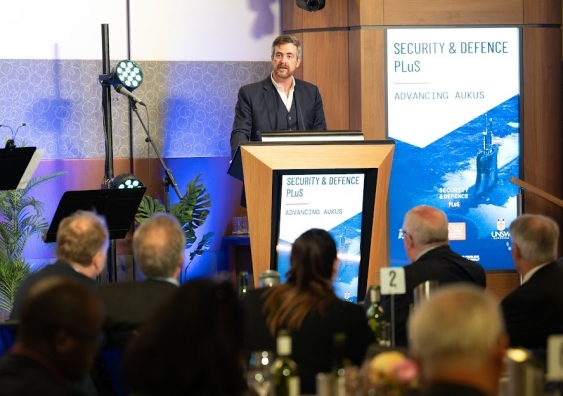 Professor Attila Brungs, Vice-Chancellor and President UNSW, at the 2022 Security and Defence PLuS conference. Photo: UNSW

The AUKUS security partnership was about far more than nuclear submarines and should promote and maintain long-term stability in the region, said the Director of a new initiative to support the development of the pact between Australia, the United Kingdom and the United States.

Professor Craig Stockings, UNSW Director of Security & Defence PLuS, said the purpose of the AUKUS partnership was peace and stability in a challenging geopolitical environment.

He made the statements during the launch of Security & Defence PLuS at the Advancing AUKUS Conference on November 14. Conference speakers included former minister for defence, Kim Beazley, and the former Australian ambassador to the US, Joe Hockey.

Security & Defence PLuS is a core initiative of the PLuS Alliance, a collaboration between Arizona State University, King’s College London, and UNSW Sydney that combines the expertise of the three leading defence research intensive universities with defence industry and government sectors to solve complex military challenges.

Security & Defence PLuS expands on that, with a focus on advancing and supporting statecraft, research and commercialisation of competitive advantage capabilities for AUKUS defence forces, and policy in the spirit of the AUKUS partnership.

Professor Stockings said that when the AUKUS agreement was announced last year, all headlines around the security partnership between focused on the delivery of nuclear-powered, conventionally-armed submarines to the Royal Australian Navy.

But AUKUS was about a great deal more than technology and weaponry.

“AUKUS is a group of like-minded countries interested in maintaining the status quo in the Indo Pacific area,” he said.

“The aim is to maintain peace.

“AUKUS is not about fighting. It's about deterrence and ensuring our way of life. Why are submarines necessary for that? They provide a deterrent to dissuade anyone from breaking the rules-based order.”

He acknowledged the threat from various geopolitical forces was real. AUKUS was a defensive reaction to those threats.

“There is nothing stopping nations peacefully coexisting within an arena of competition,” he said.

“It simply means we have to adjust our systems and thinking to accommodate that.”

The human factor in AUKUS

The PLuS Alliance, and Security & Defence PLuS, introduced a ‘human factor’ that Professor Stockings said was required in AUKUS.

“AUKUS is not a technological panacea,” he said.

“We sometimes view technology as a silver bullet. But a hypersonic missile is just a tool. What about the human dimension? I hope the Alliance will merge these streams – the human and the technological. They need to exist together.”

Rapid change and the need for AUKUS

AUKUS was “an expression of a strategic desire to speed up our response to threats from the autocratic capitals”, Vice Admiral Professor Maddison said.

“Decisions are being made now in Beijing and Moscow that are leading to some very difficult global challenges in this decade. 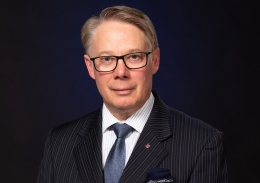 “In addition to the critical transfer of nuclear-powered submarine technology to Australia, AUKUS is about Australians, Americans and Brits ideating together, discovering new ways to seize operational advantage from seabed to space, rapidly progressing to deployable prototypes, and then working with industry and governments to scale up to commercialised capabilities for the warfighter.

“We need to identify and remove impediments to this process that are systemic, regulatory and cultural, in order to truly accelerate the change that all three nations need. This is not ‘business as usual’.”

Vice Admiral Professor Maddison said there was a strategic urgency around AUKUS that was being driven by “the pacing threat” – challenges presented to the post-World War II rules-based international order by China and other totalitarian states.

“The Russian invasion of Ukraine is a glaring example of the change,” Vice Admiral Professor Maddison said.

“Likewise, the extraordinary build-up of the People's Liberation Army and the abuse of international law in the South China Sea is a signal that change needs to happen quickly.”

Regional competitiveness would never go away, Professor Stockings said. But he saw AUKUS and the PLuS Alliance as a peaceful means of promoting and maintaining long-term stability in the region.

“While much good work has been done to date in Australia to bring academia, industry and the defence and policy community together to begin to frame answers to the questions that underpin the AUKUS initiative, the PLuS Alliance intends to go one step further, and to make AUKUS-related connections across all three nations,” he said.

It was this free flow of knowledge and expertise between nations, universities, industry and government that Professor Stockings saw as the solution to a significant global problem.

“The ideal for me is that in five years, AUKUS has brought about a stable balance of power in the Indo Pacific region,” he said.

“This stability is based on deterrence as well as peace, prosperity, economic exchange and learning to live with each other.”

Vice Admiral Professor Maddison said that through AUKUS, the three nations would develop capabilities that would be shared with their trusted partners and allies in the region. The core strength of Western democracies, he said, was their shared commitment to freedom and international law, and a determination to defend them together, if ever deterrence failed.

“AUKUS has the potential to shape collective opinion in the Indo Pacific region around the desire to sustain an open and rules-based international order,” Vice Admiral Professor Maddison said.

“It will also increase our deterrence capability to ensure our sovereignty and independence.

“Finally, I see AUKUS as a catalyst to ensure that if Australia must respond to a threat, we have a ready fighting force that can defend and secure our vital interests and then return home, while sustaining its ability to shape a better world for us all.”