Now the dust has settled on the Tokyo 2020 Olympics, some of UNSW’s Olympians reflect on the experience of the most unusual Games ever. 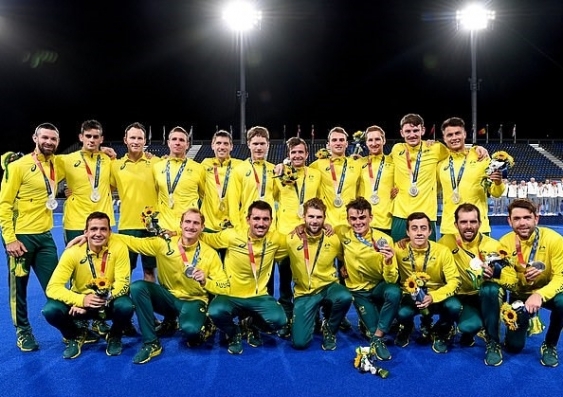 The silver medal provided a glimmer of hope to spur UNSW students Tim Brand (back row, far right) and Dylan Martin (back row, second from right) on to the Commonwealth Games in 2022 and the next Olympics in 2024. Photo: Hockey Australia

Despite the disappointments that have hit them during the Tokyo Games, Amy Ridge, Nathan Power and Dylan Martin are upbeat as they look to the future.

For Ridge and Power the disappointment has been particularly difficult to manage – as members of the Australian women’s and men’s water polo teams respectively, they had hoped to be flying out of Japan with medals around their necks.

Instead, the women’s team finished fifth and the men’s team were not able to progress past the preliminary rounds.

While both teams finished their campaigns with a win, it was nonetheless a hard pill to swallow after five years’ build up.

“I think the thing about the women's water polo at the Olympics is that there are a lot of teams that are really close in ability,” said Ridge.

“So that apart from the US, who were probably the most dominant team, between the next six teams, anyone could beat each other on any given day, which I think makes it a really exciting competition.

“Obviously we didn't achieve the goal that we set out to – we wanted to win a medal and we didn't.

“For us, coming in, we always knew it was going to be very tough challenge – we were drawn in our group of six with four European teams that are four of the best, including a team that went on to win it.

“It was quite difficult coming off no games for 18 months to then be facing some of these teams full of the best players of the last decade.

“Looking at my next three years, I still intend to keep on playing and represent Australia at the next Olympics in Paris.

“But as I'm now probably past the halfway point in my sporting career, and I'm closer to the end, I also have to start considering everything after sport.”

For Martin it was a different kind of disappointment – although he finished off the Olympics with a dramatic loss in a penalty shootout, he took home a silver medal.

While it was not an ideal result, the silver medal provided a glimmer of hope to spur the team on to the Commonwealth Games in 2022 and the next Olympics in 2024.

“We had enormous support from Australia, we were the fourth most watched moment at the Olympics, which is pretty huge,” said Martin.

“To lose like that and come so close is obviously pretty emotional and heartbreaking, but I think I'm still quite happy with a silver.”

All three agreed it was a strange Olympics to be part of – with life in the village significantly different to the way it would usually be.

However, there were certain comforts that made the experience much more bearable.

“I think the highlight of the experience was that the Australian team had a barista just for us,” said Ridge.

“That was pretty good, we spent a lot of time getting coffee downstairs.”

Martin and his teammates had their eyes firmly set on the food in the dining hall.

“The gyoza were so good – I think everyone ate them every day,” he said.

“After the final we all went into the dining hall and had a gyoza eating contest – we decided we were finally going to rip in and see how many we could eat!”

While it was tough not having family and friends cheering them on live, all the athletes felt the support from home.

On their return to Australia the celebrations with family were delayed even further while they completed their two weeks of hotel quarantine.

“We're pretty lucky because here (in Darwin) we get a veranda outside and we actually can see each other,” Ridge said.

“I think that's a huge positive rather than being stuck in a hotel room.

It’s been really helpful to be able to see my teammates, they're just across on the other side, and the fact that we're able to exercise and get fresh air has been good too.”

Back to the books

With this milestone event now completed, all three will turn their attention back to their studies at UNSW.

For Master of Commerce student Power, who has balanced elite sport and study for many years, this is a challenge he has faced throughout his career.

“It’s been quite tough because I've been overseas while I've been trying to study and to try and juggle both of those things while I’m in a time zone on the other side of the world, it is hard,” he said.

“But the fortunate thing is that we have the UNSW Elite Athlete Program and (Elite Athlete Manager) Helen Bryson, who has been able to foster an environment that’s very supportive of study and sport.”

While it was far from the Olympic experience every athlete dreams of, Tokyo 2020 was nevertheless unforgettable for those who competed.

For now UNSW’s student athletes return to their books and laptops in preparation for Term 3, before garnering the triumphs and disappointments of this Olympics to spur them on for Paris 2024.