The comedy star, who graduated from UNSW in 2009 with a double degree in law and arts, returned to campus to share her university experience and offer advice to students. 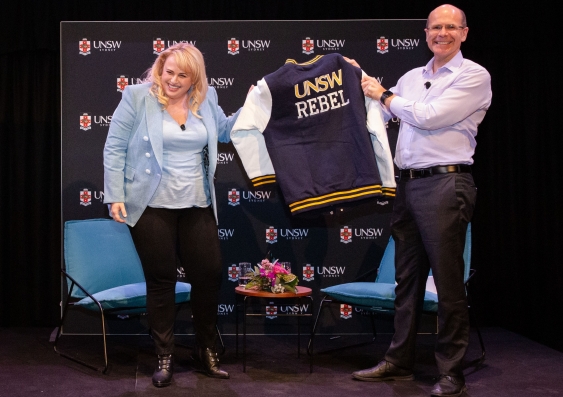 Hollywood actress, writer and producer Rebel Wilson returned to UNSW Sydney on Thursday to accept the Chancellor’s Award for Exceptional Alumni Achievement in front of an intimate audience in the Io Myers Studio.

Wilson is the second recipient of the Chancellor’s Award, which was established in 2018 to celebrate the exceptional achievements of a UNSW alumni with demonstrable success across a broad range of fields and interests. NSW Premier Gladys Berejiklian was the recipient of the inaugural award.

In May, in addition to Wilson, UNSW celebrated the achievements of 13 star alumni including pioneering medical and engineering minds, human rights advocates, stars of sport and film, leaders of urban innovation, as well as champions of diversity in business, art and STEM. At that time, professional commitments prevented the actress from attending the event in person, however, she accepted the award in a video message and acknowledged the recognition via social media.

Wilson made good on a promise to visit the campus when she returned to Australia, participating in a Q&A in front of an audience of about 120 students from UNSW Law and the Faculty of Arts and Social Sciences (FASS). During her conversation with UNSW Law Dean Professor George Williams AO, the star of Pitch Perfect and Bridesmaids candidly recalled her university days. 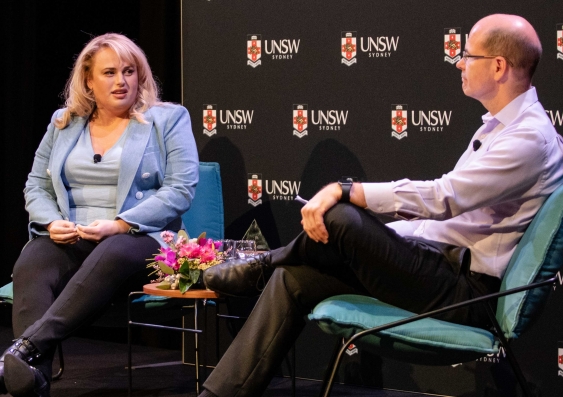 UNSW alumna Rebel Wilson visited campus on Thursday to accept the Chancellor’s Award for Exceptional Alumni Achievement. She sat down for a conversation with UNSW Law Dean Professor George Williams in front of an audience of about 120 students from the Faculties of Law and FASS.

Wilson reminisced about sleeping in class and commuting two-and-half-hours by bus from her family home in northwest Sydney. She described her affinity for wearing full Champion tracksuits to psych herself up before exams and intimidate her classmates.

Although she was an accomplished stage and television actress before she arrived at UNSW, Wilson said she was determined to complete her double degree in law and arts.

“People would say, ‘why are you still doing this? You’re on TV’,” Wilson said. “The television industry is very volatile, and you don’t know what’s going to happen. And I worked [really hard] in high school to get into the degree. I couldn't just waste that.”

Wilson has been an advocate for education, appearing on stage last year with Michelle Obama and Bradley Cooper to celebrate college-bound students at an event in the USA. On Thursday, Wilson reiterated the importance of education and encouraged students to “create a vision for what you want to do and go after it".

“If you are well-educated, you can have the most opportunity,” said Wilson. “Even though it was very difficult for me to finish my degree over a long period of time, it is good because in some ways you don’t know how it is going to come back and help you. But if you finish, it can be really invaluable.”

Since graduating in 2009, Wilson has established herself as one of Hollywood’s most sought-after entertainers. Still, Wilson has used her law degree on several occasions to negotiate contracts (she said the deal for Pitch Perfect 3 was “very good”), claim ownership of characters she has played on film and television and contract directly with a television network.

Most recently, she starred opposite Anne Hathaway in The Hustle, which the MPAA initially gave an “R” rating. Using her law degree, Wilson took the matter to arbitration and won, securing a “PG-13” rating, and making the film more accessible to a wider audience.

Georgina Couter, a third-year Commerce-Law student at UNSW said she appreciated hearing the struggles and successes of an accomplished alumna.

“I was really inspired, and it was great to hear from someone famous who you think is out of reach talk about how they went after their passion so well, especially someone who is from UNSW Law,” said Couter.

Wilson recently starred as the lead in Isn't It Romantic, which she produced under her production banner, Camp Sugar. Upcoming, she will star in Taika Waititi’s dark comedy, Jojo Rabbit, and in Tom Hooper’s big screen adaptation of Andrew Lloyd Webber’s acclaimed musical Cats, due in theatres in December. She is perhaps best known for her breakout scene-stealing role in the hit blockbuster comedy, Bridesmaids, and in the acclaimed Pitch Perfect film series.

Off screen, Wilson launched her own plus-sized clothing line, Rebel Wilson X Angels, and is a long-term supporter of the School of St. Jude in Tanzania, which fights poverty through education.