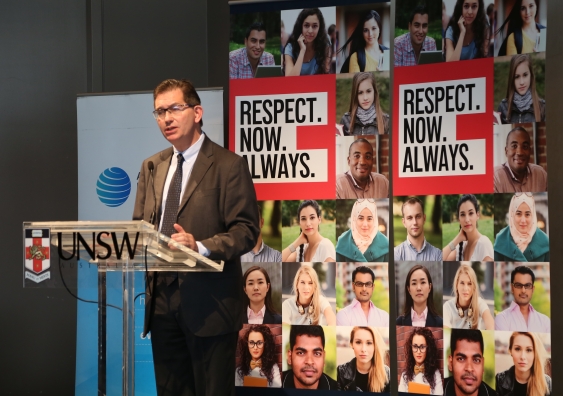 UNSW has hosted the national launch of a ground-breaking student survey on sexual harassment and sexual assault, the latest element of Universities Australia’s Respect. Now. Always. campaign. Starting in September, the survey will be sent out to 60,000 students – randomly chosen from Australia’s universities – to obtain data on the nature, extent and reporting of sexual assault and sexual harassment.

Amid wide media coverage, the Universities Australia (UA) lead Vice-Chancellor on Equity and Diversity, UNSW’s Professor Ian Jacobs, told the launch event that about 25% of all women were likely to experience sexual harassment or sexual violence in their lifetime. But he noted that a small survey last year by the National Union of Students indicated 75% of respondents had been sexually harassed, and 27% had been sexually assaulted while enrolled as a student. This included incidents on campuses as well as outside the university environment.

Today we say with one voice: One incident is one too many – Professor Barney Glover, UA Chair.

“The prevalence of sexual harassment and sexual assault is an issue that affects women, men, and members of the LGBTI community,” Professor Jacobs said. “It affects university staff, students and visitors and it’s perpetrated by staff, students and visitors both on and off campus. These are undeniable realities. We need to bring them out into the open, place them under the strongest spotlight, confront them, and develop effective strategies to tackle them.” And for that to happen, he said, more reliable data was essential. 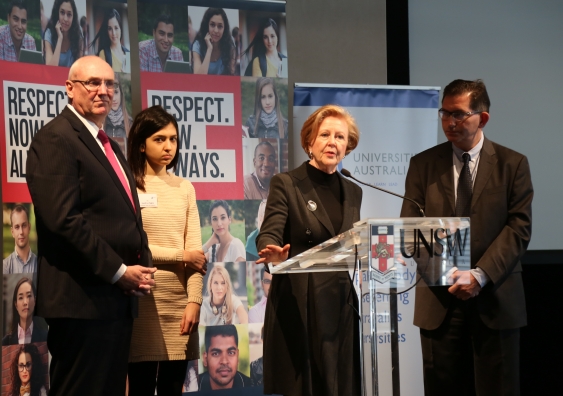 The survey, to be conducted by the Australian Human Rights Commission, will build on research done already by UNSW’s Australian Human Rights Centre led by Professor Andrea Durbach and will include input from experts with the Australian Bureau of Statistics and Roy Morgan Research. It is the first comprehensive survey of sexual assault and harassment experienced by university students undertaken in Australia, and is supported by the National Union of Students and the National Tertiary Education Union, and approved by the UNSW Ethics Committee. The submissions process will be open until late 2016.

“As we know, universities are complex environments,” Professor Jacobs said. “About three in five Australian university students are under 24, many are away from home for the first time, and there’s a vibrant social life on campus. We know too that 18- to 24-year-olds are the group most likely to drink harmful levels of alcohol on a single occasion. All these factors compound the issue of sexual harassment and sexual assault, but none excuse it.”

Professor Barney Glover, Vice-Chancellor of Western Sydney University and the current Chair of Universities Australia, said students expected universities to provide a first class education – and also a safe, secure environment to study in. “We know that the damage caused by sexual harassment and sexual assault cannot be undone. It reverberates throughout a lifetime.” He said even one incident was one too many.

We owe it to the many women who’ve had negative experiences in our universities and colleges to expose this behaviour and fight against it – Sinead Collee, NUS President.

President of the Australian Human Rights Commission, Emeritus Professor Gillian Triggs, said the Commission had been receiving reports for a very long time – sporadic, and from different institutions –about sexual assault and harassment. “They’re extremely distressing and they’re not just campus pranks. They’re appalling examples of sexist and demeaning attitudes to women – in particular women, but not always women – and we know that a culture of sexual discrimination goes hand in hand with a culture of accepting violence against women.”

Sinead Collee, President of the National Union of Students, said Australia’s universities needed to stamp out any form of culture that ultimately deprioritised women – both staff and students – and their experiences at university. “This is a difficult conversation but also an extremely necessary one. The survey will bring to light some of the darkest corners of our society, but we owe it to the many women who’ve had negative experiences in our universities and colleges to expose this behaviour and fight against it.” 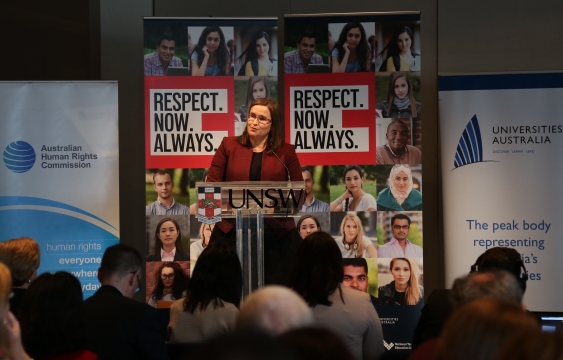 Australia’s Sex Discrimination Commissioner, Kate Jenkins, told the audience: “We hear about these challenges daily in our homes, our workplaces, our universities, on our sporting fields, in our schools. University education must be provided in a safe manner so that everyone can reach their full potential.”

In a message sent to the survey launch, Federal Minister for Education and Training Senator Simon Birmingham said sexual assaults and abuse had no place in Australian society. “Like all of you,” he added, “I’ve been disgusted by reports of such activity on some university campuses. Weeding that out is everyone’s responsibility and these surveys are a strong first step to ensure the right policies and practices are in place.”

Shadow Minister for Education and for Women Tanya Plibersek recalled her days as a women’s officer at the University of Technology Sydney, where she campaigned on sexual harassment and sexual assault. “I was stalked at university and when we had our sexual harassment campaign I got a phone call in the middle of the night threatening to rape me because of the sexual harassment campaign. And it breaks my heart that more hasn’t changed since then.” She said what had changed was the willingness of all of Australia’s universities to work together, and not turn a blind eye to the problem.

The survey aims to gather robust data on the nature, prevalence and reporting of sexual assault and sexual harassment; to find out more about responses to incidents in terms of support and complaint handling; to research current practice and best practice in dealing with and preventing sexual harassment and assault; and to gain inputs on how to improve current approaches and procedures. It will be anonymous and all data will be de-identified to ensure the confidentiality of participating students. In addition to the survey, any university student in Australia who wants to share information about experiences of sexual assault or sexual harassment will be able to make a confidential online submission to the Australian Human Rights Commission through its website. 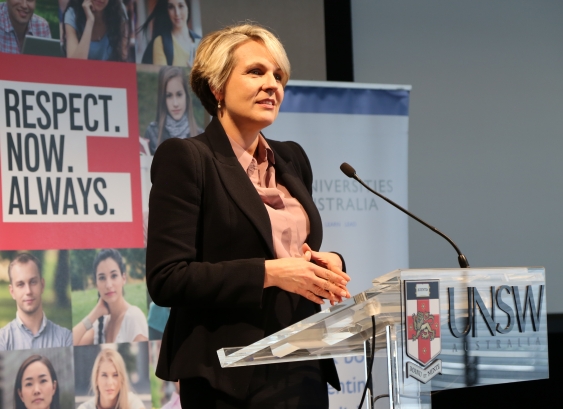 “I was stalked at university and ... got a phone call in the middle of the night threatening to rape me because of our sexual harassment campaign. And it breaks my heart that more hasn’t changed since then." Shadow Minister for Education and for Women Tanya Plibersek addresses the Respect. Now. Always. student survey launch. Photo: Steve Offner

Both Professor Glover and Professor Jacobs acknowledged the survey would turn up challenging data, but that was precisely why it was needed. “We’re determined to stamp out sexual harassment and sexual assaults on campuses,” Professor Jacobs said. “We’re exposing the problem, we’re talking about it, we’re shining a light on it. And that will be painful. But we’re giving people the opportunity to speak out.”

If you feel distress at any time during or after participating in this survey, support is available by calling 1800RESPECT.

The campaign has three key elements: raising awareness of sexual assault and sexual harassment and lifting the profile of support services for students; obtaining prevalence data to guide further improvements in policies and services; and assisting universities to share resources and best practice across the sector. #RespectNowAlways

Universities have zero tolerance for sexual assault and harassment on campus