Opinion As the Ukraine war drags on, how secure will Putin’s hold on power remain?

While some oligarchs have broken ranks with the Kremlin, there is no sign yet other elites are so discontented as to take action against Putin. 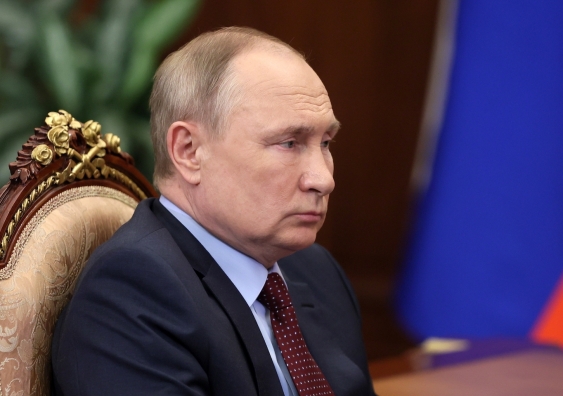 There has been constant speculation for most of Russian President Vladimir Putin’s 22 years in power as to what it would take to bring about his departure. Authoritarian leaders tend to depart according to two scenarios (beyond natural causes): forced out by the elite or by the street.

In light of events in Ukraine, has the time finally come that either of those scenarios might come to pass?

Putin appears to be isolated from advisers

It was generally accepted among Russian political experts that the really big decisions in Russia, such as whether to annex Crimea or invade Ukraine, were made by a small circle of advisers from the security services. These are people who also have close personal ties to Putin going back many years.

There is also a technocratic elite in Russia that has kept the economy and social services going under his supervision. And there is a group of rich businesspeople (the oligarchs and others), who in return for obsequiousness, were allowed to keep making money.

The first sign of a potential crack in Putin’s small circle of security advisers came at the meeting of the Russian Security Council on February 21, at which Putin extracted an agreement for Russia to recognise the breakaway Ukrainian regions of Luhansk and Donetsk as independent states. It was this decision that led to parliamentary approval of the use of Russian troops to “protect” those republics from Ukrainian aggression, which brought on the invasion.

The meeting revealed that the security chiefs who were considered Putin’s closest cronies were not in the loop. And many appeared uncomfortable and expressed, very carefully, their reservations. It took humiliating bullying to get them all onside.

It is unclear where Putin gets his advice from today, but a process of elimination suggests it might be just the military and the minister of defence, Sergey Shoigu. Seasoned observers have suggested even Shoigu looked shocked when Putin ordered him to place Russia’s nuclear forces on alert.

Some oligarchs distancing themselves

However, there is no sign these worried and humiliated members of the security elite are so discontented as to take action against Putin. And the technocratic elite claims to be loyally taking on the task of preparing the nation for crippling sanctions.

That leaves the economic elite. And here, there are signs of discontent, particularly the Yeltsin-era oligarchs, such as Oleg Deripaska and Roman Abramovich, who do not totally owe their wealth to Putin.

Deripaska, a billionaire who has been sanctioned by the West, has broken ranks with the Kremlin and called for the war to end, as has Mikhail Fridman, one of Russia’s richest men.

Abramovich, meanwhile, is selling the Chelsea football club he owns and setting up a foundation for victims of the war (although he has yet to condemn the war outright).

Such public challenges by oligarchs have been rare in Russia since ex-oil tycoon Mikhail Khodorkovsky was targeted by the Kremlin and spent years in prison on charges his lawyers maintain were trumped up.

Even if it’s starting to hit home for some oligarch that their businesses and wealth are under serious threat, there is not enough here to suggest a palace coup. It doesn’t help that the Russian president is directly elected, and can only be removed through impeachment, a drawn-out process that cannot be organised conspiratorially.

Nervous elites might get braver if there is enough tumult on the streets. What are the chances of popular protests bringing about Putin’s downfall?

Putin has always enjoyed high levels of popularity. He brought a style of open bluntness to the presidency that could be charming or brutal, depending on the circumstances. He was lucky with oil prices, which with some judicious economic management allowed him to preside over a dramatic improvement in people’s living standards.

Putin’s once-restrained but constant insistence that Russia was by right a great power and must be recognised as such did his popularity no harm. The annexation of Crimea in 2014 drove his poll ratings through the roof in an outpouring of patriotic fervour (peaking at 89% in June 2015, according to an independent pollster).

There’s been a decline ever since, as the economy stagnated, opposition leader Alexei Navalny was poisoned, and elections were manipulated. His rating dipped to 59% in mid-2020 and has hovered in the 60-70% range since then.

There have been people on the streets countless times over the years, but they have never been able to maintain momentum, fading away before policy brutality, arrests and imprisonment.

Thousands have already been arrested during street protests since the start of the Ukraine invasion. 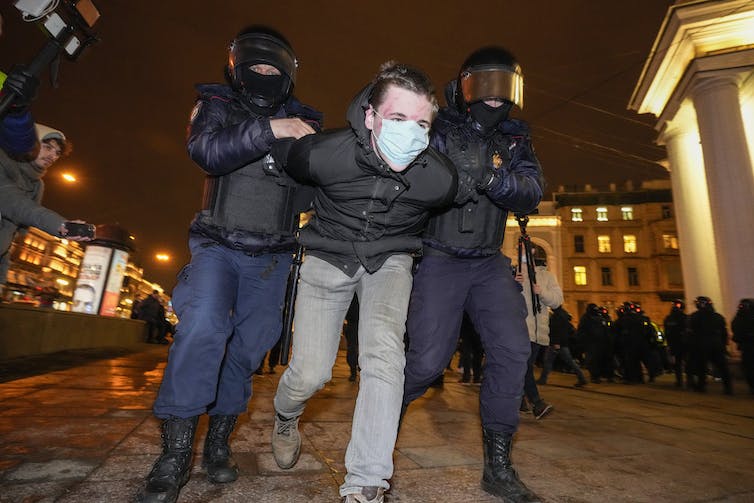 Police detain a demonstrator during a protest against Russia’s attack on Ukraine in St. Petersburg. Photo: Dmitri Lovetsky/AP

The mass in the middle

In what direction will things go this time? There are anti-war petitions garnering millions of signatures, and people continuing to gather on the streets, despite the risks. But prior to the invasion, polls showed an improvement in Putin’s rating to 71%.

Anecdotal evidence suggests a mass in the middle who don’t know what’s happening in Ukraine or choose to avoid knowing. For a political scientist, the issue is how to account for the apathetic middle when judging the survivability of a regime. Which side will they take when things get serious, given the fact Western sanctions are bringing about serious economic pain?

Those in the middle will put off taking sides for as long as possible. For many, the measure of serious economic pain is the severe hardships of the 1990s, which led many Russians to reject the Western model.

There is no reason to believe a new plumbing of the depths will produce a different response.