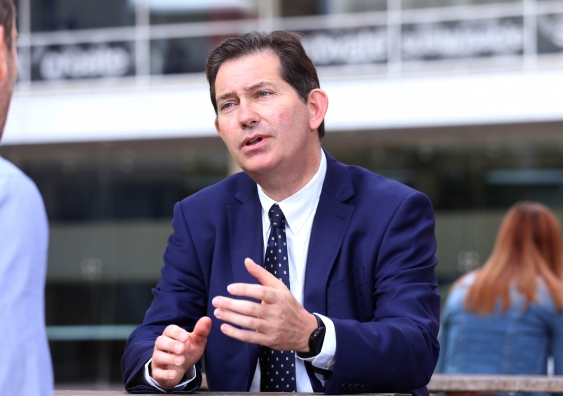 "We are just beginning to see the benefits of the energy, expertise and investment in the 2025 Strategy": UNSW Sydney President and Vice-Chancellor Professor Ian Jacobs.

OPINION: This year, vice-chancellors across the country came together to create the Universities Australia Respect.Now.Always. initiative. The intention of this unprecedented national campaign is to make our campuses as free as they possibly can be from sexual harassment and sexual assault. Where this problem exists, our university leaders want to know about it so that action can be taken to address it.

Our universities will not dismiss or deny this unpleasant truth and we are united in tackling and preventing sexual harassment and assault.

Universities Australia has worked with The Hunting Ground Australia Project team to facilitate campus screenings of the harrowing US film about sexual abuse on American campuses.

Coinciding with the screenings and campus-based forums, recent media reports have illuminated traumatic stories of our own. Our universities will not dismiss or deny this unpleasant truth and we are united in tackling and preventing sexual harassment and assault.

First, the Respect.Now.Always. initiative will raise awareness of this issue among students and staff and send a clear message about what is expected in their interactions with each other. By beginning to break any "codes of silence" that frustrate effective responses, the initiative is likely to empower people to report sexual harassment and assault, which we hope will also reduce the frequency of such behaviour.

Second, more detailed data on the extent of sexual assault and harassment in our universities will help us to understand the complex interplay of the attitudes and circumstances that empowers perpetrators and may discourage victims and bystanders from reporting or speaking out. To enable us to build a comprehensive national picture of the prevalence and nature of the problem, the Australian Human Rights Commission will conduct a national survey of university students.

The survey – based on research by UNSW's Australian Human Rights Centre and with input from Australian Bureau of Statistics experts – will ask students about their experience of sexual assault and harassment and the effectiveness of reporting procedures. The aim is to obtain robust information about the nature and scale of the problem to inform further action and development of best practice university policies and procedures. This type of survey, on this scale, has not been attempted before in Australia and universities have committed almost $1 million to support this important work.

Third, by providing clear guidance on what constitutes harassment or assault, how to report an incident and where to go for support, we hope to reduce any taboos around such reporting and send a clear message that such behaviour will not be tolerated. As we've put together the campaign resources, Universities Australia has sought feedback and input from respected expert organisations in the prevention of sexual violence including the National Sexual Assault, Domestic and Family Violence Counselling Service 1800 RESPECT and Our Watch. We want to keep working with students and student bodies as universities continue to develop a range of respect and safety initiatives including personal safety apps.

We can expect more disclosures of sexual harassment and assaults at Australian universities in the coming months, as this campaign encourages reporting and supports victims who speak up.

Universities are unique environments. We are a gathering place for very large numbers of young people, many of whom are away from home for the first time. In Australia, some 1.3 million students are studying at tertiary institutions, supported by around 100,000 staff. Three in five of our students are under 24, and many are in the 25-34 age group. The social life on and around our campuses is vibrant. We encourage it; building lifelong relationships is one of many advantages of studying with like-minded peers. However, there are many complex factors in play, not least of which is the reality that 18 to 24-year-olds are the most likely age group of Australians to drink to harmful levels of alcohol on a single occasion.

We can expect more disclosures of sexual harassment and assaults at Australian universities in the coming months, as this campaign encourages reporting and supports victims who speak up. We realise that this may play out negatively in the media – including at my own university – but we are determined to address the problem where it exists.

Australian universities are taking a leadership role in tackling this important issue. That is not only because we have a responsibility to our own large student populations. We also have a significant opportunity to drive broader social change and progress. Sexual harassment and assault is a serious national issue. Almost one in five Australian women and many men report experiencing some kind of sexual violence and half of all Australian women over 18 have been sexually harassed.

Our role as universities is to identify this behaviour and to play a determined role in changing attitudes that give rise to it. If we can help bring about a cultural shift among our 1.3 million students, there will be enormous benefits for Australian society as they go through their lives. We hope that the Respect.Now.Always. initiative will have an immediate impact and make a significant contribution to long-term change.

Professor Ian Jacobs is Universities Australia's lead Vice-Chancellor on Equity and Diversity and Vice-Chancellor of UNSW. A new website, UNSW Respect, has been launched to provide students with advice about reporting sexual harassment, sexual assault and rape.

If you need to talk to someone about sexual assault or sexual harassment, call 1800RESPECT.