For work on the legal issues affecting asylum seekers and research creating a green manufacturing revolution, Scientia Professors Jane McAdam and Veena Sahajwalla have been named among Australia's top 10 Women of Influence. 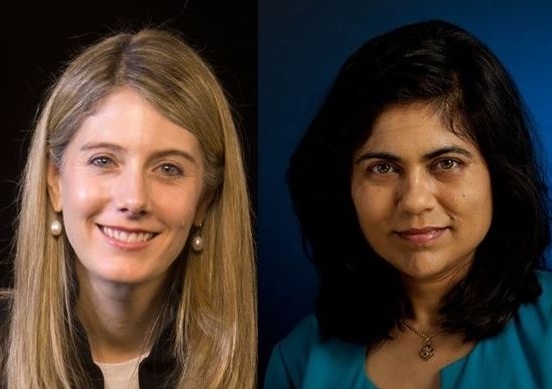 For work shaping international policies around displaced persons and research into transforming waste materials into valuable commercial products, UNSW Scientia Professors Jane McAdam and Veena Sahajwalla have been named winners in the 2015 Women of Influence Awards.

The women won their respective categories in the prestigious annual awards, sponsored by the Australian Financial Review and Westpac. They were selected from 100 finalists and more than 500 entrants at a gala event at Sydney’s Town Hall last night.

Professor Sahajwalla, Director of the Centre for Sustainable Materials Research and Technology at UNSW, was the winner of the innovation category, while Professor McAdam, a renowned international refugee law expert, won the global category. Both women were recently featured in the latest edition of Research@UNSW: 15 women changing our world.

"These awards draw out and showcase the diverse range of ideas that women have been developing across a number of disciplines, often as a result of some personal passion or motivation."

Professor Sahajwalla said she was thrilled to be recognised. “For me, what’s really important is that these awards draw out and showcase the diverse range of ideas that women have been developing across a number of disciplines, often as a result of some personal passion or motivation.

“It exemplifies the leadership of women in Australia, and opens your eyes to how much initiative is out there,” she says. “We need to tap into that initiative and use it to inspire the community at large to do more – both women and men.”

A materials scientist and Australian Laureate Fellow, Professor Sahajwalla is using previously unexplored high temperature reactions to transform some of the world’s most problematic waste materials into commercially viable products.

One example is her famous ‘green steel’ technology, which uses the carbon from discarded car and truck tyres to replace non-renewable coke in the steel-making process.

Now in commercial production around the world, the innovative technology has prevented more than two million waste rubber tyres from ending up in landfill – enough to reach the International Space Station if stacked on top of each other.

More recently, Professor Sahajwalla was named the leader of a new $8.8 million ARC green manufacturing research hub, which will connect academics with industry partners to develop new processes to re-route waste back into industrial production.

“If we are going to create social change, and a positive impact on our economy and environment, we need to think about long-term partnerships between the research community and industry. In this regard, UNSW is very well positioned. We have strong industry partnerships, ” Professor Sahajwalla said.

She said part of her success as an innovator could be attributed to working with "industry partners that are in it for the long haul” and “understand and love the science”.

One of the benefits of such partnerships is that they allow students to see the whole research journey from fundamental science to industrial application, Professor Sahajwalla said.

“Whenever students come on that journey with us, regardless of where they go off to work, they will always carry that passion for innovation. Seeing that is one of the best parts of my job.”

Professor McAdam, Director of the Andrew & Renata Kaldor Centre for International Refugee Law at UNSW, won the global category of the competition for her work investigating the legal issues that affect the fate of asylum seekers.

In 2013, the UN estimated that more than 51 million people around the world were forcibly displaced from their homes – the largest number of refugees since WWII.

An international leader in the field, she holds conjoint positions at the The Brookings Institution in the US and Oxford University’s Refugee Studies Centre, and has been an expert adviser to the UNHCR, the International Organisation for Migration, and the World Bank’s Thematic Working Group on Migration and Development.

The two winners were among six UNSW academics and four alumnae who were finalists in the awards.

Read about the full list of UNSW academics in the top 100 Women of Influence here.

Kristal Kinsela, a woman of influence in life and business