Tom Connor feared his rugby career was stalled on the sidelines before an opportunity arose to join the Australian sevens squad. 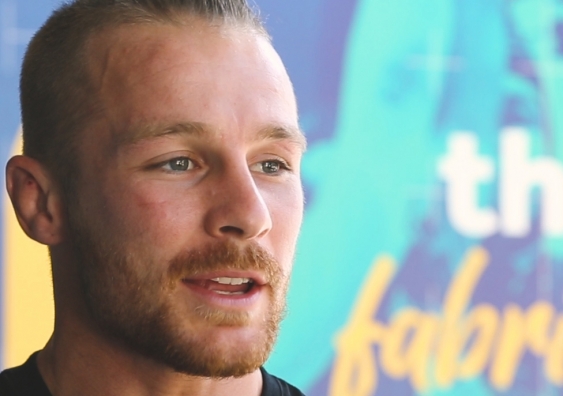 Tom Connor is going from success for Australia at the Sydney Sevens to pursuing a gold medal on the Gold Coast. Photo: supplied

UNSW alumnus Tom Connor could have been writing about the rugby sevens tournament at the 2018 Commonwealth Games – but instead he's in the Australian team and just five games away from winning a gold medal.

Connor, who completed a BA in Media, Culture and Technology at UNSW before completing a Master of Journalism, is eyeing up Commonwealth glory on the Gold Coast after being chosen for the international squad.

The 25-year-old backrower feared his promising rugby career had stalled at the end of 2017 until an injury to teammate Simon Kennewell opened the door and handed him his Australian debut ahead of the Sydney Sevens in January.

“I was lucky enough to do six months’ work after finishing university. That was at RUPA, the Rugby Union Players Association, and it meant I was writing about a lot of my friends,” Connor says.

“They were achieving their goals and I was getting frustrated that I hadn't hit mine. But luckily, I got the opportunity and took it with both hands, so journalism is on hold for the moment.”

Connor grabbed his big chance, helping Australia win the Sydney Sevens World Series tournament in January – featuring in every game along the way. He retained his place in the squad for the Hamilton and USA Sevens competitions, before being confirmed in the Commonwealth Games squad in mid-March.

Australia have finished second and third in the last two Games, so a medal is very much in Connor’s sights.

“It's really exciting,” he says. “We've got a tough pool with England and Samoa, but when we took out the Sydney tournament it gave us the belief that we can beat the best in the world.

“So, if we play as we know we can, then we've got a great chance of being on the podium – and we're planning on being right up top with gold.”

Connor’s rugby career began when he was five, before he progressed through the junior ranks at Shoalhaven on the NSW South Coast. He then moved to King’s School in Parramatta for his Year 11 and 12 studies and earned a call-up for the Australian Schoolboys team in 2010.

After taking up an elite scholarship to study at UNSW, Connor played 1st Grade for local club Randwick before moving to Warringah Rats on Sydney’s Northern Beaches.

“UNSW were really good in the support they provided me, choosing my timetables. If I was away for a competition they made sure I didn't fall behind,” he says.

“They gave me access to the gym and physio facilities, which would otherwise be really expensive. So, to have access to those facilities while still studying made a massive difference.

If we play as we know we can, then we've got a great chance of being on the podium - and we're planning on being right up top with gold.

“I had a few mates go to UNSW and I'd only heard good things. And it didn't take very long to know that I'd made the right choice.”

Connor helped Warringah win the NSW-based Shute Shield in 2017 and then stepped up another level by joining National Rugby Championship side, Sydney Rays.

“Winning the Shute Shield is something I never thought I would do,” he says. “Along with making my international debut, it's definitely in my top three achievements.”

UNSW wishes Connor and the rest of the Australian Rugby Sevens squad all the best in their bid for a medal at the Commonwealth Games, starting on Saturday 14 April with a pool game against Samoa in the Robina Stadium and hopefully culminating in the final on Sunday 15 April.

What’s your superpower? How to land a job in Silicon Valley