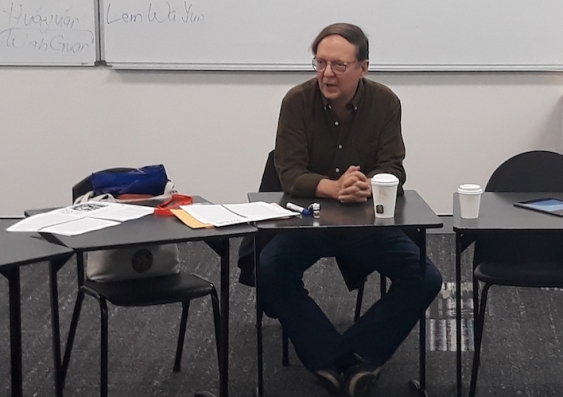 Professor von Kowallis was invited by a group of Year 11 literature students at St Andrew's Cathedral School, Sydney, to lecture on Lu Xun.

The Australian Academy of the Humanities has elected Jon Eugene von Kowallis, Professor of Chinese Studies in the School of Humanities and Languages at UNSW Arts, Architecture & Design. An Academy Fellowship is the highest honour for achievement in the humanities in Australia.

Professor von Kowallis has been recognised for his distinguished work in “Chinese language and literature, poetics, orientalism, cinema studies and translation”.

President of the Academy, Professor Lesley Head FASSA FAHA, said she was honoured to welcome the new Fellows.

“[They are] elected in recognition of their distinguished achievement in the humanities and arts disciplines and to Australian cultural life,” she said in a media release. “The broad-ranging research fields of the 22 elected Fellows demonstrate the richness and diversity of expertise in the humanities in Australia.”

Professor von Kowallis said it was a privilege to join the esteemed Academy.

“I am humbled by the honour and the congratulations I have received,” he said. “As one might say in Chinese: can kui, can kui 惭愧！惭愧！ (pronounced ‘tsan kway, tsan kway’).”

“My greatest honour has always been to work with my colleagues here in building Chinese Studies at UNSW. As I have always said: ‘Chinese Studies is for everyone’.”

Professor von Kowallis’s research, writing and publication on the role of classical-style Chinese poetry during the modern era have influenced the direction of an entire field on rethinking the role of traditional genres, both in articulating and in reflecting the modern era. His books, The Subtle Revolution: Poets of the ‘Old Schools’ in late Qing and early Republican China and Weimiao de Geming (微妙的革命) not only argue a thesis about the entry of modernity into Chinese lettres in the late 19th/early 20th century, but also challenge the dominant paradigm in Chinese literary history. His research in this field has been recognised as ground-breaking, both within and outside China.

Professor von Kowallis’s research continues in the direction of biographical, bibliographical and intellectual history, focused on Lu Xun but extending to Lu Xun's influence in Japan, and the relationship between post-War Japanese intellectual leader Takeuchi Yoshimi and contemporary Chinese intellectuals. He also has an interest in Taiwan ‘mainlander’ director Lai Shengchuan, now focusing on cross-Straits cultural diplomacy and soft power. He is a Fellow of the Royal Asiatic Society of Great Britain and Ireland, the Association for Asian Studies (USA) and current President of the Oriental Society of Australia.