Scientia Associate Professor Xiaojing Hao has been honoured at the Prime Minister’s Prizes for Science. 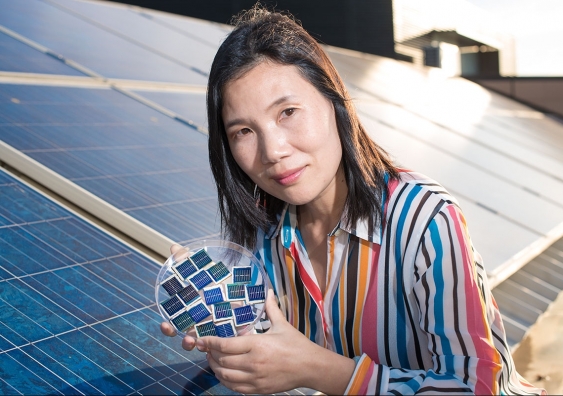 Scientia Associate Professor Xiaojing Hao has been recognised for her pioneering work in thin-film photovoltaics.

UNSW Scientia Associate Professor Xiaojing Hao has been named the winner of the Malcolm McIntosh Prize for Physical Scientist of the Year, one of three major awards at the 2020 Prime Minister’s Prizes for Science.

The prizes – Australia’s most prestigious awards for outstanding achievements in scientific research, research-based innovation and excellence in science teaching – were announced during an online event tonight.

A/Prof. Hao has been recognised for her work in thin-film photovoltaics, a field focused on the direct conversion of sunlight into electric power.

She said she was honoured to be recognised in the Prime Minister's Prizes for Science.

“This recognition is not only for my work, but for my group's work at UNSW. It is great to be able to put a spotlight on our research and promote our achievements,” she said.

Kesterite cells act much like the traditional silicon solar panels in widespread use today. However, they don’t use any of the toxic or scarce elements found in non-silicon thin-film solar offerings currently seen in commercial environments.

While silicon is an almost ideal material for solar photovoltaics, there is a need for similar environmentally friendly thin-film materials such as kesterite. These ‘green’ materials can be used in applications that are not well suited to silicon solar cells (e.g. coatings on buildings or on the bodywork of solar vehicles), or can be stacked on top of standard silicon cells to boost their power output.

'The purpose of my work is to squeeze more electricity out of sunlight.' – UNSW Scientia Associate Professor Xiaojing Hao

A/Prof. Hao’s work has been driven by her keen awareness that our current and future renewable energy demands will only be met with a wide-scale and significant increase in the use of photovoltaics. Her world-leading achievements have brought the performance of this environmentally friendly technology closer to being commercially viable.

“The purpose of my work is to squeeze more electricity out of sunlight, using thin-film solar cell technologies. One of my main desires is to create ‘green’ solar cells out of materials that are not scarce or toxic. This will reduce our greenhouse gas emissions and result in a better, cleaner life for us and our planet,” she said.

Over the past decade, Associate Professor Hao has emerged as a world leader in her field. She has set five world records for kesterite solar cell efficiency. In March 2017, her team achieved an energy conversion efficiency of 11 per cent, which was the first time that the 10 per cent efficiency threshold was broken for this type of solar cell.

UNSW Scientia Professor Martin Green, also known as the ‘Father of Photovoltaics’, said A/Prof. Hao has rapidly established herself as the international leader in the development of the environmentally friendly, thin-film solar cells.

“I am entirely confident she will be able to build on this outstanding start and, over the next five years, take these emerging photovoltaic technologies to a level where they will usher in a new generation of higher performance, lower cost cells than have been possible with silicon alone.”