The NSW Government’s decision to build a light rail line to UNSW is one of the most significant pieces of infrastructure supporting the University in its 60-plus years, says Vice-Chancellor Professor Fred Hilmer. 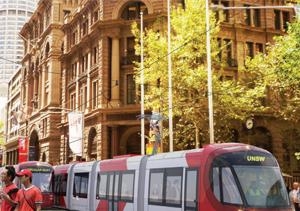 The University of New South Wales has welcomed the state government’s announcement that it will build a light rail line to UNSW.

The new mass transport system linking the Sydney CBD with Randwick via Central was announced today as part of the NSW Transport Master Plan.

“This is one of the most significant pieces of infrastructure supporting UNSW in its 60-plus years of operation,” Vice-Chancellor Professor Fred Hilmer said.

UNSW is currently the only university in Sydney without rail access despite its Kensington campus being the biggest in the state with more than 50,000 students and staff.

“This important decision opens access to UNSW and new opportunities for thousands of students from around Sydney, including the western suburbs, who have found the commute to campus just too difficult,” Professor Hilmer said.

“I congratulate the O’Farrell government for giving light rail the green light in its first term and I have no doubt it will be highly valued by all users.”

“With around two-thirds of the route able to be built on a dedicated corridor along Anzac Parade, we were always confident light rail was deliverable,” Professor Hilmer said.