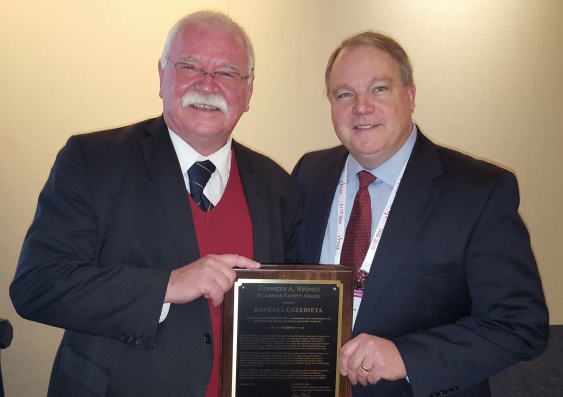 The annual award, presented by the US National Academies of Sciences, Engineering and Medicine’s Transportation Research Board’s (TRB’s) Roadside Safety Design Committee AFB20, is given to engineers and road safety experts who have dedicated their career to advancing transportation infrastructure and making roads safer.

Professor Grzebieta was recognised by the TRB’s AFB20 Committee for identifying the leading causes of roadside fatalities and injuries and developing mitigation techniques using full-scale crash testing and computer simulation.

As Emeritus Professor at UNSW Science’s School of Aviation and a Road Safety leader at the Transport and Road Safety (TARS) Research Centre at UNSW, Professor Grzebieta has spent 30 years conducting research into identifying the leading causes of accidents in almost all types of vehicles, conducted pedestrian safety reviews, cycling helmet safety and legislation, speed limit effects and impacts of roadside barrier safety.

“I am truly humbled by this award from the world’s leading authority on road infrastructure safety made up of the top professionals, experts and researchers in this field. Many people die and are seriously injured on our roads, not only in Australia but around the world. This award recognises the ongoing effort needed to move towards an error tolerant road transport system in Australia,” said Professor Grzebieta.

Commenting on roadside safety barriers, he said: “I have long advocated for installing nation-wide wire-rope barriers along with tactile line marking as one of the key changes Australia can make to dramatically reduce fatalities. When wire-rope barriers are installed with rumble strips on rural roads, there is an 80 to 90% reduction in fatalities and serious injuries. Sweden halved their fatalities when they installed these barrier systems in 2000.

“Victoria has now installed 1200km of wire-rope barriers on rural roads to reduce their rising fatality count in 2016. They just recorded their lowest ever road fatality count [in 2018],” said Professor Grzebieta. “Other states and in particular NSW are still lagging behind terribly. They are simply not investing the same scale of money to have a real effect on deaths and serious injuries.”

The barriers have been controversial with motorcyclists, based on misinformation about their safety for this road user group, Professor Grzebieta said.

He was instrumental in launching a $1 million project examining motorcycle impacts into roadside barriers and how motorcyclists could be better protected in collisions, particularly with W-beam barriers.

'The speed limits throughout Australia, in particular NSW, WA and NT, are much too high. In NSW, the limit on parts of the Newell highway are 110 kilometres per hour where there are no barriers installed. The speed should be reduced to the survivable limit of 80km/h unless median and roadside barriers have been installed.'

“We disproved all of the myths promulgated by motorcyclists, providing strong support for continued installation of these lifesaving barrier systems. Sweden saw a 40 to 60% reduction in motorcycle fatalities.”

“The National Heavy Vehicle Regulator allows heavy truck drivers to work up to 14 hours per day,” he said. “This is an exploitation of an industry that is putting Australian road users at high risk. The European Union only allows 9 hrs per day, with a maximum of 48 hrs per week. Long haul truck drivers can drive for 72 hours in a week in Australia, 84 hours in a week if they have done ’fatigue training’. If Australia is to reduce the number of heavy truck related fatalities the work hours must be reduce to world’s best practise European standards.”

“The speed limits throughout Australia, in particular NSW, WA and NT, are much too high. In NSW, the limit on parts of the Newell highway are 110 kilometres per hour where there are no barriers installed. The speed should be reduced to the survivable limit of 80km/h unless median and roadside barriers have been installed.

“Also the speed limit in residential streets, the CBD and high pedestrian active areas should be 40km/h, preferably 30km/h, in line with best practise European countries that have half the Australian fatality rates,” he said. “The Australian default speed limit for suburban roads is currently set at 50km/h.”

In a paper he co-wrote with his UNSW Sciences colleague Professor Jake Olivier, presented two weeks ago at the TRB’s annual meeting where Professor Grzebieta received his award, Professor Grzebieta said that the reduced speed limits he proposed were commonly used by countries such as Sweden, Netherlands and the UK, which had the world’s lowest road fatality rates.

Truck drivers on the road too long to stay safe