UNSW scientists will receive $18 million for research into early onset dementia and mood disorders, Federal Health Minister Tanya Plibersek announced during a visit to the University. 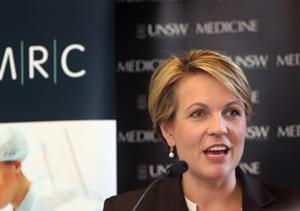 Research into early onset dementia and efforts to develop treatments for depression and bipolar disorder have been given a major boost, with UNSW researchers receiving more than $18 million in the latest round of federal government health funding.

UNSW’s Deputy Vice-Chancellor (Research), Professor Les Field, welcomed the UNSW funding as recognition of the importance of the University’s research in the key areas of dementia and mood disorders.

“This is a great result, rounding out a year of outstanding NHMRC grant outcomes for our health and medical researchers.  The program grants are directed towards areas of major research effort and these will build further critical mass in the area of Brain Science and Mental Health research at UNSW.”

One of the largest grants –  $11 million – was awarded to a team led by UNSW Professor Glenda Halliday, for investigations into frontotemporal and motor neurodegenerative syndromes, a common cause of dementia and motor neurone disease in people younger than 65.

Around 15,000 Australians are believed to be affected by the diseases, which are characterised by rapid disease progression. The grant will bring international leaders in clinical, pathological and biological research together to fast track innovations leading to more effective diagnosis, management and treatments.

"Degenerative disorders affecting the frontotemporal and motor regions of the brain mainly affect people in their prime. Those affected currently have few therapeutic options, and experience rapid progression of symptoms,” said Professor Halliday, whose team also includes Professors John Hodges and Matthew Kiernan, and is based at Neuroscience Research Australia.

"With this five-year program funding, we will make considerable advances in understanding the causes of these diseases and the mechanisms by which they progress.

"Our goal is to develop tools that allow us to distinguish between patients with different underlying pathological changes in the brain, and to test treatments that we hope will lessen the burden of these diseases on the community," she said.

UNSW’s second program grant – $7 million over five years – went to a team working to improve knowledge and management of depression and bipolar disorder.

Program leader Professor Philip Mitchell, who is based at UNSW’s School of Psychiatry and the Black Dog Institute, said better understanding of the mood disorders would lead to more effective personalised therapies.

“This is a very exciting time for research into depression and bipolar disorder. With the recent rapid advances in brain imaging and genetic technologies, we are on the brink of truly understanding the biological causes of these common and debilitating illnesses and the potential treatments,” Professor Mitchell said.