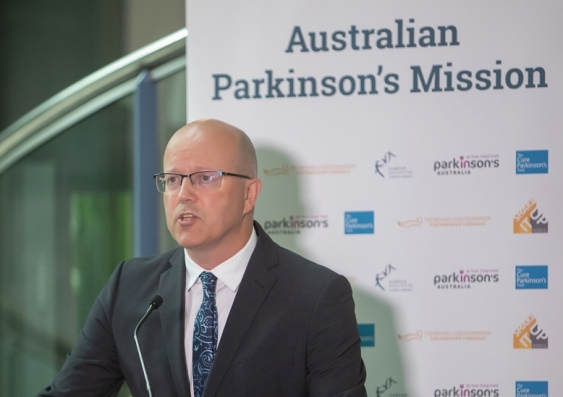 The funding, announced this week by federal Minister for Health, Greg Hunt, will enable the Australian Parkinson’s Mission to identify desperately needed disease-modifying drugs with the potential to slow the progression of Parkinson’s.

The Head of the Neurodegeneration and Neurogenomics Program at the Garvan Institute, UNSW Medicine Associate Professor Antony Cooper, said: “The Australian Parkinson’s Mission employs an entirely new design for Parkinson’s. The findings from our clinical trials will be integrated with analyses of patients’ genomic information and biomarkers – naturally occurring measurable indicators of a disease. This will help us identify the right drug for the right patient to halt this disease.”

The Mission is an Australian-led international collaboration, developed by the Garvan Institute of Medical Research, Shake It Up Australia Foundation, Parkinson’s Australia, The Cure Parkinson’s Trust and The Michael J. Fox Foundation for Parkinson’s Research.

CEO of Shake It Up Australia, Clyde Campbell, who was diagnosed with Parkinson’s in 2009, said: “This five-year program includes multiple clinical trials of potentially disease modifying drugs and treatments across Australia and will include many hundreds of patients. It’s going to have a substantial impact on identifying effective treatments and fast tracking them to people with the disease.”

Senior Vice-President, Research Programs at The Michael J. Fox Foundation for Parkinson’s Research, Dr Brian Fiske, said: “As a global leader in funding research and therapeutic development for Parkinson’s disease, we are thrilled that the Australian government is supporting this important mission. It has the potential to advance precision medicine and improve treatment for people with Parkinson’s worldwide.”

This personalised medicine mandate of the Mission will benefit from collaborations with two US-based researchers: Vikram (Vik) Khurana, MD, PhD, and Jian Peng, PhD. Khurana is the chief of the Division of Movement Disorders in the Department of Neurology and member of the Ann Romney Center for Neurologic Diseases at Brigham and Women’s Hospital. He is Principal Faculty within the Harvard Stem Cell Institute and Associate Member of the Broad Institute of Harvard and MIT. Peng is an Assistant Professor at the University of Illinois at Urbana-Champaign.

CEO of Parkinson’s Australia, Steve Sant said: “This represents the most significant investment in Parkinson’s research in Australian history. We applaud the government for their innovative and forward-thinking actions to support this Australian-led international effort.”

The Australian Parkinson’s Mission was made possible by early philanthropic support from Geoff and Dawn Dixon, David and Helen Baffsky, Dr Richard Balanson and Dawn Talbot and the Shake It Up Australia Foundation.

The mind’s eye – the key to controlling Parkinson’s hallucinations?

Selfies: Is your life worth a few 'likes'?