Surely it would be irresponsible to do anything but continue down the path of making cycling safer. Keeping helmets and building more cycleways is unquestionably the way to go, write Jake Olivier, Scott Walter and Raphael Grzebieta. 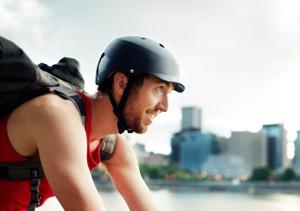 OPINION: We've heard loud voices calling recently for the repeal of the mandatory helmet law for cyclists, as well as calls to either remove existing cycling infrastructure or stop government spending on such programs, due to safety concerns. Both calls are unfounded.

Indeed, we can go further and confidently predict that if either step is taken, or both, our hospitals will soon see a large influx of injured cyclists and particularly those with serious head injuries.

Ask any trauma surgeon. Crash reconstructions show that when cyclists and cars collide, the head often strikes the bonnet or windshield - usually with debilitating consequences.

Those opposed to the helmet law cite personal liberty issues or say helmets aren't worth the bother. Both arguments are weak and easy to counter.

First, cycling has flourished since the helmet legislation was enacted in 1991. There is no sign of widespread grassroots ideological opposition to the law, any more than there is to mandatory helmets for motorcyclists or seatbelts in cars.

Cycling rates are rising rapidly and claims that repealing the law will encourage more cyclists are light on fact and heavy on opinion.

Second, there is solid evidence that cyclist head injuries have declined while other cyclist injuries have not during this period: that is, when accidents happen, helmets make an important difference. No one should need reminding that serious head injuries may exact a lifelong toll on the individual and be a great cost to the community.

Interestingly, our most recent study, published in the leading journal Accident Ana-lysis & Prevention, shows that increased spending on cycling infrastructure has now accelerated the decline in head injuries that followed mandatory helmet wearing.

It is worth examining this finding in a little more detail because it lays bare why opponents of bicycle infrastructure are on the wrong track.

Our research published last year established that bicycle-related head injuries fell by 29 per cent immediately following mandatory helmet legislation. That reduction was unrelated to any other changes occurring in cycling around that time: helmets plainly worked as intended.

We have since looked at subsequent New South Wales trends in bicycle-related injuries that were serious enough to require hospital admission – excluding emergency room visits and less severe injuries — between 1991 and 2010.

We then singled out head and arm injuries for comparison, to see whether helmets were doing their job. Arm injury rates reflect what is happening in the cycling environment, such as general safety improvements and the behaviour of cyclists. If more riders take to the roads, for example, or ride longer distances, more accidents resulting in arm injuries will follow. Helmets only protect heads, so comparing arm and head injury rates gives a clearer picture of the effect of helmet-wearing.

We found that arm injuries have indeed mirrored the large growth in cycling numbers in NSW and Australia in general. In the past decade in particular, imports of bicycles and cycling participation rates have grown and the average daily number of cyclists in the Sydney CBD has trebled.

Put another way, if head injuries had increased at the same rate as arm injuries, we would have expected 1,446 head injuries in 2010. Instead, there were only 706 – that's a lot of serious harm avoided in just one year.

Importantly, from 2006 onwards, we detected a second, even more heartening change in the trend – instead of cycling injuries continuing to increase, they actually began to fall, particularly head injuries. This change is unlikely to be related to helmet legislation alone. Indeed, the timing corresponds closely with more money being spent on cycling infrastructure, notably cycleways.

On a per population basis, 2010 enjoyed the lowest head-injury rate since the collection of hospitalisation data going back to 1988-89.

These results highlight the success of the Safe-System Approach. This national road safety strategy, adopted by all state and federal roads ministers, suggests that multiple interventions are needed to improve safety.

Bicycles are inherently unstable and cyclists will still crash on cycleways and in other off-road environments. In any cycling crash, wearing a helmet properly protects the most important part of the body. However, helmets alone should never be seen as a panacea. They are one important component in the overall cycling safety environment.

Surely it would be irresponsible to do anything but continue down the path of making cycling safer. Keeping helmets and building more cycleways is unquestionably the way to go.

Dr Jake Olivier is Senior Lecturer in the School of Mathematics and Statistics; Scott Walter is from the UNSW Centre for Health Systems and Safety Research; Professor Raphael Grzebieta holds the UNSW Chair of Road Safety.