Researchers from UNSW and Harvard have identified that replacing two naturally occurring molecules can reverse the ageing process of blood vessels in mice, boosting the animals' physical endurance. 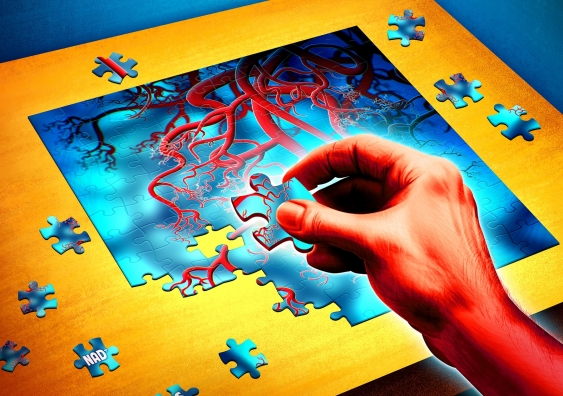 Researchers found that two molecules could replicate the benefits of exercise, a finding that could lead to better athletic performance and improved mobility in the elderly. Illustration: Kevin Krull.

Researchers from UNSW and Harvard Medical School have discovered that replacing two naturally occurring molecules in the body could reverse symptoms of ageing, potentially influencing how the body responds to and performs exercise.

In a ground-breaking paper published in Cell, researchers found that a decline in the blood flow to tissues and organs with age can be reversed by restoring molecules that improved exercise capacity and physical endurance in mice. The researchers found that the two molecules could replicate the benefits of exercise, a finding that could lead to better athletic performance, improved mobility in the elderly and the prevention of ageing-associated diseases like cardiac arrest, stroke, liver failure and dementia.

For the first time, the study showed that as levels of the metabolite NAD+ decline with age, the body’s capacity to exercise decreases because of fewer blood vessels and reduced blood flow. By treating mice with the NAD+ booster NMN and increasing levels of hydrogen sulphide, physical endurance was extended in mice by over 60%. This was the case in both young and old mice.

Senior author Dr David Sinclair, head of laboratories at Harvard Medical School Boston and Professor at UNSW School of Medical Sciences, says the study showed why the endothelial cells, the cells that line the blood vessels, are the main culprit in ageing and the likely reason we feel tired and have less energy as we age.

“We become weaker and less fit after 50, and eventually succumb to diseases of ageing,” says Dr Sinclair. “Remarkably, by feeding mice NMN and H2S it restores NAD+ levels in endothelial cells and makes them believe they are young and exercised.

“With exercise, the effect is even more dramatic. We saw 32-month-old mice, roughly equivalent to a 90-year-old human, receiving the combination of molecules for four weeks run, on average, twice as far as untreated mice. Mice treated only with NMN alone ran 1.6 times further than untreated mice.”

The scientists identified that this mechanism is due to a restoration of capillary formation in muscle by stimulating the activity of the protein SIRT1, a key regulator of blood vessel formation.

Lead author Dr Abhirup Das, from UNSW’s School of Medical Sciences and a visiting scientist at Harvard Medical School, emphasises the significant effect NMN and H2S could have on frailty, circulation and the capacity to run.

“H2S alone has some anti-ageing properties but the two combined have a synergistic relationship that helped mice to run at least 50-60% further,” says Dr Das.

If these findings translate from mouse to human, we could have a revolutionary impact on the quality of life of older people.

“Age plays a critical role in the links between blood vessels and muscle, and points to a loss of NAD+ and SIRT1 as the reason people lose the capacity to exercise as they age.

“It has significant impact on frailty because one of the main reasons for frailty is reduced blood flow that affects every part of our body. And reduced muscle function makes us weak. Our bodies already make NAD+ in our cells, but after 50 its levels drop dramatically. Exercise is a way to prevent decline in blood flow but these findings show that by restoring the levels of NAD+ in mice equivalent to 60-year-old humans, we can get the same benefits of exercise,” says Dr Das.

In a paper published in Science in 2017, Dr Sinclair identified that the metabolite NAD+, which is naturally present in every cell of our body, has a key role as a regulator in protein-to-protein interactions that control DNA repair. Treating old mice with NMN improved their cells’ ability to repair DNA.

Dr Sinclair and Dr Lindsay Wu, co-Head of the Laboratory for Ageing Research at UNSW, have been working for five years to make NAD+ boosters into therapeutic agents with their companies MetroBiotech NSW and MetroBiotech International.  Human trials with a NAD+ booster called MIB-626 were completed in Boston in 2017, with the second phase predicted to begin later this year.

The goal is to work towards developing NMN-based drugs that mimic the benefits of exercise – increasing blood flow and oxygenation of muscles.

“If these findings translate from mouse to human, we could have a revolutionary impact on the quality of life of older people,” says Dr Wu, “and not to mention the benefits of avoiding diseases of ageing.”

“This new study adds to the body of work showing that the restoration of NAD+ in mammals can delay and reverse many of the effects of ageing. NAD+ boosters, particularly when combined with H2S, are some of the most promising molecules in medical research today,” says Dr Sinclair.

This work was funded by a grant from the NHMRC of Australia to Dr Wu and Dr Sinclair.