A small patch allows people with diabetes to measure their blood glucose levels easily. But this technology isn't currently subsidised, so many everyday Australians who could benefit are missing out. 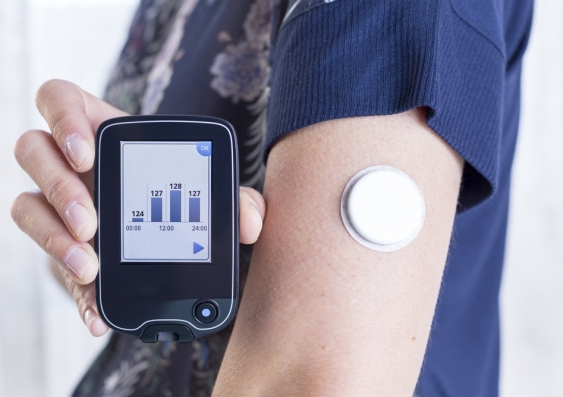 To obtain data from a glucose monitoring patch, a reader or compatible smartphone is simply scanned over the sensor for one second. Image from Shutterstock

Diabetes is the fastest growing chronic condition in Australia. At least 1.2 million Australians live with diabetes, and about 10% of them have type 1 diabetes.

Diabetes sees the body become resistant to the effects of insulin, or lose its ability to produce insulin from the pancreas. Insulin keeps the body’s blood glucose levels, or “blood sugar”, within a healthy range. Everyone with type 1 diabetes, and some people with type 2 diabetes, will need to self-administer regular insulin injections.

People with diabetes, particularly type 1, must continually monitor their blood glucose levels to manage their condition. Over the years, a number of different innovations have allowed people to do this.

The most traditional method is finger prick testing, which requires a person to prick their finger to draw a drop of blood. They test the blood on a strip that’s inserted into a blood glucose testing device, and must do this several times a day. This technique can be painful and disruptive.

But now we have a new and exciting tool that can help ease this burden for people living with type 1 diabetes. It’s called the flash glucose monitoring system.

Flash glucose monitoring was first introduced in Europe in 2014, and has been available in Australia since 2016.

This glucose monitoring system involves a small, water-resistant sensor applied to the back of the upper arm. The technology automatically measures and continuously stores tissue glucose levels 24 hours a day. The patch only needs to be changed once every two weeks.

To gain a reading, a reader or compatible smartphone is simply scanned over the sensor for one second. The reader or the smartphone then displays the current glucose reading, a glucose trend arrow (indicating whether a person’s blood sugar has gone up or down) and a chart showing glucose levels over the previous eight hours.

What are the benefits?

Flash glucose monitoring gives people living with diabetes a chance to see the full picture of their glucose levels that is not possible with traditional blood glucose test strips.

Patients also have the option to share their readings with their health-care providers, giving them deeper insights to make more informed treatment decisions.

One of the most beneficial things is that it is discreet and allows people living with diabetes to keep an active lifestyle while maintaining their blood glucose levels within safe ranges.

Global data suggests users of flash glucose monitoring check their glucose levels on average 12 times per day, which is considerably more than the number of finger prick tests most people are doing.

This technology needs to be more accessible

Outgoing British PM Theresa May has been seen wearing a flash glucose monitoring device. Closer to home, AFL footballer Paddy McCartin has brought awareness to diabetes by wearing his on the football field.

But attaining subsidised flash glucose monitoring devices remains a challenge for everyday Australians. People have to pay for it out of pocket, which adds up to approximately A$2,400 a year. 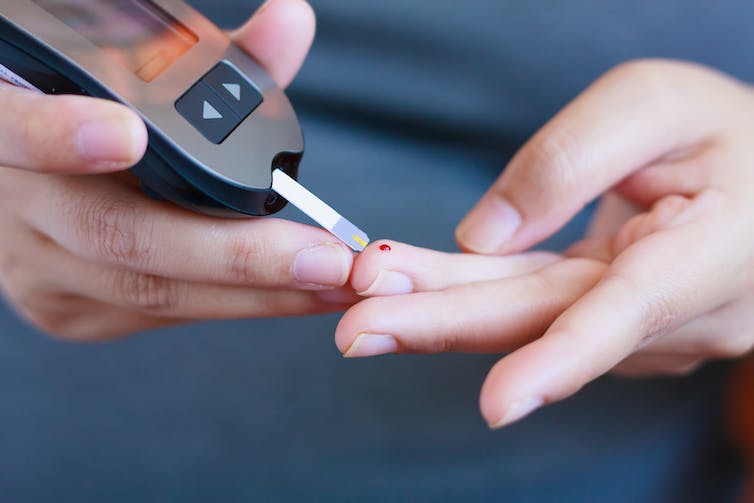 People with diabetes have traditionally needed to prick their fingers to measure their blood glucose levels. This is now changing. From shutterstock.com

And this cost is only a fraction of the financial burden a person with diabetes has to face. Other expenses can include maintaining their insulin pump, and appointments with endocrinologists, diabetes educators, optometrists, podiatrists, psychologists and general practitioners.

Flash glucose monitoring was supposed to be subsidised from March 1 2019 for select groups, such as people under 21, expectant mothers and breastfeeding women. But nothing has come of it. According to the Department of Health, this is due to ongoing price negotiations.

Funding flash glucose monitoring devices has been seen as a priority in other parts of the world. It’s currently subsidised in more than 30 countries, including Spain, Ireland and Greece.

Diabetes Australia supports the subsidy of this technology to make it more accessible for people with diabetes.

If patients don’t properly manage their diabetes, they risk heart disease, kidney failure, loss of vision and amputations. All of these complications require extensive health investments, but are avoidable with the right resources.

So subsidising a technology that’s going to help more people better manage their diabetes is worthwhile not just for the people that will see positive impacts in their day-to-day lives. This is an important investment on a broader scale.