UNSW medical students have committed to working in some of Australia’s most remote locations. For one, working in an Indigenous community has been a revelation. 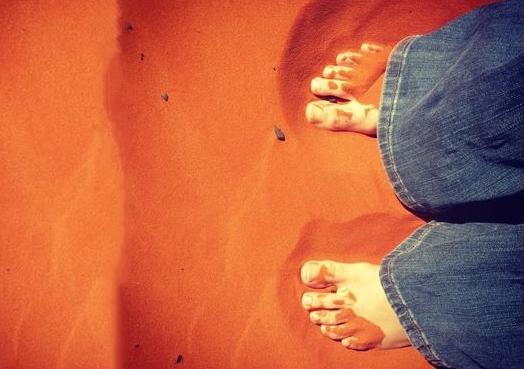 This is Anmatyerr country, and it’s unlike anywhere I have ever been. Photo: Amy Coopes

Blink and you’ll miss it. About 120 kilometres north-west of Alice Springs, a modest, green signpost indicates the turn-off for Napperby – a cattle station sprawling across some 5,700 square kilometres of Central Australia’s red sand desert.

It’s not always passable – just one day of rain can transform it into swirling rapids as I will soon discover – but 83 kilometres down the Napperby road, nestled in an undulating landscape of rocky hills, dunes and the ochre stalagmites of termite mounds, is an Aboriginal community called Laramba.

Living on country is humbling, overwhelming. It’s an assault on the senses.

This is Anmatyerr country, and it’s unlike anywhere I have ever been. For the next few years it will be a home of sorts: I’ll be doing medical placements in the clinic here as part of the John Flynn Placement Program (JFPP) managed by the Australian College of Rural and Remote Medicine.

I’m one of 98 UNSW students currently on the JFPP, a government scholarship for people interested in working at some of Australia’s most far-flung outposts. 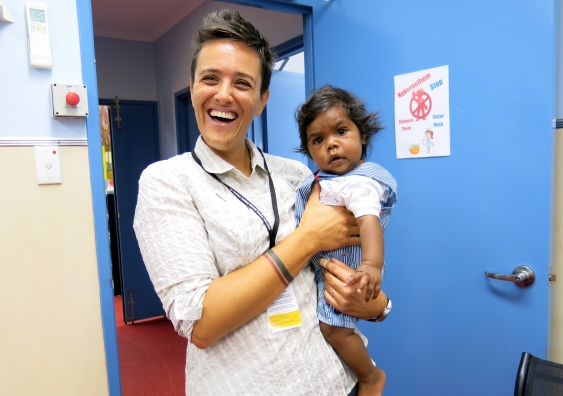 Amy Coopes with one of her younger patients.

Twelve of us have been assigned to the Northern Territory and one is even stationed with Australia’s Antarctic Division in Tasmania, with the option to travel to the icy continent for her final placement.

It may not be Casey Station, but Laramba certainly is remote.

Medical emergencies are flown to Alice Springs by the Royal Flying Doctor Service (RFDS). After dark, the airstrip – a cleared patch of red earth sporting a lone windsock – is not safe for the RFDS and we have to drive an hour or so down the rutted dirt road to Ti Tree, where planes can land at night.

The nearest doctor is 100 kilometres away, at Yuendumu, and the ambulance is a Toyota LandCruiser Troop Carrier with a stretcher in the back.

The kids are the best part of the job. Like clockwork, a riotous gaggle bursts through the clinic’s doors at 3pm every day, clamouring for their chewable vitamin C.

Blood tests are about as advanced as diagnostics get and the pathology run goes just twice a week – an esky full of blood and urine samples we drive out to load on to the bush bus into Alice, chancing flat tyres, floods and everything in between.

Aboriginal health gets top billing in the Australian medical curriculum. We are taught about cultural competence and safety, drilled on the statistics, and well versed in the chronic diseases endemic in the Indigenous population. But it isn’t until I arrive in Laramba that I realise how little – nothing – we actually know. 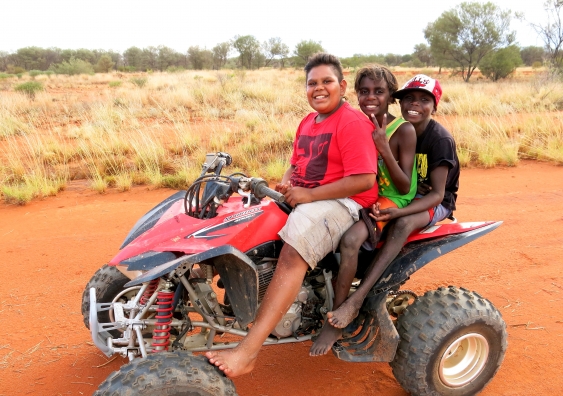 The best part of the job – the kids. Photo: Amy Coopes.

I am conferring with nurses over a patient one day when the Aboriginal health worker strides in, a supermarket chiller bag in hand.

“What should I do with this?” he asks, reaching into its depths.

All I see is reptilian tail, a metre of it, as I leap clear from my chair into the storeroom. Eventually a head emerges from the bag or, where the head should be, a VB can.

Using surgical scissors, we cut the goanna free and return him to the dry bed of Napperby Creek. Some lizards just can’t hold their drink. 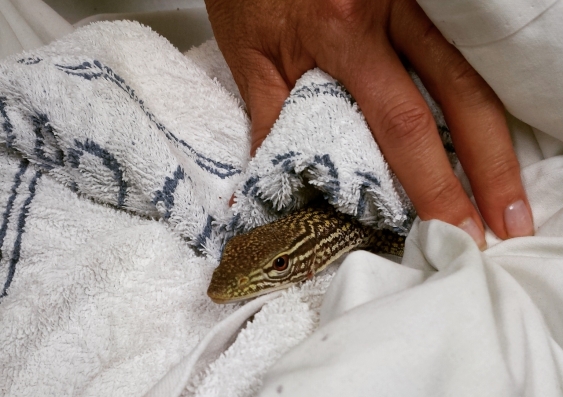 Everyone in this community of 230 is related through a complex web of skin and kin, making a mockery of my carefully constructed “family history”. In consults, silence is golden and I become aware of how uncomfortable it makes me to sit in a room without making a sound.

Gradually, through the silences, the most incredible stories emerge.

Like the tales of survival from the 1928 Coniston massacre, Australia’s last mass killing of Aboriginal people. Estimates range from 31 to more than 100 dead at the hands of police and settlers. Many young Aboriginal kids survived only after being hidden in the long grass by their mothers.

Others in the community recall the removal of siblings during the Stolen Generations, or the arrival of soldiers during the 2007 Intervention. The academic becomes starkly, unflinchingly personal.

Some ailments are definitely seen as white fella problems that require attention at the clinic, but bush medicine and traditional healing also have their place. I have the privilege of watching a ngangkari (traditional healer) minister to a haemorrhaging renal patient before she is airlifted out by the RFDS.

There is a strong belief in the kadaitcha man, a vengeful spirit thought responsible for all manner of misfortunes, and in the power of “pointing the bone”, or fixing someone with a curse. 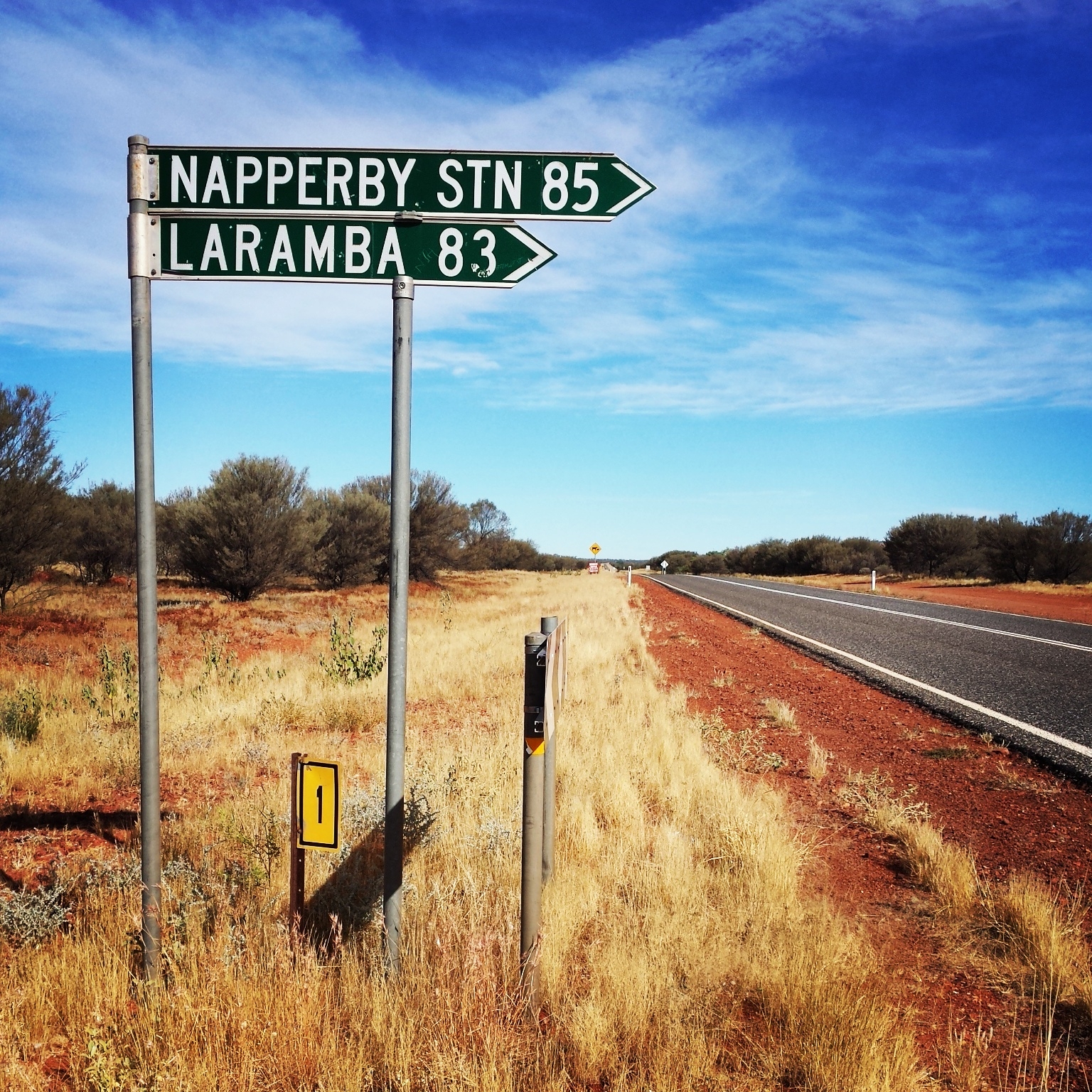 Blink and you’ll miss it. The turn-off to Laramba, 120 km from Alice Springs. Photo: Amy Coopes

Even in the blazing, 46-degree heat the elderly women keep their hair tucked under a beanie; a single strand can be used to target people for ‘boning’. I quickly learn to sweep up and bag the offcuts from our impromptu after-school hair salons for parents to take home for safekeeping.

The kids are the best part of the job. Like clockwork, a riotous gaggle bursts through the clinic’s doors at 3pm every day, clamouring for their chewable vitamin C.

Living on country is humbling, overwhelming. It’s an assault on the senses.

The vivid rust of the earth contrasts with a sky so blue it defies the lens. Children, silhouetted by the sinking sun, dig for lizards and kick a threadbare Sherrin football on the dusty oval.

The smell of ochre and wood smoke lingers for days after Elders perform a cleansing of the clinic during sorry business following a death.

This is the land of Clifford Possum Tjapaltjarri, one of Australia’s most celebrated Aboriginal painters. It was also home to Clifford’s stepfather Gwoya Jungarai, whose likeness graces Australia’s $2 coin.

There are snakes, camels and thorny devils; roos and perentie by the hundreds, too, if you know where to look for their tracks.

I have so much to learn. I can’t wait to go back.