Opinion Health Check: is snoring anything to worry about?

Snoring has been linked to serious health conditions such as obstructive sleep apnoea and cardiovascular disease, writes Jason Amatoury. 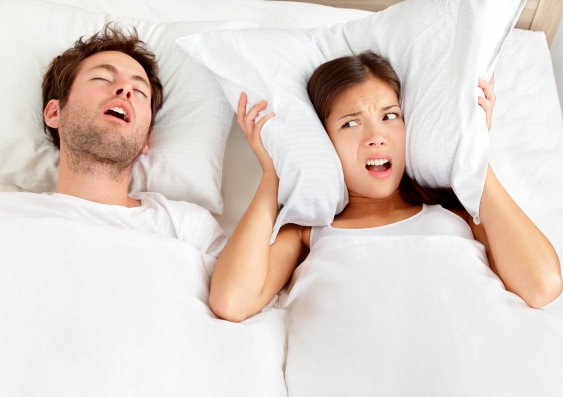 There’s nothing quite like the sound of snoring as the ultimate sleep interrupter.

But snoring can be more than just a frustration to those in your vicinity. Sometimes snoring is linked to more serious health problems, such as obstructive sleep apnoea. An emerging line of research suggests snoring may directly contribute to cardiovascular health problems.

How does snoring occur?

When we go to sleep, the muscles of the upper airway relax, causing it to become “floppy” and partially collapse. This occurs to some extent in all of us.

However, in some people the airway is excessively narrowed, particularly at the level of the tongue and soft palate/uvula (the visible structure you see hanging at the back of the throat). As we breathe in, we produce suction pressures to draw air into the lungs. This further narrows the airway (similar to when sucking too hard on a straw) and can cause upper airway tissues such as the soft palate to vibrate or flutter, like a flag in the wind. This movement creates the noise of snoring.

Rapid opening and closing of the airway – such as the base of the tongue banging against the back of the throat – also contributes to snoring.

What can trigger snoring?

Being overweight increases fat around the neck, compressing and narrowing the throat. But thin people do snore too, and many who are overweight do not.

A blocked nose – due to a cold, allergies, polyps or anatomical abnormality – creates the need for greater suction pressures to draw air into the lungs when breathing, which further narrow the airway. Mouth opening often occurs when the nose is blocked during sleep, which itself can cause snoring (via airway anatomy and pressure changes).

Sleeping on your back contributes to collapse of the airway, as gravity pushes the tongue and soft palate towards the back of the throat.

Enlarged tonsils narrow the airway, and are a primary cause of snoring in children.

Smoking can irritate the membrane that lines the nose and throat, causing fluid build-up (oedema) that narrows the airways.

Pregnancy often triggers snoring in the second and third trimester as a result of physiological changes that narrow the upper airway.

Burden of snoring for well-being

Snoring can create a dry mouth, sore throat or headache, and can leave you feeling tired.

It can place significant strains on personal relationships, particularly your bed partner, but also those sleeping in an adjacent room or even sometimes on the other side of the house!

Snoring forces many couples to sleep in separate bedrooms, disrupting intimate bonds. Snorers are often embarrassed to sleep among others, promoting anxiety and hindering their social relationships.

Sleep disruption caused by snoring can make you and others cranky and irritable during the day, but also may lead to impaired memory and concentration and obesity and reduced immunity.

Snoring even has the potential to cause hearing loss for your bed partner. Given some snores reach over 80 decibels (equivalent to the loudness of a jack hammer, motorcycle or low flying jet), this idea is not so far-fetched.

Snoring can be a marker for obstructive sleep apnoea, a disorder where the upper airway repeatedly closes during sleep, and breathing stops for at least ten seconds at a time. Obstructions to breathing can sometimes last for more than a minute and occur over 100 times an hour, starving the body of oxygen and fragmenting sleep.

Over the last decade, some research suggests heavy snoring itself may be a direct cause of cardiovascular complications, particularly a condition known as carotid artery atherosclerosis.

The carotid artery is the main vessel supplying blood to the brain. When affected by atherosclerosis, fatty deposits known as plaques form in the wall of the artery. Over time these can cause the blood vessel to narrow and limit blood flow.

One study has shown that snoring vibrations are transmitted to the carotid artery, which can damage its wall and lead to the development of atherosclerosis. Subsequently, snoring may rupture a formed plaque, resulting in pieces of the plaque moving through the bloodstream and blocking small vessels in the brain. However, additional research is required to bring further clarity to this hypothesis.

In children, snoring is associated with behavioural issues and poorer academic performance.

Given the multiple causes of snoring, there are numerous potential treatments available that work on some but not others.

There are several medical treatments for snoring that require professional advice. If you snore regularly, it is highly recommended you see a sleep and respiratory doctor for diagnosis and to determine the right treatment for you.