How the DSM-5 has come to grief 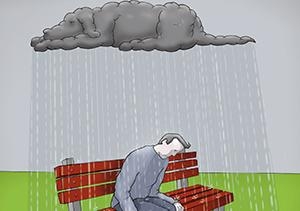 Courtesy Matthew Johnstone, I Had a Black Dog

“The Diagnostic and Statistical Manual of Mental Disorders or DSM-5 is about to be published and there has been increasing public and professional concern about the DSM-5 system ‘pathologising’ normal human states,” says Scientia Professor Gordon Parker, from UNSW’s School of Psychiatry.

Particularly controversial is the DSM-5 proposal that grief be included as a depressive disorder, a development that could lead to “unhappy” people being treated with antidepressants or antipsychotic drugs, says Professor Parker, the founding executive director of the Black Dog Institute.

Professor Parker has published a provocative challenge to the DSM model – titled ‘Opening Pandora’s box: how DSM-5 has come to grief’ in the journal Acta Psychiatrica Scandinavica.

The paper considers how grief and clinical depression can and should be differentiated, before outlining flaws to the theoretical papers generated by the DSM deliberations.

Professor Parker suggests that rather than drawing grief into the clinical depression diagnostic category, attention instead should be on existing depressive conditions (especially reactive depressive disorders) that currently lie outside the categorisation.

Predicting the risk of depressive disorder – promises and pitfalls