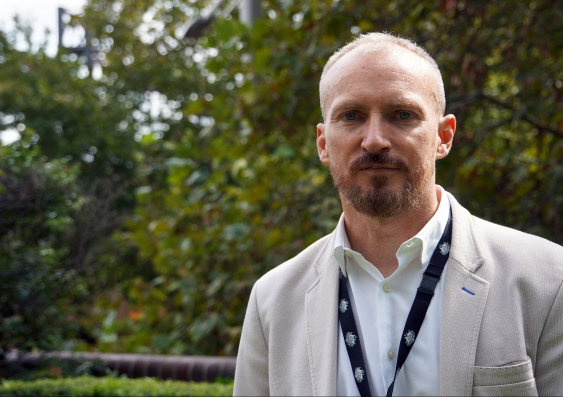 Every day, 38 Australians are told they have PD. Currently, 100,000 Australians are diagnosed with the neurodegenerative disease which affects an individual’s movement and balance. Symptoms vary from person to person but may include impulse control disorder, hallucinations, fatigue, pain and sleep difficulties.

While PD tends to be associated with elderly individuals, the sobering fact is, 20% of sufferers are under the age of 50 and 10% are diagnosed before they turn 40. It is the second most common neurological disease in Australia after dementia.

As there are no specific biomarkers to definitively diagnose PD, clinicians rely on a combination of signs and symptoms which include tremors and responsiveness to specific treatments. This means that PD diagnosis can arrive late in the progression of the disease when motor neurons have already been damaged. When younger individuals present with symptoms and their specialists are not expecting PD, the diagnosis may also be missed or delayed. Up until now, the only way to definitively diagnose PD is at autopsy.

Darren Collins was 44 years old when he was diagnosed with young-onset PD. His symptoms started to occur at least two years prior. It took almost two years of tests, doctor and specialist appointments before reaching a diagnosis. During this time, his condition gradually worsened.

As a former army medic, Mr Collins had some understanding that PD could affect people at a younger age but was shocked to learn the percentage of young-onset PD sufferers.

"Currently, my condition manifests itself primarily as an asymmetric, unilateral tremor on my right side. I first noticed the slightest of tremors in my right hand, mainly my ring and little finger in 2013. The tremors have increased in intensity and frequency. Also, I have developed an unusual gait when walking, as if I’m stepping over a log with my right foot. This is accompanied by an extended right arm swing," said Mr Collins.

Mr Collins said apart from the physical manifestations of the condition, his greatest challenge is dealing with the psychological (depression) and social aspects (confidence and relationships).

"I’m very conscious of my appearance in public and if I notice people staring at the tremors, it often exacerbates the condition through anxiety and causes the tremors to increase. This impacts my confidence in everyday situations, social interactions, work interactions and public speaking. I have developed an almost constant ‘tennis elbow’ pain in my right forearm due to my habit of sitting on my hand to hide the tremors in public.

"I've been refused entry and service in pubs. In all instances, I have managed to convince the staff I have a condition, yet the need to explain myself and my appearance is both embarrassing and tiring," explained Mr Collins.

A recent breakthrough in PD research by a team at UNSW Sydney means early and accurate diagnosis for the disease, which will lead to better outcomes for PD patients.

The research team that includes Dr Emma Sierecki and Dr Yann Gambin, have created a new diagnostic method for PD that combines a single-molecule counting technique with a rapid amplification analysis to detect alpha-synuclein – a promising biomarker for the disease. Alpha-synuclein is a sticky protein that clumps in the brains of people with PD. This diagnostic method will allow clinicians to detect PD at an early stage before the onset of clinical signs. The method requires five hours of amplification followed by 10 minutes of measurement time in its current form.

“Our work follows on the recent developments in the field of PD detection. After years of unsatisfying results, the scientific community is finding evidence that the presence of alpha-synuclein aggregates actually correlates with PD diagnosis. This has reignited the interest in developing early diagnostic analysis as protein build-up occurs years before symptoms appear,” explained Dr Sierecki.

"So far, we have results from cerebrospinal fluid, which is obtained following a lumbar puncture, a minor but not routine operation. Our current efforts aim at using blood as a sample to make it more accessible. Even though people may be prepared to get a lumbar puncture to have a definitive PD diagnosis, it is not a good protocol to follow clinical trials for example, where patients are required to provide samples often.  We are also exploring other samples such as urine or skin."

'Having a biomarker for PD is an important milestone for PD research, but it is only the beginning' - Dr Emma Sierecki

Mr Collins said so far, his PD journey has been minor in comparison to other sufferers, and he feels fortunate. However, the research at UNSW provides hope for the PD community.

"The UNSW research in developing an early and reliable test to detect and definitively diagnose PD is a massive development. The two years I spent between the tremors first appearing, to the appointment at Westmead Hospital when I was told I had PD was an extremely anxious and frustrating period. Quick, definitive diagnosis will lead to earlier interventions and peace of mind," said Mr Collins.

Dr Sierecki said there is hope for people who have not yet been diagnosed with PD. Early diagnosis also means therapeutic intervention can commence sooner, delaying and potentially preventing the apparition of more developed symptoms.

"Parkinson’s disease is a progressive disorder that is not linked to a single, well-identified cause. There is still much to understand about the origin and progression of the disease and the diversity. Having a biomarker for PD is an important milestone for PD research, but it is only the beginning."

This research is supported by a grant from the Shake It Up Australia Foundation and the Michael J. Fox Foundation.