The Kirby Institute's new research collaboration with Myanmar's University of Medicine 2 will build research capacity in infectious diseases in the country, which faces considerable health challenges. 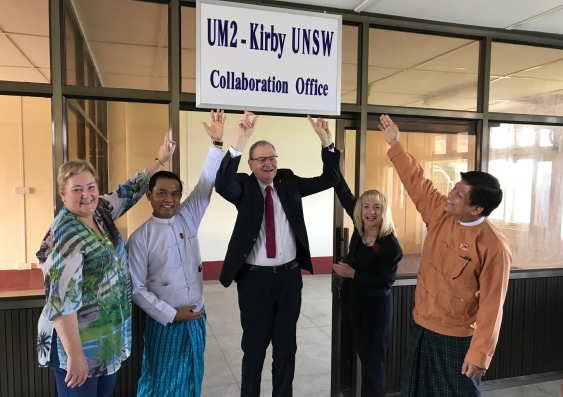 A new international infectious disease research collaboration between The Kirby Institute at UNSW Sydney and the University of Medicine 2 (UM2) in Myanmar was launched today in Yangon.

The collaboration was announced by Australia’s Chargé d’Affaires in Myanmar, Mr Nick Cumpston, and attended by a high-level Australian parliamentary delegation.

It will build research capacity in infectious diseases in Myanmar, with a particular emphasis on HIV, tuberculosis and malaria. The work is expected to inform local public health policy as well as national, regional and international management guidelines for these diseases.

Professor Aye Tun said working with an Australian university will significantly improve the quality of medical education at UM2, particularly in relation to research. “This commitment from the Kirby Institute is invaluable to us. It will help bring our research capacity to international standards.”

Scientia Professor David Cooper, Director of the Kirby Institute said the collaboration with Myanmar is central to the Kirby Institute’s efforts to work in close partnership with Australia's neighbours to eradicate disease. “It is our responsibility to take the clinical lessons we’ve learned in Australia and share them with those in our region,” said Professor Cooper.

Dr Josh Hanson from the Kirby Institute will be working with colleagues and communities in Myanmar on the collaboration. “We empower communities to lead research that matters to them and we work together to find practical and meaningful solutions to defeat epidemics,” he said.

Myanmar faces considerable health challenges. The World Health Organization has identified it as one of 13 countries in the world with the most serious tuberculosis problem. It is estimated that 222,000 people in Myanmar are HIV-positive, with only half receiving antiretroviral treatments. In 2015 there were over 240,000 cases of malaria, and anti-malarial drug resistance is increasing.

The Australian Government's Department of Foreign Affairs and Trade provided Myanmar with $78 million in Official Development Assistance in 2016-17. A parliamentary delegation travelled to Myanmar in June with the Pacific Friends of the Global Fund to Fight Malaria, TB and HIV. Delegates met with government, university and community sectors to scope opportunities for enhanced international partnership and collaboration.

The launch on Friday was attended by key leaders in Myanmar’s health policy, including HE U Naing Ngan Lin, Minister of Social Affairs in the Yangon Region Government and members of the Yangon Region legislature.