Work by PhD graduate Dr Simon Graham to encourage Indigenous boys to be tested for sexually transmissable diseases is having a positive impact in Aboriginal communities aross NSW. 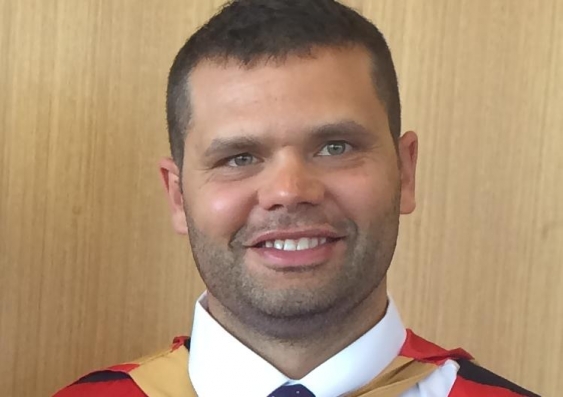 Based at The Kirby Institute, Dr Graham, a Narrunga man from the York Peninsula in South Australia, spent two years working closely with Aboriginal communities in regional NSW on an intervention that has resulted in significant improvements in the rate of testing and treatment of gonorrhoea and chlamydia in young people, preventing complications associated with these asymptomatic infections.

“I think what’s become obvious recently is how academic research can be used in a practical way at the grassroots level. It’s not enough to describe the problem any more – what’s crucial is research that will prevent an infection from occurring or improve the health of Aboriginal people,” says Dr Graham, who graduated this week from UNSW. He is only the second Aboriginal Australian to have completed a PhD at UNSW Medicine. The first was Dr Jillian Guthrie.

“During this project we built trust with the communities – they were doing the work on the ground and I did the number crunching and research component, which helped them increase sexual health testing and diagnosing new infections and providing training to clinic staff which improved the management of these infections.”

In NSW, unlike Western Australia, South Australia and the Northern Territory, the prevalence of chlamydia and gonorrhoea among Aboriginal people is not known. This project has provided the local Aboriginal communities with information about the prevalence of these infections in their community so they can build targeted clinic and public health programs.

Based on his data and working with a local sexual health physician, the communities then developed action plans to increase testing rates, such as sending text messages asking young people to come to the clinic, testing boys at a local football carnival, or adding sexual health checks to other routine adult health examinations.

As a result of this work, testing rates for these infections rose from around 7% to more than 35% in the communities – three times higher than the testing rates in Sydney for non-Aboriginal young people. These rates have been sustained in the 12 months since the project finished.

The increase in chlamydia testing resulted in the number of diagnoses more than doubling, with 11% of participants returning positive results. However, only 0.7% of gonorrhoea tests were positive in the two-year study periods.

The project identified and implemented better ways of ensuring timely treatment and also offered training of clinical staff and sexual health education of the wider community, which have had long lasting benefits for the communities involved.

The first member of his family to go to university, Dr Graham completed an arts degree at Flinders University before working in foreign aid with the Department of Foreign Affairs and Trade and then heading to Southeast Asia to work with families affected by HIV in Thailand and Vietnam.

Returning to Australia, he obtained a Professional Certificate in Indigenous Research through the University of Melbourne and the prestigious Masters of Applied Epidemiology through the Australian National University – work he completed at The Kirby Institute and the National Perinatal Epidemiology Statistics Unit at UNSW.

Dr Graham plans to expand his program to other Aboriginal communities in NSW, with a special focus on hepatitis C, a condition which is more complex to treat and manage than chlamydia and gonorrhoea.