Research led by UNSW Sydney's Vice-Chancellor has found screening methods for ovarian cancer do not improve survival rates from the disease. 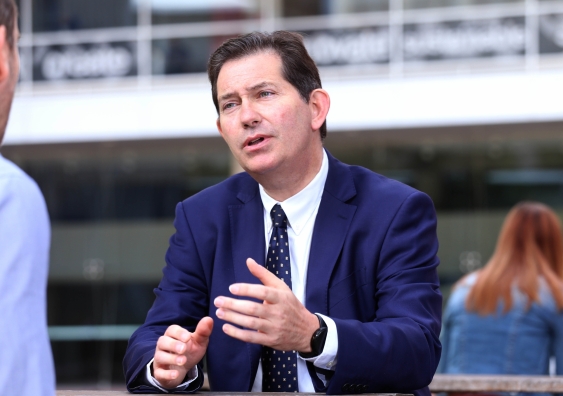 Prof. Ian Jacobs said the study's findings were deeply disappointing and it is critical that research into ovarian cancer continues. Image: UNSW

A more than 30-year study into the long-term impact on mortality rates of screening for ovarian cancer has found that the cancer can be detected early and before women develop symptoms, but it does not translate into saving lives.

The United Kingdom Collaborative Trial of Ovarian Cancer Screening (UKCTOCS) was designed to test the hypothesis that a reliable screening method that picks up ovarian cancer earlier, when treatments are more likely to be effective, could reduce deaths.

The study involved more than 200,000 postmenopausal women and was one of the largest trials undertaken in the UK. The results were published in The Lancet this week.

Professor Ian Jacobs, Vice-Chancellor of UNSW Sydney has led the ovarian cancer research program since 1985, and was the lead investigator of UKCTOCS from 2001 until 2014.

As a young doctor in London, Prof. Jacobs saw many women suffer and die from ovarian cancer. For the past 36 years, he has worked with a team of experts in the UK and USA to find a screening test to detect the cancer early. Given what was known about early diagnosis of other cancers when the study began, the team were hopeful that early detection of ovarian cancer would save lives.

UKCTOCS used two different screening methods to detect ovarian cancer, with participants randomly allocated to one of three groups: no screening; screening in the form of an annual ultrasound scan; or annual ‘multimodal’ screening involving a blood test as an initial test followed by ultrasound as a second test.

The trial looked at data from women whose progress was followed up for an average of 16 years. Women aged between 50 and 74 were enrolled in the trial between 2001 and 2005. Screening continued until 2011, and follow-up until 2020.

“This was a very large trial conducted with rigor and with enormous attention to detail. The multimodal screening strategy did succeed in detection of ovarian cancer at an earlier stage. However, even with this shift in stage, the number of deaths from ovarian cancer was not significantly reduced between the screened and unscreened groups,” Prof. Jacobs said.

“This is deeply disappointing and frustrating given the hope of all involved that we would save the lives of thousands of women who are affected by ovarian cancer each year.”

Prof. Jacobs said the UKCTOCS results meant that ovarian cancer screening using these methods could not be recommended for the general population.

Though the results were disappointing, Prof. Jacobs said the study had advanced understanding of ovarian cancer and other diseases. Significant research is being done on other cancers and diseases, such as cardiovascular disease, using the samples and data from the UKCTOCS study. The UKCTOCS team have also created a rich resource of data for researchers who will continue the work on ovarian cancer.

“We now better understand the natural history of the disease, have created a template for large, randomised trials, and can build models of what is required of new screening tests,” Prof. Jacobs said.

“Research does not always give you the results you strive for, but it is never futile. Every stage of this trial brought us greater understanding of ovarian cancer and the information will inform future research.”

Prof. Jacobs said the UKCTOCS story is one of enormous passion and goodwill and he thanked Professor Usha Menon, Lead Investigator of UKCTOCS, his co-investigators, the funding agencies – including the Eve Appeal, Cancer Research UK, the Medical Research Council and the NHS – and most of all, the women who volunteered for the trial.

“My thanks to the thousands of women, healthcare professionals and researchers who made this trial possible," he said.

In Australia, more than 1500 women are diagnosed with ovarian cancer each year. Most are not diagnosed until the disease is in a late stage and difficult to treat.

Prof. Jacobs has stressed it is crucial that the research continues. He is urging funding agencies and charities to keep supporting the 'vital mission to improve outcomes for women who suffer from this insidious disease'.