A simulated accident and realistic injuries had UNSW senior medical students putting their clinical skills to the test. 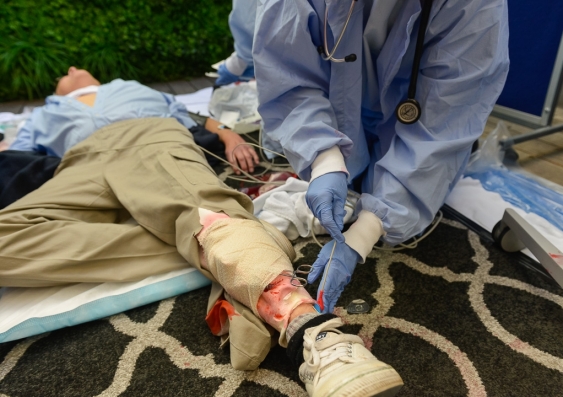 In a terrible accident, a man’s leg has been trapped between the doors of an elevator. The force of the closing elevators doors has snapped the bone in his left leg, creating a severe fracture. The patient is in immense pain and his injury is bleeding profusely.

This was the scene confronting UNSW medical students as they faced off in SimWars, a competition designed to put the students’ teamwork and clinical skills to the test.

Ten teams of four students were given a medical emergency that unfolded over 15 minutes in front of a live audience. The goal was to immerse the students in a real-life scenario, with detailed set design including makeshift elevator doors, and professional actors playing patient and bystanders.

The competition was a highlight of the annual Making the Connection careers expo for health-related careers at Liverpool Hospital. SimWars teams were judged on how they performed under pressure, such as their clinical management of the ‘patient’, teamwork, leadership and communication.

“Simulations really help to combine the skills you learn throughout your years of study,” said Mr Tang.

“You get to practice your theoretical knowledge and clinical skills but a simulation really adds that extra depth to things. You put skills together and see what you need to work on to be a more effective practitioner.”

Mr Tang is in the final year of his undergraduate studies and is interested in pursuing emergency medicine as a specialisation. SimWars offered extra value for him.

“I admire the skillset and abilities of emergency physicians – it is the type of person I would like to become,” he said.

“I especially respect their ability to stay calm when considering the breadth and variety of life-threatening clinical situations they have to deal with.”

Even though competitors were aware they were entering a simulation, the realism of the scene caught some off guard. Teams had been kept in a quarantine area before entering the competition area.

“We weren’t given a lot of information and we weren’t told there was a leg wound,” said Mr Tang.

“They told us ‘as soon as you hear someone scream for help, go outside’.”

SimWars can be traced back to 2007, when Yasuharu Okuda, Andy Godwin and Scott Weingart implemented it during the New York City Emergency Department Critical Care Conference. Since then SimWars has evolved into a competition held around the world. This is the second year it has been held at UNSW.

“As the changing paradigm of medical education evolves there is a call to focus more on small group interactions, and students have come to expect more innovative approaches to medical education,” said Ms Holmes.

“We’re committed to fostering curiosity and innovation in the educational experience to maximise student learning outcomes.”

Such was the realism of the simulation, Mr Tang said it even convinced unsuspecting members of the public a real accident was happening before their eyes.

“I was told by one of the café workers that earlier in the day a few of the customers were getting a bit concerned because they thought there was a real emergency going on.”