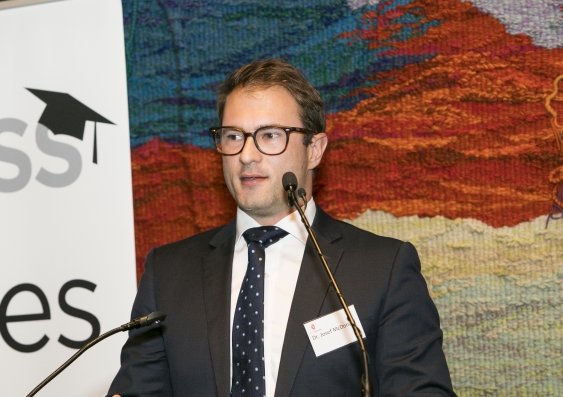 Science has been an influential constant in Dr Josef McDonald’s life since childhood.

“What I like about science is that no matter what your background is or where you are from, the truth is still the same,” he said.

As a Koori boy growing up at Stockton, Newcastle, he would often peer at the stars and planets through the lens of a telescope.

His mother encouraged him to borrow books that were text-heavy from the library to improve his reading skills. He chose astronomy books, which did have text, but also large colour images of planets and galaxies. Astronomy was a form of escape that reminded him the world was a bigger place.

“When you look up, it reminds you there is always a bigger order out there,” he said.

But it was more than just an interest in science that led Dr McDonald to study an undergraduate medicine degree at UNSW Sydney. Medicine was a vehicle to enable meaningful change in communities.  Science created opportunities, but medicine could be a catalyst to making a difference.

“That is the way I see medicine, it is the combination of science and social justice,” Dr McDonald said.

“Despite huge technological gains over decades, not everyone has necessarily benefited yet.

“Science alone cannot explain that – there must be something else. I think that is where the social justice element comes in.”

He was unprepared for the loneliness that accompanied the move away from his tight-knit community to Sydney.

“When I was in university I was quite homesick, because I come from a place with strong community and family ties,” he said.

'Despite huge technological gains over decades, not everyone has necessarily benefited yet. Science alone cannot explain that – there must be something else.'

Founded in 2005, the Shalom Gamarada Scholarship Program offers accommodation and mentoring at Shalom College for Aboriginal and Torres Strait Islander students studying at UNSW. The program, run by the not-for-profit organisation Shalom Gamarada, has helped 41 Aboriginal and Torres Strait Islander men and women graduate from UNSW, 23 of them as medical doctors. Roughly 10% of all Indigenous doctors in Australia have received support from the scholarship program.

“I can’t tell you how much of a relief it was. It was timely that the scholarship came through because I didn’t know how I was going to afford the accommodation for the next semester,” said Dr McDonald.

The scholarship did more than ease his financial stress. At Shalom College he found something more valuable – a new community.

“It was one of those places you felt you could belong, you felt as though you weren’t judged. You felt safe that you could open-up to others.

“Loneliness can very quickly be detrimental to studies and what the scholarship does is help students avoid that sense of loneliness.”

Dr McDonald was awarded a Bachelor of Medicine and Bachelor of Surgery in 2011 and is now training in Neuropsychiatry in Newcastle.

In psychiatry, he practises a more holistic understanding of health with a focus on not only the technical aspects of pathology, but also the social determinants of health. He said this approach is in line with a more Indigenous understanding of health and wellness, which considers body, brain, mind, society and culture as intertwined elements.

“Psychiatry allows me to spend time to address those sorts of factors,” he said.

“In that sort of broader view we don’t just look at receptors in the brain, what we consider are multiple aspects of a person, including the cultural aspects and socioeconomic circumstances.”

He continues to practise medicine as a discipline that achieves positive change, particularly in disadvantaged communities.

“Science in the absence of advocacy isn’t really helpful for us,” said Dr McDonald.

“We need the scientific aspect but also that it is delivered in the right way by our own people. That is the only way you can get the best outcome.”

On clear nights, Dr McDonald still goes stargazing. Even when armed with a cheap telescope, it is possible to view celestial bodies half a solar system away. He especially likes to show people the moons that orbit Jupiter and the rings of Saturn and see wonder on their faces when they realise how something millions of kilometres away can be brought closer with a single scientific instrument.

“What you can see is quite astounding,” he said.

“I tell people I’ve been blessed twice in my life. The first time was with an education and the second time is that now I am able to help my own community.”

He wants to continue exploring the interface of mind, brain and body, which he finds to be a challenging but highly rewarding topic.

“I’d like to continue practising medicine and use the skills that I’ve been fortunate enough to learn to alleviate suffering.”

UNSW's newest Indigenous doctors come from all walks of life