Medical graduate Brent O’Carrigan will use a $60,000-a-year Sir John Monash Scholarship to research the DNA of breast cancer at Cambridge University. 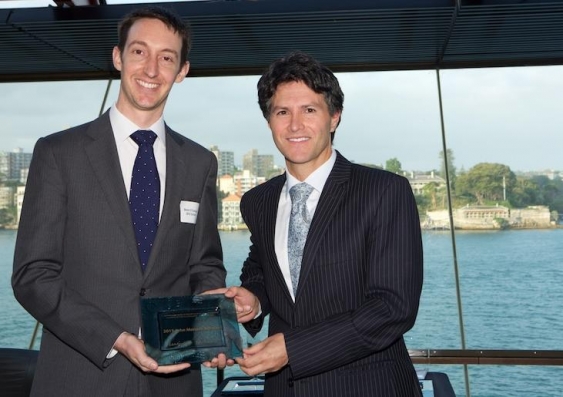 Brent O’Carrigan’s passport is about to come in handy. The UNSW Medicine graduate, who achieved first-class honours in 2007 and is now an oncology registrar at Royal Prince Alfred and Concord hospitals, has today been awarded a prestigious John Monash Scholarship to undertake a PhD at Cambridge University.

The $60,000-a-year scholarships, which have been awarded annually for the past 12 years, recognise leadership, academic excellence and potential contribution to Australia.

The group is working towards a blood test for breast cancer that can identify cancer DNA as separate from the patient’s DNA. Such a test will be an improvement for patients with early-stage breast cancer and those undergoing treatment for more advanced cancers, says O’Carrigan.

“Right now, we rely on pretty crude measures, such as scans and quite imprecise blood tests,” he says. Being able to reliably identify cancer DNA in blood will help clinicians to assess the effectiveness of treatments and make changes more quickly, and it will also help them to know if tumour surgery has been curative.

“For example, it would be great to be able to say to somebody, ‘You’ve had your surgery and there is no evidence that you have any residual [breast cancer] DNA so you don’t need to have chemotherapy,” says O’Carrigan.

“The John Monash Scholarships really support Australians to do world leading research and then bring their knowledge and skills home,” says O’Carrigan. “I am extremely grateful to the John Monash Foundation, its donors and benefactors because without their generosity, I wouldn’t be able to take up this extraordinary opportunity to study with a world-class cancer research group.

“It will be an honour to bring home everything I learn and to be able to contribute to improving cancer treatment here in Australia.”

Jillian Segal AM, the chair of the General Sir John Monash Foundation, says the organisation received about 300 scholarship applications this year and 14 were awarded. “The continuing, high level of interest is testament to both the prestige of the scholarships and to the growing pool of exceptionally talented young Australians who are interested in furthering their studies overseas and in contributing to their country.”

Sir John Monash (1865-1931) was regarded as the most successful and admired general on the Western Front during WWI. He led the electrification of Victoria in the 1920s, was Vice Chancellor of the University of Melbourne and helped found both the CSIRO and the Shrine of Remembrance.