Opinion Monkeypox in Australia: what is it and how can we prevent the spread?

Two cases of monkeypox have been reported in Australia. Resurgence of this virus could be due to the ending of smallpox vaccination. 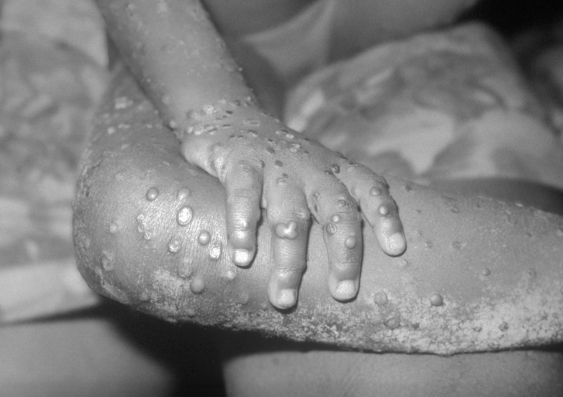 Monkeypox is caused by an orthopoxvirus that is closely related to the virus that caused smallpox, variola. Photo: CDC/Wikimedia

Two cases of monkeypox have been detected in Australia, following reported cases in several European countries. Both are in men just returned from Europe.

Health authorities have said the cases are not a cause for panic, but to remain vigilant for symptoms if you have just returned from overseas.

Monkeypox is caused by an orthopoxvirus that is closely related to the virus that caused smallpox, variola. Smallpox only infected humans, but monkeypox is an animal virus that occasionally infects humans after they are bitten or scratched by a monkey or other animal.

It is a respiratory virus and can also spread to humans without contact, probably through aerosols. However, it does not usually spread easily between humans, and typically only in close contacts. Studies have found about 3% of contacts of a monkeypox case will be infected.

A week or two after exposure, infection starts with fever, headache, swelling of the lymph nodes and muscle ache. Skin eruptions usually appear within one to three days of the fever commencing, and in most cases affect the face, hands and feet.

Why is it emerging now?

It was first identified in humans in 1970, in the Democratic Republic of Congo (DRC). It is a re-emerging disease that’s been causing large outbreaks in Nigeria and DRC since 2017.

Scientists have puzzled over why a previously rare infection is now becoming more common. The vaccine against smallpox also protects against monkeypox, so in the past, mass vaccination against smallpox protected people from monkeypox too. It is 40 years since smallpox was declared eradicated, and most mass vaccination programs ceased in the 1970s, so few people aged under 50 have been vaccinated.

There are even fewer in Australia, where mass smallpox vaccination was never used, and an estimated 10% of Australians have been vaccinated. The vaccine gives immunity for anything from five to 20 years or more, but may wane at a rate of about 1-2% a year. 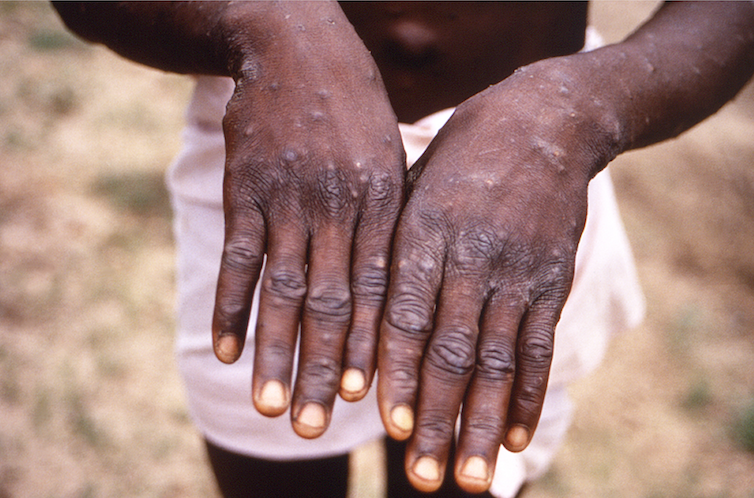 Monkeypox rash in an infected man in the Democratic Republic of the Congo. CDC

Our research shows waning of immunity from smallpox vaccination may explain the increasing outbreaks of monkeypox – it is more than 40-50 years since mass vaccination ceased.

In September 2018, a case of monkeypox occurred at a naval base in Cornwall, UK, in a person who had travelled from Nigeria. Simultaneously, a second case occurred in Blackpool in an unrelated person returning from Nigeria, and a nurse also became infected in the hospital.

In the current outbreak, the first case in the UK had travelled from Nigeria, where there have been over 500 cases and 8 deaths since 2017.

The current outbreak in the UK is the largest outside of Africa and has spread to many countries in Europe, North America and now Australia.

Clusters have occurred among men who have sex with men, a pattern not seen before. The initial importation could have spread at a venue or within a community that resulted in more spread in the same group.

This is an unusual outbreak, with unrelated cases in different locations in the UK. This could be explained by substantial numbers of asymptomatic infection, but asymtomatic infection is uncommon and usually in people who have had the smallpox vaccine.

In a well-studied outbreak in the US linked to imported animals, only three in 20 cases were asymptomatic, and they had been vaccinated. The other 17 cases all had the rash.

Most people infected in the current epidemic are too young to have been vaccinated, so substantial asymptomatic infection is unlikely. Further, smallpox does not transmit in asymptomatic people, so it is unlikely monkeypox will be very different.

Serological studies to measure asymptomatic infection are being done in the UK and should shed more light on this hypothesis. Hopefully further investigations can help us understand the epidemiologic links between cases in the UK and elsewhere.

This is the first time there has been travel-related spread from outside of the African continent, where the virus is endemic in animals. There have been a number of travel related importations to the UK, Singapore, Israel and other countries from Nigeria and DRC since 2017, but now the source of spread appears to be the UK, which is unprecedented. Given visits between the UK and Australia are very common, it is not surprising we now have cases here.

There are effective vaccines against monkeypox – the second and third generation smallpox vaccines, both live virus vaccines using the vaccinia virus. Vaccinia is another orthopoxvirus that confers immunity against smallpox and monkeypox, but can have serious side effects in some people, especially those with compromised immune systems.

Mass vaccination would not be warranted because of the side effects. The best strategy is to identify contacts and vaccinate them, rather than mass vaccination.

This is called “ring vaccination” and was used to eradicate smallpox. Monkeypox has a long incubation period (one to two weeks), so being vaccinated post-exposure can protect.

There are also effective antivirals against monkeypox and smallpox which were not available before smallpox was eradicated.

Given the unusual nature of this epidemic, it would be wise to ensure we have a stockpile of antivirals and enough of both types of vaccines, together with regulatory processes to use them against monkeypox.

Isolation of cases and quarantine of contacts works to curtail epidemics. We would also do well to draw on the contact tracing infrastructure developed during COVID, so contacts can be rapidly identified and quarantined, and the spread of the virus curtailed.