Sydney jazz musicians are using the sound and images of the human heart as part of their musical performance for National Science Week. 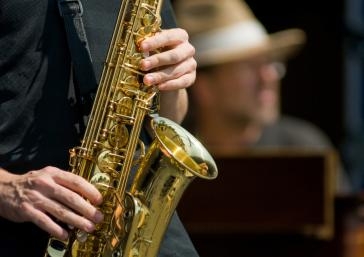 Some Sydney jazz musicians are giving fresh meaning to improvisation, by using the sound and images of the human heart as part of their musical performance. The event is part of festivities for National Science Week (August 10 – 18).

The novel event, i Heart Music, is being hosted by the Museum of Human Disease at UNSW.

It’s part of a series of live performances that will be seen around the country, including Southbank in Melbourne, the CSIRO Discovery Centre in Canberra and regional centres.

Three jazz professionals, including a drummer who works with virtuoso Vince Jones, are part of the series. They will play at UNSW Medicine’s Museum of Human Disease, nestled between Perspex boxes holding exhibits such as lungs damaged by emphysema and feet affected by gangrene, while the music is beamed to audiences at various locations around the country.

Audience members will have the opportunity to be part of the performance. Volunteers can be hooked up to an Electro Cardio Graph (ECG), a machine most often used for diagnostic or research purposes, but in this instance it records the sound of the heart for the improvisation.

Another medical device, a cardiac ultrasound, will be used on the volunteer to generate a picture of the heart. The live image is projected onto a large screen to accompany the performance.

“It is a really fun event which aims to raise awareness about health, disease and our role in both,” says Williamson.

“There are synergies between health and music: both have a rhythm. In music there is often four beats to the bar, for a heart there’s 70 beats in a minute that means 3 billion beats in a lifetime.”

The initiative is supported by the Australian Government as part of National Science Week.

What: i Heart Music: jazz performance using the sound and images of the human heart

Learn to survive a zombie apocalypse this summer