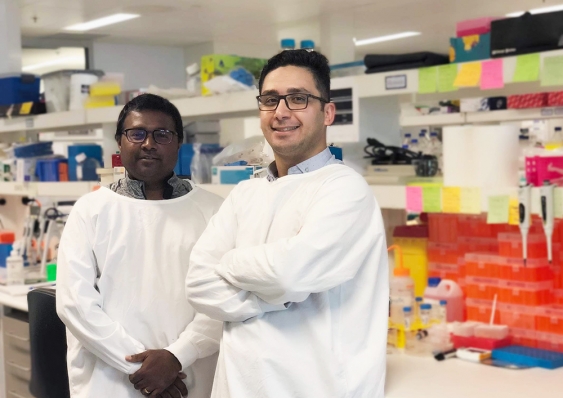 When Hossein Tavassoli first told his mother that he was researching heart disease, she responded with “But, you’re an engineer...”

She was right, of course – Hossein’s undergraduate degree was in material engineering – but at the time, he found it difficult to explain the intersections between biology and engineering. Now, not only is he a nanoengineer working in a tissue regeneration lab, but he is also an avid science communicator.

“It’s very interdisciplinary,” says Hossein, who is completing the biology component of his PhD at UNSW Medicine and the engineering component at Swinburne University of Technology.

Hossein began working with the heart several years ago after finding himself interested in the heart-blood development and regeneration research of UNSW biologists Dr Vashe Chandrakanthan and Professor John Pimanda. Fortunately, they were intrigued by the technology Hossein was working on, and a collaboration began.

“The heart is the most important organ, with heart disease the number one killer in the world,” Hossein says.

“My goal is to find a way for mending broken hearts – or, in other words, to find a solution for cardiac problems.”

They develop this ability while in the embryo, which – although impossible for scientists to view under a microscope – could hold the clue to repairing heart damage in humans.

“We cannot put a mouse embryo under the microscope, but what I do is model what is going on in the embryonic heart in a microchip, at a microscale.”

The microchip that Hossein nanoengineered has been embedded with mice heart cells. It was built to mimic the embryonic heart cells’ natural environment, enabling the researchers to study how the regenerative cells communicate with each other. Knowledge of how this works could be applied to repairing human heart tissue, although Hossein speculates this technology is at least a decade away. In order to expand their research, additional project funding is needed.

Hossein sees many benefits to using nanotechnology in biomedicine.

“First of all, it’s cheap. You don’t need to have lots of plastic, petri dishes, culture media – all those things we need for the cell culture. Secondly, you don’t need too many animals or cells or patients. Instead of 10-100 million cells, what I need in that tiny family is like 100 or 1000 cells.

“Or, in a simple way, instead of needing a hundred mice for each series of experiments, I just need one or two.”

Hossein observes the cells interacting via a microscope connected to a supercomputer. Visually, it looks like a microchip. “It has channels, it has valves – it is like a simplified model of a heart.”

When the cells interact in just the right way, it starts to pulse – just like a heartbeat.

A nursery in the lab

Hossein is lost for words when remembering the first time he saw the cells start beating.

His work, he explains, differs from many other PhD students. Instead of working from 9-5, he needs to visit the lab at all hours – sometimes as late as midnight – to feed the cells. One particular lab visit stands out to him.

“I came to the lab on Friday to add culture media, which is food for the cells. The day after, I was at Coogee Beach with some friends and said, ‘I should go, I need to check on my cells.’”

His friends were confused, but it was normal routine for Hossein. It was then he realised that the cells were effectively his babies.

Only when he arrived, they weren’t beating.

“I thought, ‘Oh no, something is wrong!’” He quickly added the culture media, put them in the incubator, and waited.

“It was incredible,” Hossein remembers.

For Hossein, when the cells are beating, they are a symbol of hope and life.

“As long as there is beating, there is hope.”

The importance of science of communication

Hossein knew that his family and friends were proud of his achievements but was frustrated at his inability to properly explain his research to them.

He remembers the specific moment when that changed.

Hossein was taking an Uber to university one night (to feed the cells, he recalls) when the driver asked what he studied. Knowing that the answer was convoluted, Hossein kept his response simple: “I’m an engineer,” he said.

“An engineer?” the driver responded. “Then why am I dropping you off at the medicine building?”

Hossein then had a realisation: if he could explain his work to an Uber driver, then perhaps he could also explain it to his mum.

From that moment, he tried to articulate his research to any driver who asked. He tested new ways of describing his work and kept the ones that worked best.

“I realised that it is important to explain what I'm doing, but in simple words, so that anyone can understand.”

The practice paid off. Earlier this year, Hossein was a finalist in FameLab Australia (a live annual science communication competition), a shortlisted speaker at TEDx Melbourne’s Open Mic, and last year was a finalist in AMP Amplify Ignite (a national PhD pitch competition). He now shares his research via Twitter.

“Science communication is an art,” he says. “For me, informing and educating is more important than doing just research all the time.