New scholarships funded by Western NSW Local Health District will help Indigenous students study medicine at UNSW and then return to the west of the state for internships.

The funding boost from the LHD will go to the existing Shalom Gamarada Scholarship Program, which will offer Indigenous medical students from western NSW full board and accommodation at UNSW’s residential Shalom College.

The partnership will support up to two students at a time, providing support over five years of training. After graduation, the students will return to the west for a 12-month internship.

“We hope this support will allow a future doctor to come from the west, return there upon graduation and even further their career in the west,” Mr Hazzard said.

Since 2009, the scholarship program, run by the not-for-profit organisation Shalom Gamarada, has helped 41 Aboriginal and Torres Strait Islander men and women graduate from UNSW, 23 of them as medical doctors. Roughly 10% of all Indigenous doctors in Australia have received support from the scholarship program. Several graduates have recently taken up placements at Dubbo Base Hospital.

“Each of these graduates is not just doing it for themselves, they are emissaries for greater things. The government, through our LHD, has recognised the value of this program and to be able to add and contribute to new scholarships is a privilege,” Mr Hazzard said.

“They both see first-hand every day the health issues of Aboriginal people in western NSW,” he said. “Their innovative response with this program is one reason why Dubbo hospital has a great reputation as a pivotal regional health care provider.”

UNSW graduate and former scholarship recipient Josef McDonald, who lived at Shalom College from 2006 until 2011 and is now a psychiatry registrar at John Hunter Hospital in Newcastle, spoke about the impact the scholarship has had on his medical work in the community. 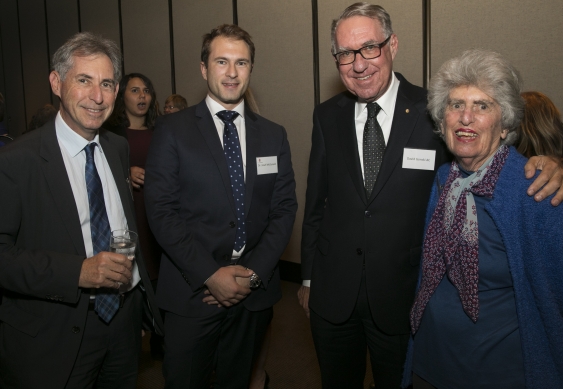 “I am so fortunate to be able to help people from my own community,” said Dr McDonald, an Awabakal man from the Newcastle area. “How do you value comforting a family after a suicide attempt? Or helping a mother who presents with psychosis after the birth of a baby? The investment in these scholarships is essential. By supporting Indigenous medical students, we can increase the number of Indigenous doctors. The education of non-Indigenous students in Indigenous health is also vital to destigmatise the subject with the hope of increasing participation. This is not only in the spirit of reconciliation but also with the hope it will improve Indigenous health outcomes.

“Shalom College provided was a good environment for study that is strongly anti-racism, which is such a big part of its success – it is such a safe environment. I benefited a lot from the role models there.”

Former director of Shalom College, Dr Hilton Immerman, who is a Shalom Gamarada Scholarship Trustee, said the new scholarships are very significant in increasing the number of Indigenous Australians studying and practising medicine at UNSW.

“The College has 130 students, with 24 Indigenous students on scholarship. There has been concern about the fact Indigenous retention rates are generally below 50%, but one of the things this program has done is increase retention rates; we have had a 90% pass rate, and over 70% completion rate,” said Dr Immerman.

“Many Indigenous medical students are competing against the brightest and most privileged students in the country. It's all the more remarkable there has been a high pass rate. Much of this is linked to the culture of the College – it is small with a high-level of support services.”