A study by UNSW researchers is evaluating a short, online-based therapy that holds great promise for people who suffer from panic disorder. 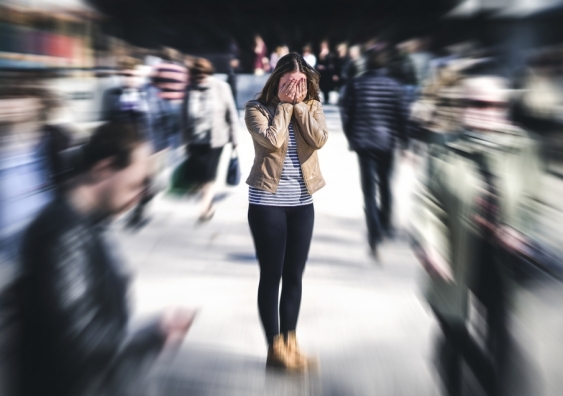 Scientists from UNSW Science’s School of Psychology and St. Vincent’s Hospital are leading world-first research to learn more about a novel therapeutic approach for people who suffer from panic attacks. They are conducting a study that seeks to treat people with panic disorder and agoraphobia – the fear of places and situations that might lead to panic attacks – with just one week of therapy.

In the study, the researchers are delivering an adapted version of cognitive behavioural therapy (CBT), an approach already known to be effective for some people with anxiety and depression. Both the concept of delivering CBT online and in intensive format has already been shown to work – but never in combination.

“We know that CBT can be delivered in intensive format over a short amount of time in-person. A few recent studies have already shown that it’s an effective delivery format in panic, OCD and PTSD and specific phobias, like spiders,” says study lead Eileen Stech, a trainee psychologist from UNSW Psychology, who leads the study.

“And a number of research teams have developed online self-help programs that people can work through – these can overcome some of the barriers to access, like cost, and people can do it at night if that’s more convenient to them than having to see a therapist during regular office hours.”

'We’re testing whether we can ... deliver it online, so we can reach people in rural and remote areas, as well as people who are too impaired to travel to therapy. No one has tested this ever before.'

The team is now testing whether the two formats can be combined.

“We’re testing whether we can take that exciting intensive model and deliver it online, so we can reach people in rural and remote areas, as well as people who are too impaired to travel to therapy. No one has tested this ever before,” Ms Stech says.

The researchers are working with people with panic disorder, i.e. people experiencing frequent panic attacks or worrying a lot about having panic attacks, as well as avoiding situations and places in their life because of fear of panic.

“Frequency of attacks can be a marker of severity, but not always – some people might just have one really awful panic attack and then be so afraid of future attacks that they really dramatically alter their lifestyle really quickly. It’s a vicious cycle, where they may have more panic attacks because of that,” says UNSW psychologist Dr Jill Newby.

People who are eligible for the study after the initial screening process need to commit three to four hours a day on therapy activities for seven days. During that time, participants complete online, comic-style lessons that follow a person’s journey of overcoming panic disorder through CBT. The study uses an adaption of the team’s existing six-lesson panic program, focusing on the key strategies.

“The online comics lessons which follow that person’s experience are accompanied by lesson summaries, which have more detail on how to implement the activities and worksheets so participants can apply it to their own life. There’s also demonstration videos and FAQs,” Ms Stech says.

'Although facing your fears takes courage, many patients report it is a very empowering process.'

Participants then spend the rest of the time each day putting the activities into practice. A key component of the therapy is exposure – i.e. exposing yourself to the trigger of panic, which can be certain body sensations, places or situations. Over time, people with panic disorder become very sensitive to small changes in their body sensations, fearing they signal danger, such as a heart attack or stroke.

“Participants are guided through specific exercises that help them re-evaluate those fears and develop more realistic thoughts,” Ms Stech explains.

“They are guided through a framework that allows them to re-enter feared situations in a gradual and controlled manner, always taking things step by step. Although facing your fears takes courage, many patients report it is a very empowering process.”

Participants can also access support from clinicians via email and phone throughout that week to help them complete the exercises.

The team then follows participants up with questionnaires one week and two months after the treatment week.

“We use a number of standardised self-report measures that have been widely used in many past clinical trials to measure symptom change. We’ll be looking at change from beforehand to after, but also in comparison to another study where the online panic program is run over two months. That’ll show us whether patients of both studies are getting similar outcomes,” Ms Stech explains.

People who struggle with panic disorder, are over the age of 18, live in Australia, have regular access to the internet and are interested in taking part in the one-week panic program can learn more on the team’s Virtual Clinic website.