Opinion Parents misled about dangers of living with lead pollution

Health educators are telling Australian parents they can protect their children from high levels of lead exposure associated with lead mining and smelting – yet there is no evidence this is true, write Donna Green and Marianne Sullivan. 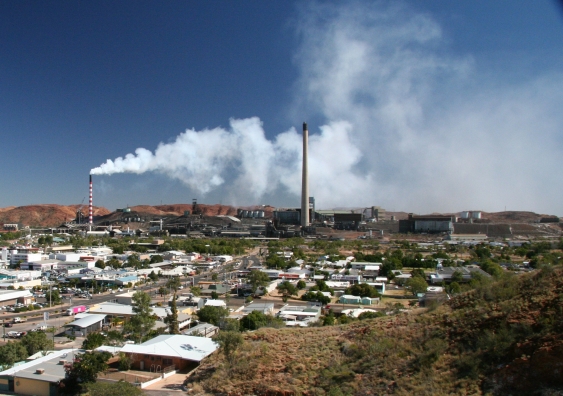 OPINION: Parents in three Australian states are being given misleading information about the dangers of lead exposure for babies and small children – including failing to warn pregnant women about the risks of miscarriage.

Lead is particularly harmful to unborn babies and young children. As the World Health Organization warns, “there is no known level of lead exposure that is considered safe”. Childhood lead exposure is estimated to contribute to about 600,000 new cases of children developing intellectual disabilities every year.

Yet our research, published in the international journal Environmental Health, found that official online educational materials aimed at people in Broken Hill in New South Wales, Mount Isa in Queensland and Port Pirie in South Australia understate the health risks of lead for fetuses, babies and children.

With slogans such as “Lead, it’s in our hands” and “Living safely with lead”, the cities' health education programs all promote the idea that parents can sufficiently protect their children from lead exposure through individual actions, such hand washing, household cleaning, and taking precautions in the garden.

Yet there is no evidence to show that’s true. In 2014, a group of international experts reviewed 14 studies involving 2656 children. They found that “educational and dust control interventions are not effective in reducing blood lead levels of young children”. They also concluded that there was “insufficient evidence” to show that reducing children’s exposure to contaminated soil would reduce blood lead levels.

So what exactly are parents in Broken Hill, Mount Isa and Port Pirie being told? And what risks are pregnant women and families in the United States being clearly warned about that parents in Australia are not?

Why do American parents get clearer warnings than Australians?

Emissions from lead mining and smelting activities in Broken Hill, Mount Isa and Port Pirie have been linked to higher levels of lead in local children’s blood.

These blood lead levels exceed the National Health and Medical Research Council’s (NHMRC) new public health intervention level of 5 micrograms per decilitre in about half of all children in Broken Hill and Port Pirie, as explained in The Conversation last year.

Lead exposure puts children at risk of significant health effects including developmental, learning and behavioural problems. For example, a recent study found that children living closest to the Broken Hill mine had lower school test scores and were more likely to be diagnosed with developmental disabilities.

In Port Pirie, the SA government and lead smelter operator Nyrstar have worked together on the Targeted Lead Abatement Program, or www.tlap.com.au. (TLAP’s website is currently down, with a message saying the site has “crashed”.)

As part of our new study, we compared those Australian websites with international best practice, published by the US Centers for Disease Control and Prevention (US CDC). We found important differences between them.

Like the World Health Organization, the US CDC plainly states: “No safe blood lead level in children has been identified.”

In contrast, at the time of our analysis, none of the materials from Broken Hill, Mount Isa or Port Pirie made such a clear statement about lead exposure and harm to children.

As our article went through the peer review process, one page of the Mount Isa website “About Lead” was updated to include a new statement:

There is no safe level of lead that has been proven not to cause any health problems.

However, that statement is not repeated on other pages, including the one labelled Mount Isa Children, which instead begins with advice to “Wash hands regularly”.

The US CDC also warns parents that the “effects of lead exposure cannot be corrected” and that “even low levels of lead in blood affect children.”

At the time of our analysis, only the Broken Hill site contained comparable information on low-level exposure and the fact that lead can cause permanent damage to children.

Missing warnings for pregnant women and kids at higher risk

All three of the Australian websites left out important risks of lead exposure during pregnancy.

The US CDC has a page specifically on lead and pregnant women, using blunt language to warn women that lead exposure during pregnancy can “put you at risk for miscarriage” and “cause your baby to be born too early or too small”.

In contrast, none of the three Australian sites mentioned those crucial risks to babies. (Compare the clear US advice to that given to pregnant women in Broken Hill and Mount Isa.)

People can often be affected by lead exposure without showing obvious symptoms. Yet only the Broken Hill materials provided parents with a schedule for when they should have their children’s blood tested for lead exposure.

The US CDC also discusses the fact that racial minorities and low-income families may be at higher risk of lead exposure. Only in Broken Hill were racial differences in blood lead levels discussed, even though higher average blood lead levels have been reported in Indigenous children in both Mount Isa and Broken Hill.

Our study also found that incomplete information on the risks of lead in soil, even though soil and dust are major pathways of exposure. Only the Broken Hill materials said that:

While the other cities’ websites acknowledged that soil may be contaminated, none of the three contain information on the acceptable Australian standard for lead in gardens (300 milligrams per kilogram) or the percentage of gardens that exceed the standard in each city. They also didn’t tell residents how they could get their soil tested to evaluate their family’s risk.

Because lead contamination is widespread in Broken Hill, Mount Isa and Port Pirie, and the potential for children to be exposed in their homes, gardens, and play areas is very real, the three websites make many recommendations for reducing children’s exposure.

These include intensive interior and exterior cleaning, personal hygiene, gardening, diet and food preparation. But the advice was not consistent across the communities.

For example, in Broken Hill and Mount Isa parents have been advised to let children play in areas with grass or turf cover or to provide a sand pit. But in Port Pirie, no specific advice on children’s play areas was given, except to cover bare soil.

Only in Port Pirie were parents advised to wash outdoor play structures. A recent study, however, found playground washing to be of limited effectiveness for reducing children’s lead exposure if contamination is ongoing.

Advice on eating homegrown vegetables also varied. In Port Pirie, children and pregnant women are told not to eat “leafy vegetables like lettuce, silverbeet, cabbage, broccoli and cauliflower”. No similar advice was provided in the other communities.

Additionally, some advice on how to reduce exposure to lead that is supported by researchhas not being shared with families in all three cities. Two examples include:

What needs to happen to make Australian kids safer?

The health education programs in Broken Hill, Mount Isa and Port Pirie currently place the overwhelming burden on parents to keep lead out of their children’s bodies, even though they are living in communities with historical and ongoing contamination.

Lead pollution is not a problem that parents can solve on their own. Reducing or eliminating lead emissions, removing children from the sources of exposure, and cleaning up environmental contamination is critical.

Based on our research, we recommend revising the advice to people in all three of these communities so that it is as clear and comprehensive as what is published by the US Centers for Disease Control and Prevention. Parents and pregnant women in Broken Hill, Mount Isa and Port Pirie need to be given all of the evidence-based advice about reducing lead exposure.

Those revisions should be led by the NHMRC, as Australia’s leading expert health body. And that work should be coordinated across the three cities, so that families aren’t given different advice depending on where they live. There should also be rigorous and independent evaluation of these programs to determine if they are effective.

Better lead health education is important. But it is also not a substitute for eliminating lead in children’s homes, play areas and gardens.

Donna Green is a Senior Lecturer and Researcher at the Climate Change Research Centre (CCRC) & Associate Investigator for the ARC Centre of Excellence for Climate Systems Science, UNSW.

Air quality monitoring to be expanded across NSW schools