UNSW Professor Lisa Maher has been recognised by the Prime Minister for her work in reducing the harm of drug use. 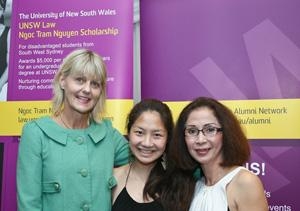 Professor Maher at the launch of the scholarship with Ngoc Tram Nguyen’s sister and mother.

UNSW Professor Lisa Maher has been recognised by the Prime Minister for her work in reducing the harm of drug use.

Professor Maher, a drug researcher focused on blood borne viruses, was named the winner of the Prime Minister’s Award for Excellence at the National Drug and Alcohol Awards at Parliament House.

Dr John Herron, Chairman of the Australian National Council on Drugs, announced the winner on behalf of the Prime Minister, Julia Gillard, in a letter which said:

“Professor Maher has an outstanding record of research, with a particular focus on prevention of infectious disease in vulnerable populations. Her academic achievements are matched by a commitment to translating research into action, thus bringing vital community services such as vaccination, counselling and education to many people.”

Based at the Kirby Institute for infection and immunity in society, Professor Maher is currently responsible for a national program in viral hepatitis surveillance in Australia and provides technical advice and assistance in countries including in South East Asia.

While work commitments in the UK kept her from attending, in her letter of acceptance she dedicated the award “to the drug users who are no longer with us and, in particular, to the memory of Ngoc Tram Nguyen.”

Lisa Maher and her husband, Dean of Law, Professor David Dixon were instrumental in setting up a scholarship in Ngoc Tram Nguyen’s memory at UNSW Law.

"Whether in South Western Sydney or Phnom Penh, one of the defining characteristics of my research is a commitment to working with, and for, affected communities.  My work – and this award – would not be possible without the engagement and support of those most directly affected,” she said in the letter.

She added: “... it is in Australia that I have had the privilege of conducting research that has made a difference. The willingness of policy makers and politicians – certainly not all of them and not all the time – to listen to the evidence and act accordingly is one of the things that I think distinguishes Australia in this field.”

Meanwhile, Associate Professor Anthony Shakeshaft from NDARC was highly commended in the excellence in research category.