Research of microbiota in health and disease has received a federal funding boost, with an additional $4 million committed towards the Microbiome Research Centre. 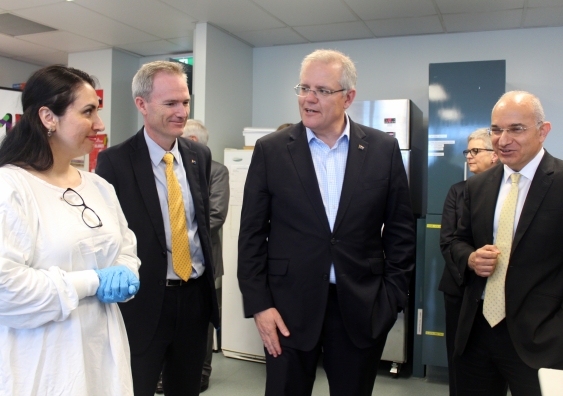 The MRC, which is due to open in February 2019, is a collaboration between UNSW, the St George and Sutherland Medical Research Foundation and the South Eastern Sydney Local Health District.

The funding, which is in addition to last year’s initial $4 million given to the centre towards its completion, will contribute to vital research being done at the Kogarah centre, including establishing a fully integrated bioinformatics unit and studies of the impact of the microbiome in pregnancy and early childhood.

“This research is continuing to lift up our medical industry in Australia – a key growth sector for the Australian economy,” said Mr Morrison. “The studies being done on the impact of the microbiome in mothers, infants and the future health of Australian children – that’s exciting.”

Mr Morrison said that growth of a medical precinct based in southern Sydney is attracting some of the leading scientists from around the country and will help to boost the local job market.

Mr Morrison was joined at the MRC by David Coleman, Banks MP and Professor Emad El-Omar, UNSW’s Professor of Medicine at the St George and Sutherland Clinical School and the director of the MRC.

“To have a centre of excellence in southern Sydney where we are bringing together the best and brightest is really important. With this level of funding this is really starting to happen,” said Mr Coleman. 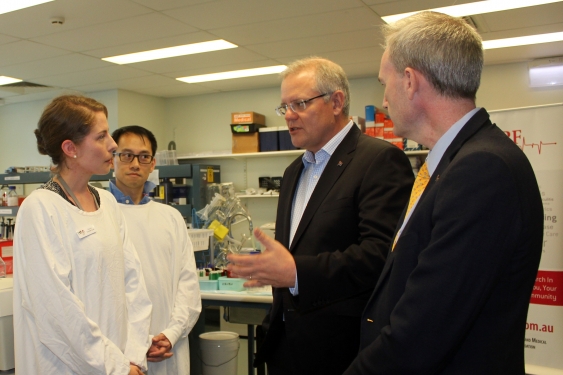 New funding will contribute to the MRC’s research into the ecosystem of specific bacteria, and how that can translate into effective treatments.

“We will lead international research collaborations into how microbiota play a unique role in both sickness and health, and how it can be harnessed to treat, prevent and cure complex diseases,” said Professor Emad El-Omar.

This new funding will be used to establish a fully integrated bioinformatics unit and team which is crucial to the success of the lab, said Professor El-Omar.

“Given there are trillions of microbiota and we are undertaking a number of longitudinal studies, there is a large volume of data that needs to be analysed,” Professor El-Omar explained. “The funding will kick start a new iconic MRC Research program studying the Healthy Optimal Australian Microbiome (HOAM Study) and take the mothers and babies study to the next phase.”

UNSW’s Deputy Vice-Chancellor Enterprise, Professor Brian Boyle, said the partnership helps to strengthen UNSW’s work in cutting-edge medical research that could have a major impact on the treatment of common health conditions.

“The Centre provides exceptional opportunities for the next generation of researchers in medicine and allied health specialities in one hub. UNSW is proud to be working collaboratively with the SSMRF and the South Eastern Sydney Local Health District as the MRC continues to expand in 2019,” said Professor Boyle.

Each person’s microbiome is as unique and, according to studies, could hold the key to treating many conditions. Following the launch next year, the MRC will be engaged in examining the link of the gut biome to cancer, obesity, diabetes, mental health, cardiovascular health, arthritis and musculoskeletal conditions, asthma and dementia.