Solving some of the most pressing mental health issues affecting our community – substance abuse and suicide – is the focus of two Centres of Research Excellence, launched at UNSW by Ministers Tanya Plibersek and Mark Butler. 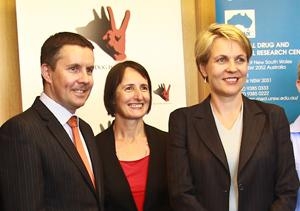 Solving some of the most pressing mental health issues affecting our community – substance abuse and suicide – is the focus of two new Centres of Research Excellence, launched at UNSW by Federal Ministers Tanya Plibersek and Mark Butler.

The Centres are charged with turning research into clinical practice as soon as possible.

Health Minister Plibersek says this is an important step in helping our most vulnerable people from “falling through the gaps”, but a “whole of nation” effort is needed to prevent suicide in particular.

Suicide is the biggest killer of Australians between the ages of 15 and 44.

“This approach will not only reduce the money spent on costly in-patient services, it will save lives,” says Professor Helen Christensen, who heads the Centre of Research Excellence in Suicide Prevention and is Executive Director of the Black Dog Institute.

The Centre of Research Excellence in Mental Health and Substance Abuse is led by Professor Maree Teesson from UNSW’s National Drug and Alcohol Research Centre.

The Centre has already started a program in high schools, to determine whether personality traits predispose young people to drug and alcohol problems, and whether early intervention can prevent them.

Three thousand students in Year 8 in NSW and Victoria are enrolled in the program. Around 40 per cent of students of this age are believed to exhibit one of four personality traits known to put them at higher risk of substance misuse: anxiety, impulsivity, negative thinking and sensation seeking.

All the students who screen positive for one of the personality types will be invited to attend two 90-minute early intervention workshops.

A similar study conducted in Britain and published in JAMA Psychiatry found targeting at-risk students decreased their problem drinking by nearly 50 per cent.

The Centres are both funded for five years by the National Health and Medical Research Council, as part of the Federal Government’s commitment to $26.2 million to mental health research.