Dr Matthew Lennon, a graduate from UNSW Sydney, will utilise the Tim Fischer Monash scholarship to further his studies in dementia research. 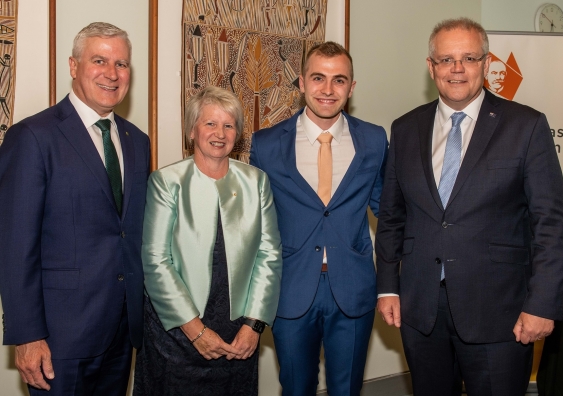 “It is an incredible honour to receive this scholarship - Tim Fisher and John Monash were both extraordinary men who have distinctively shaped the future of Australia. The scholarship is an opportunity to be part of the great Australian legacy and help shape our future for the better,” Dr Lennon said.

The scholarship was created in honour of the late former Prime Minister and the late former National Party leader. The new $10 million scholarship is awarded by the General Sir John Monash Foundation to recipients who show excellence in their field, leadership qualities and a desire to make an important contribution to society.

Dr Lennon, who received the Tim Fischer Monash Scholarship, will use the funding to complete a Master of Neuroscience at Oxford University and plans to bring better dementia research and vital therapeutics, drug trials and care back to Australia to help our ageing population in rural and remote communities.

“Dementia is a disease that has touched my family deeply. It is a disease that takes not just one’s health but the very identity of the person who lives through it. It is the tragedies both in my family and affecting my patients that has inspired me to work on this vexed area of research,” Dr Lennon said.

Dr Lennon graduated from Medicine at UNSW in 2017 with the University Medal and Class I Honours in Neuroscience. Following the completion of his degree he has worked with the Centre for Healthy Brain Ageing to explore epidemiological and genetic risk factors for Alzheimer's Dementia.

While studying at UNSW he started Springboard Education, a charitable tutoring organisation that has provided free tutoring and educational resources to thousands of students in rural Australia.

He has worked extensively within the Australian Medical Association, writing and enacting policy, as well as for the Commonwealth Department of Health and Ageing, working to resolve challenges in Aged Care for rural and remote Australia.

The 2020 Bob Hawke and Tim Fischer John Monash Scholarship was judged by an eminent group of Australians, including former supreme court judges, industry leaders, academics, leaders of business, policy advisors and scientists from around the country, following a rigorous three-stage process.