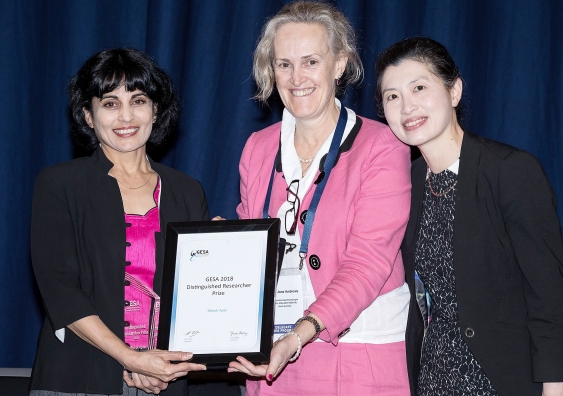 UNSW Medicine’s Professor Minoti Apte, OAM has received the Gastroenterological Society of Australia (GESA) Distinguished Researcher Prize 2018. It is one of the most prestigious awards presented by GESA, and not always awarded each year.

The award recognises the outstanding contribution to research by a GESA member. The nominee’s research contribution must have been sustained over a number of years, resulting in publications in recognised scientific journals.

“I am honoured and humbled to receive this Prize from GESA,” Professor Apte says.

“The Prize is a recognition of our cutting-edge, world-leading research into diseases of the pancreas that are notoriously hard to treat, such as chronic pancreatitis (inflammation) and pancreatic cancer.

“I would also like to dedicate this award to my mentors Professor Ron Pirola and Jeremy Wilson, and indeed to all past and present members of the Pancreatic Research Group, of which I am Director.

“This award is a testament to the hard work and determination of the whole Group to understand the mechanisms of pancreatic disease and thereby to develop novel approaches for treatment.”

Professor Apte was the first in the world to isolate and characterise pancreatic stellate cells, a cell type that is now known to play a major role in the progression of both chronic pancreatitis and pancreatic cancer. Coming up with ways to target these cells so as to prevent them from doing harm is now a major focus of the research being carried out by Professor Apte and her team.

For example, while working on a novel drug combination for pancreatic cancer that attacks not only cancer cells but also the surrounding stellate cells, the team recently published results from tests in a pre-clinical model of pancreatic cancer, showing that tumour size was greatly reduced and importantly, tumour spread was almost completely halted.

“What we hope to do next is to comprehensively test these findings in our laboratory in order to obtain robust evidence that will form the basis for clinical trials – we need to prove that what we have found works in practice,” Professor Apte says.

In her congratulatory letter to Professor Apte, GESA President Professor Narci Teoh remarked that “Professor Apte’s contributions have been recognised nationally and internationally with the awarding of several significant prizes”.

Professor Teoh also noted that “in addition to her ongoing impressive work in the field of pancreatic cancer, she remains a significant force in mentoring a number of colleagues and students. It was noted that her achievement as a mentor, researcher and your commitment to clinical care has had important influence on the career development of other fellows.”

Professor Apte is no stranger to receiving prestigious awards: in 2016, she was awarded the Professor Rob Sutherland AO Make a Difference Award at the NSW Premier’s Awards for Outstanding Cancer Research – an award that recognises highly successful research that is actively changing cancer treatment and improving patient survival.  Her contributions to medical research, tertiary education and the Indian community have been recognised by the award of the Medal of the Order of Australia (OAM) in 2014 and being named the NSW Woman of the Year in 2015.