Opinion Why do men have nipples?

How embryos develop, evolution and sexual pleasure all help explain why men have nipples. But ‘man boobs’ are a different story. 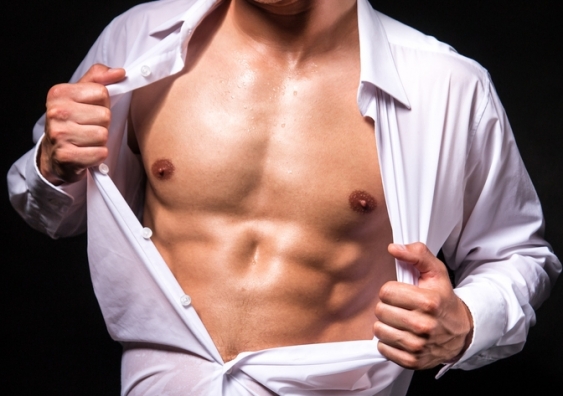 Men have nipples because of a quirk in how embryos develop. But that’s only part of the story of this seemingly redundant body part. Image from Shutterstock

Women’s nipples have long been a source of fascination and controversy, from celebrity gossip stories of wardrobe malfunctions and “nip slips” to feminist movements for gender equality. Nipples even became a fashion accessory.

Men’s nipples are a different story. While they don’t tend to attract the same type of controversy, people have long been fascinated about why men have them. The question even made it into a popular science book.

So, if (most) men don’t breastfeed, why do men have nipples? The answer lies partly in how we develop in the womb. We’ll get to male breast milk later.

A long time ago, when you were an embryo …

Very early in development, embryos of both sexes have primitive structures that can develop into either male or female reproductive organs (or rarely into a bit of both).

Several genes determine whether the baby ends up with either male or female reproductive organs. A gene called SRY (sex-determining region Y) on the short arm of the Y chromosome is considered the master gene.

But breasts and nipples start to form before the SRY gene has been activated, between weeks four and six. This is when two ridges called mammary crests or milk lines extend between the primitive armpit and the groin.

So, later in male development, even as most of the mammary crest disappears, the cells around the chest that form primitive nipples and areola smooth muscle remain. These remaining cells go on to form the final breasts and nipples. 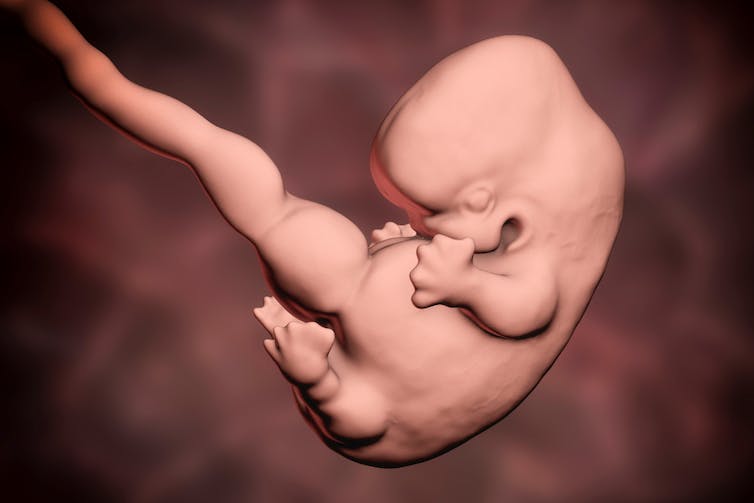 At around seven weeks, a critical gene is activated that puts embryos on the path to being male or female. But by then, critical cells that go on to become breasts and nipples have already developed. from www.shutterstock.com

At birth, boys’ and girls’ nipples and breasts look alike. It’s only at puberty, under the influence of hormones, when they begin to change. The nipples of both enlarge but female nipples enlarge more. At the same time, the ducts of the male breasts shrink while female breasts enlarge and remodel. By adulthood, male nipples are smaller and less variable than female ones.

From an evolutionary standpoint, some argue male nipples remain, not because they present any advantages for a male, but because they do no harm. There is no benefit in eliminating them.

Sometimes, as with any other body structures, development can go wrong. Around one in 20 people have supernumerary (or extra) nipples. This occurs when parts of the mammary crest remain. Often these nipples are purely cosmetic and resemble nothing more than a small pigmented mole. Only rarely are they fully functional. The highest number of nipples ever recorded on a human male is seven.

Some men can produce milk

Intriguingly, sometimes males can produce milk. In many cases, this may be caused by recovery from starvation, medical conditions that cause hormonal imbalances, or medications. The milk men produce in these circumstances is very similar to that of lactating mothers.

How do men benefit from having nipples?

Unless you’re one of the rare men who can use their nipples to breastfeed, men benefit from this seemingly redundant body part for a much more common reason.

Nipples respond to sexual stimulation in both sexes. One study found over half the male participants reported feeling enhanced sexual arousal in response to nipple stimulation. There is even one report describing a heterosexual man who requested breast enlargement to increase sexual function of his nipples.

How about ‘man boobs’?

But for some men, breast enlargement can be the unexpected consequence of being overweight or obese. And as we are seeing more obesity in western populations, we’re seeing a rise in “man breasts” or “man boobs”, which are mostly being made up of fat deposits.

Breast enlargement in men, or gynaecomastia, can also be caused by a hormone imbalance with a relative excess of oestrogens (female hormones) compared to androgens (male hormones). This mostly affects adolescent boys and usually resolves on its own, although it can persist in as many as one in 10 men. In these cases, it can be associated with depression, anxiety, disordered eating, body image problems and reduced self-esteem.

Men get breast cancer too

Unusually, men can develop breast cancer and it can have serious consequences.

Only 0.5-1% of all breast cancers are diagnosed in men. However, lower awareness of the disease in men means it is more likely to be at an advanced stage when diagnosed. That’s why lumps and changes in men’s nipples (for example, nipple discharge or skin ulcerations such as cracks in the skin), should be checked by a doctor to rule out cancers.

As we’ve seen, men’s nipples deserve as much attention as women’s nipples. Although, this is unlikely to distract the celebrity gossip columnists from their selective obsession with this part of the female anatomy.