Opinion Are they illegals? No, and Scott Morrison should know better

Conclusions that asylum seekers are "illegal" and that they should come here in ''the right way'' might seem logical, but they are based on flawed premises, writes Jane McAdam. 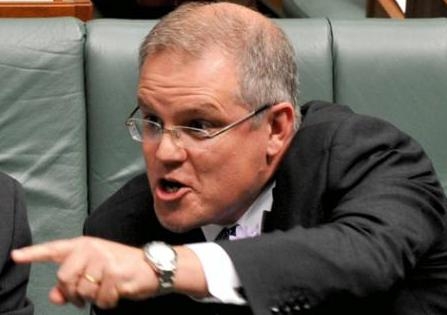 OPINION: If I listened to our politicians and relied on the tabloids and talkback radio, I would probably think asylum seekers were illegals. I would probably think they were a potential threat to our national security, and that the government was right to keep them from our shores. I might also think asylum seekers should be stopped from endangering their own lives by taking risky boat journeys to Australia, and that sending a strong message of deterrence was the right thing to do.

Or I might just think they should wait their turn until a resettlement place came up and they could come in ''the right way''.

However logical these conclusions might seem, the problem is that they are based on flawed premises.

If we don't have accurate information, then we can't help but draw false conclusions.

Scott Morrison has issued a directive that asylum seekers who arrive by boat are now to be known as ''illegals''. Terminology matters because it shapes our understanding of a phenomenon. If people are described as ''illegals'', this creates an assumption that they have broken the law and deserve to be treated as criminals.

Both these assumptions are wrong. Article 31 of the Refugee Convention - the very provision on which the government bases its use of the word ''illegal'' - says that actions that would otherwise be illegal, such as entering without a visa, must not be treated as illegal if a person is seeking asylum. This is because the drafters of the Refugee Convention recognised that the very nature of refugee flight may mean that people arrive without travel documents.

Everyone has a right under international law to seek asylum from persecution and other serious human rights violations.

Indeed, even the international treaties on human trafficking and smuggling stress the fact an asylum seeker is trafficked or smuggled must not affect their right to claim asylum and receive protection.

John Howard successfully exploited the illegals and national security idea when the arrival of the Tampa coincided with the September 11, 2001, attacks in the US. Ever since then, many Australians seem to think that terrorists disguised as asylum seekers might be trying to infiltrate our country. Why on earth would a terrorist do this?

Of all those who seek to enter this country, asylum seekers who arrive by boat are subjected to the most intense scrutiny of their identity and travel routes - and are held in indefinite detention while this is going on. It would be far easier for a terrorist to come by plane on a false passport and visa. Furthermore, the Refugee Convention has robust mechanisms to exclude dangerous criminals from protection, so this would hardly be an easy way in.

From the comfort of our lives here in Australia, most of us cannot imagine how intolerable the circumstances must be when risking one's life on a dangerous sea voyage becomes a rational decision.

If you're in a burning building and you know if you stay put you will die, but if you jump you might just survive, then most of us would jump. It's not a choice we would make in other circumstances, but at that moment, it is a logical choice.

Most Australians are dismayed by the conflict and atrocities of the Assad regime in Syria, and in the Security Council Australia condemned that violence. There are now more than 2 million Syrian refugees, most living in rudimentary conditions in Jordan, Lebanon, Turkey and Iraq. Close to a quarter of Lebanon's population now comprises Syrian refugees - the equivalent of Australia taking in 5 million refugees this year. About 4000 refugees are fleeing Syria each day.

For those who say that refugees should wait for a resettlement place, just look at the figures: 16 Western countries have agreed to resettle 10,240 Syrian refugees - not each, but in total. Australia will take 500 within the existing 13,750 refugee places set for this year. With more than 2 million Syrian refugees already, and only 10,000 resettlement places offered up, this shows just how illogical it is to insist that refugees should wait for protection to come to them.

For most, there will never be a chance of resettlement. Indeed, the idea that resettlement is the ''right'' way to seek refugee protection is wrong. The Refugee Convention says nothing to this effect and is in fact premised on protection being accorded to people who arrive spontaneously at the border.

With leadership so lacking among our politicians on the asylum issue, it is now the task of research institutes to fill this void. Next week, the Andrew and Renata Kaldor Centre for International Refugee Law will be launched at the University of NSW. It aims to move beyond the soundbites and slogans that dumb down public policy, and open up a space for questions, debate and informed opinion-making.

Jane McAdam is Scientia Professor of Law and the founding director of the Andrew and Renata Kaldor Centre for International Refugee Law at UNSW.

Australian parties in 'race to bottom' on asylum policy