The Independents were kingmakers at the beginning of this parliamentary term, and they might play the same role at its end, writes George Williams. 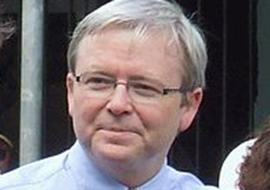 OPINION: The Australian Labor Party is entitled to choose its own leader. But unless the party also has a majority of members in the House of Representatives, there is no guarantee that its leader will be the prime minister. In the case of this hung parliament, that decision is also one for the crossbench members of the House.

As outgoing Prime Minister, Julia Gillard would advise Governor-General Quentin Bryce as to her successor. However, the decision of who to appoint is ultimately one for the Governor-General. By convention, she must commission as prime minister the person who commands the confidence of the House of Representatives.

Gillard was able to demonstrate this by entering into written agreements with a number of crossbenchers. As has been said on many occasions by members such as Tony Windsor, these agreements only bind the crossbenchers to support Gillard. They do not guarantee support in the event of a leadership change.

The question is what happens now that Kevin Rudd has deposed Gillard as leader of the ALP. All eyes should be on the independents. If a sufficient number to produce a parliamentary majority support Rudd, or at least are not prepared to support a no-confidence motion against him, his position as PM is secure.

On the other hand, if they shift their allegiance to Tony Abbott, as Windsor has suggested he might do, then Rudd will not command a majority and might not be signed in as prime minister, or his tenure might be short lived. This, though, could depend upon whether the opposition is willing to move a no-confidence motion against Rudd. Abbott might prefer to push for an earlier election than to bring Rudd down.

A final scenario is that independent members are prepared to vote against Rudd, but are not prepared to support Abbott. In this situation, Parliament could be unworkable and an immediate election may be appropriate. This might bring it forward from September 14 to as early as August 3.

None of these scenarios is a constitutional crisis. The conventions of our constitution are sufficiently clear to produce an outcome. It is not the conventions themselves that are uncertain, but the positions of the independents.

It is to them that the Governor-General will look when she exercises judgment as to who commands the confidence of the House of Representatives. Just as they were kingmakers at the beginning of this parliamentary term, so too might the independents play this role at its end.

Can Rudd reform NSW Labor? And will it save him?