As the reaction to Ed Husic's swearing-in on the Koran shows, there's still work to do to educate people about their right to follow whichever religion they choose, writes George Williams. 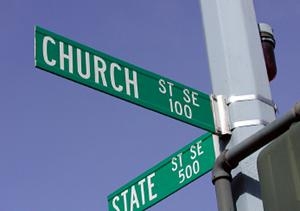 OPINION: Frontbencher Ed Husic's swearing-in on the Koran was celebrated by some, yet was the source of vitriol from others.

A common theme in many of the negative reactions was Husic had breached something fundamental in Australia's system of government. One person commented: ''How dare you disregard Australia's constitution like that. Absolutely sickening. Do we begin the push for sharia law now?''

Such concern is surprisingly prevalent. An email with a wide circulation is urging a ''no'' vote in the referendum because, ''by local government areas being recognised, sharia law can then be demanded in the local area, based on the [percentage] of Muslim people in that local area''.

The notion that permitting the Commonwealth to fund local government directly would open the door to sharia is ridiculous. Nevertheless, the charge has gained currency not because of its accuracy, but because it strikes a chord with those intolerant of the Muslim faith. When it comes to the vitriol extended to Husic, it shows a misrepresentation and misunderstanding of the basis of Australian government. This is done by asserting that, constitutionally speaking, Australia is a Christian nation.

There is evidence that can be marshalled to support this. The British law that introduced the constitution states that the people, ''humbly relying on the blessing of Almighty God'', agreed to unite in one nation. Australia's monarch and head of state, Queen Elizabeth II, is head of the Church of England. Federal Parliament begins each sitting with the Lord's Prayer.

These examples fall a long way short of demonstrating that Australia was created as a Christian nation. In fact, the text of the constitution points decisively to the contrary. It shows up things such as the use of the Lord's Prayer in Parliament as an anachronism.

The framers of Australia's constitution were steeped in the Christian tradition, yet chose to create a nation that could accommodate religious diversity. This is reflected in one of the very few human rights protections in the document.

Section 116 prohibits Australia from having a state religion, including Christianity. It also guarantees the right of every person under federal law to exercise the religion of their choice, and says that a person's religion cannot be used to determine their suitability for federal office. It provides the clearest illustration of why, as a matter of law, Husic was entitled to maintain his religion on taking his oath of office.

In any event, people seem to have forgotten Husic had already taken a like oath. When he was elected to Parliament in 2010 he was sworn in with a hand on the Koran. At the same time, Jewish MPs Josh Frydenberg and Michael Danby were sworn in on the Torah. Their right to do so is implicit in the constitution, which says members can take an oath, without specifying to which god the oath is taken.

Australian law establishes a separation between church and state, and provides for religious choice. However, the regime is not complete. The constitutional protections say nothing about the states, which remain free to prefer one religion over another, and can ban the employment of people based upon their beliefs.

All this goes to show, even though Husic was entitled to swear an oath to the god of his choice, there is still much work to do. A greater effort must be undertaken to educate the community and to strengthen our laws and practices. Both need to better reflect that Australia is built upon the right of each person to adhere to whichever religion (or not) they choose.