The period of unanimous decision making in Australia's highest court is well and truly over with Justice Dyson Heydon cementing his place as the new Great Dissenter, a review of the High Court's 2012 record shows. 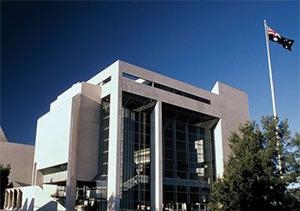 On the eve of his retirement, Justice Dyson Heydon’s reputation as a loner and dissenter on the High Court under Chief Justice Robert French has been cemented, according to a report to be presented at the twelfth annual Constitutional Law Conference.

The study of the High Court’s decisions in 2012 by Professors Andrew Lynch and George Williams, from the University of New South Wales’ Gilbert + Tobin Centre of Public Law, shows that the Court’s extraordinary ability to decide almost every second case unanimously in the first two years after the appointment of French as its leader in 2009 is well and truly over.

“In 2011, the number of cases the Court decided with a single judgment from all its members had dropped to about one in six. Last year that downward trend went further with only eight cases out of 61 being decided unanimously,” Professor Lynch said.

The authors said the decline in unanimity owed much to the presence of Justice Heydon, who continued to disagree with his colleagues much more frequently than any other member of the Court. Heydon dissented in just over 40 per cent of matters on which he sat. No other Justice who sat for the bulk of 2012 reached a dissent rate in double figures. After Justice Heydon’s 19 dissents, the judge with the most minority opinions was Justice Virginia Bell, who had a mere four.

“But the more remarkable fact about the decisions of Justice Heydon in 2012 was that he not once co-authored an opinion with any other member of the Court,” said Lynch. “That simply makes production of unanimous opinions impossible”.

Lynch and Williams suggest that one needs to go back to the High Court of the 1930s and 1940s to find a comparable example of such unwavering judicial individualism. Although Justice Michael Kirby had high levels of disagreement with the rest of the Court in recent times, he did still write with others on occasions when consensus was able to be reached.

In contrast, the study shows that Justice Gummow, who departed the Court in October, having reached the mandatory retirement age of 70, ended his tenure on the Court much as he began it. Unlike Heydon, Justice Gummow maintained extremely low levels of dissent throughout his time on the Court, since being appointed in 1995.

The authors suggest that their annual studies support evidence that Gummow was a central player in forging majority opinion on the court under three different Chief Justices. His departure provides new opportunities for judges across the Court to convince their colleagues as to different directions it might take and new interpretations of the Constitution, with the Court’s new judges, Justices Gageler and Keane, expected to play an important part in this.

Professor Lynch said:, “With any judicial retirement and new arrival the Court inevitably alters, but some changes matter more than others. The Court without Gummow J undeniably becomes a very different institution.”